More
JesuitRoundup.org is brought to you by:
Home Featured Who Is Beto O’Rourke? 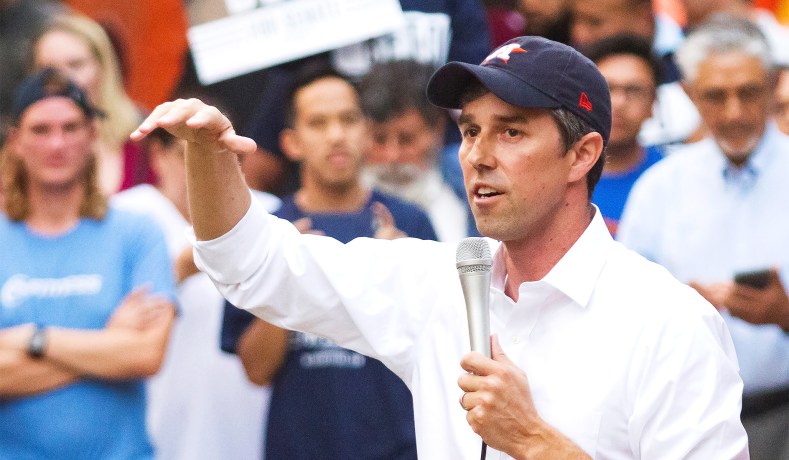 Who is Beto O’Rourke? For many, he is just a name on a sign. The sign isn’t even red, white, and blue so it isn’t immediately apparent that he’s a politician. But he is, and very soon, he could be one of Texas’s senators in Washington, D.C.

But who is he really?

Well, his campaign website describes him first as a “fourth-generation Texan, born and raised in El Paso,” a fact that he’s either very proud of or he’s using to pander to die-hard Texans. I can’t really blame him for that, he’s working against a traditionally red state, and I’ll admit, when I read that first line it did make him seem more appealing. If anything, it shows political savvy. Unfortunately, that’s not enough to win a vote; I require at least a fifth-generation claim to hop on a bandwagon.

A nice website, on the other hand, does grab my attention. Beto has a great campaign website where he’s laid out his stances on various hot-button political issues, which makes my job as a writer much easier. I’ll go through the various sections and give highlights, but I recommend that you look at the website for yourself, it is very informative.

Agriculture, the number one issue in America… alphabetically. Living in Dallas, this is a part of our nation that we at Jesuit don’t see very often; nevertheless, it remains vital to Texas’ economy. Here, Beto mostly hits on ensuring that the government supports the various agricultural industries. I was mostly interested by his support for upgrading the infrastructure in rural areas. Specifically, Beto states that, “Rural areas desperately need investments in broadband, upgrades to water and road systems, and modernized schools,” a move towards demarginalizing those outside of larger cities. One point that may rub many Texans the wrong way is his comment regarding “protecting undocumented workers” because of their contributions to Texas agriculture.

I’ve recently heard more than a few comments that Beto is a socialist. Even his opponent, Ted Cruz has made these accusations. Looking at Beto’s page on economics, though, that doesn’t seem to be the case. Although he advocates for more government involvement in the economy, that really amounts to two major points: protecting consumers and ensuring competition. I haven’t checked the definition of socialism in a couple days, but I don’t remember those being key elements. Competition is one of the most important elements of a capitalist system, and it seems to me like Beto fully supports that. But if you’d rather the government not prevent monopolies and just be ruled by Coca-Cola, Disney, and all the other massive corporations then by all means, drink some kool aid and call him a socialist.

The real make or break issue for me is education, and it seems like Beto has a plan for improving the public education system. Unfortunately, his only well-defined statement is a bandaid for the gushing wound of a problem we have right now. He says, “We should continue to take steps towards moving control to the classroom and empowering teachers to fulfill their calling by having autonomy to teach their students and reduce the emphasis on arbitrary, high-stakes tests.” I don’t think there’s a single person who has gone through the Texas education system that would disagree with that. It is a well known fact that students don’t learn what they need to when their teacher only teaches them how to pass a test, but eliminating the STARR tests and similar exams is only part the problem.

The real deciding factor for a student’s success isn’t whether or not they take a stupid test, it’s the quality of the school. Students in Highland Park Independent School District (HPISD) flourish. It’s the second best school district in the state. Dallas ISD, however, is ranked 632nd. Interestingly, HPISD also has an average household income over three times that of DISD.

Beto claims that he will “Increase public funding for low income and underserved communities,” which sounds great. But how will he do it? Where will the money come from? Higher property taxes? Guess what, property values are on the rise in Dallas so citizens are already having to pay more and increasing them again will just further marginalize the people in the poorer school districts. So, Beto must have some other plan, right? If only he would mention what it is. His support for this is so vague he might as well have ignored the topic altogether.

Beto also mentions addressing the dreaded ‘Bathroom Bill,’ or as like to call it, a waste of time and taxpayer money that only further distracts people from the actual issues with public education. At the very least, he’s against public funding for private schools, although that’s basically the participation award of education politics.

I’m going to skip the energy section because it boils down to promoting renewable sources and protecting the environment. There’s a much more important E-word to deal with anyways.

Equality. Beto’s website actually taught me something about the subject. States and territories are not required to recognize same-sex marriages. Beto wants to fix that. He also wants to “provide the same nondiscrimination protections to LGBTQIA Americans as any other protected class under federal law.” If you can’t get behind that, I don’t what to say. People are people and you shouldn’t treat them poorly because of who they are. If you don’t like that, get over it. The third statement Beto makes on the subject of equality is about closing the pay gap. I’m not going to comment on that, because I’m still hoping that there’s at least one person whom I haven’t offended yet, and I’d like to keep it that way.

The first section that I can entirely agree with is government accountability. I am of the firm belief that politicians spend too much time trying to get re-elected, sabotage their opponents, and do political favors for their donors. So I’m pleased to learn that Beto supports term limits for members of Congress, the improvement of government efficiency, and refuses to take donations from PACs. He also opposes gerrymandering. Be careful, Beto. You might end up making all of your future co-workers go broke.

Here comes the section that’s going to instantly upset people (as if the others didn’t): gun safety. To be clear, the actual website says “gun safety.” I don’t want people to claim I’m being misleading by saying gun safety instead of gun control. This one’s on Beto. Although, it really isn’t a bad strategy. What is a bad strategy though, is being intentionally vague, and Beto is very vague. Aside from the typical support for background checks that you’ll hear from most gun “safety” advocates, Beto mentions that we should ban “weapons of war,”  a term without any actual definition. It’s thrown around quite a bit, but in reality, it means nothing. I’d honestly prefer it if Beto just said “We should ban all guns!” because at least then I would know what he’s talking about.

Texas receives the vast majority of Mexican immigrants, so it makes sense the Beto has such an extensive page on it. Most of the information on the page references improving the current immigration systems to make it easier to enter the country legally. Other major points include support for the DREAM Act and facilitating current undocumented immigrants’ obtainment of legal status.

There are a few other important issues on Beto’s website, including the legalization of marijuana and access to abortion (Beto supports both), but this article is getting rather long, and there is no way I can encompass every single issue. So, if would like to know more about Beto’s policy, visit betofortexas.com, everything is laid out very clearly and I do recommend looking through it all for yourself.

Check back in soon to see me pretend to be unbiased by tearing apart his opponent Ted Cruz.