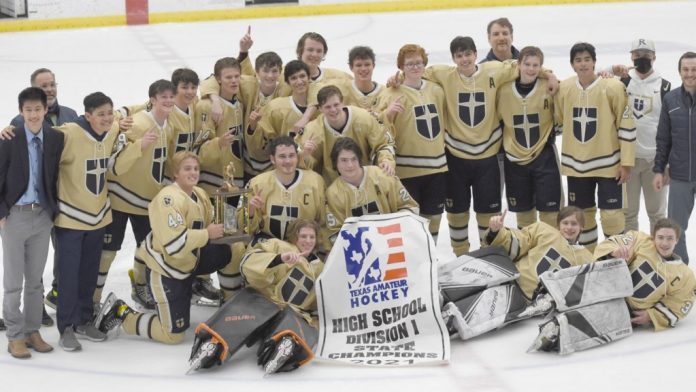 We witnessed some wacky but historic Jesuit hockey this season. But hockey is a crazy game just like others in sports, and that’s what makes it enjoyable. This season, Jesuit imprinted their names into the history books as a team who went to nationals. Let’s take a look back at the end of their 2020-2021 season:

Jesuit has a great preseason, finishing 2nd in the Leveling Tournament. They have a horrible start to the season as injuries pile up. They try to make a late playoff push, going on a 3-1 stretch in February, but it was too late. Jesuit ended the season 6-11-0.

Missing the playoffs was not the end for hockey though. They beat Allen 10-6 over 2 games to clinch a spot in Nationals. This was Jesuit’s 3rd consecutive state championship and 7th in school history.

At Nationals, Jesuit starts pool play facing off against the Springfield Cardinals (MA.) (the eventual champs) which fares poorly for Jesuit. Credit to Jesuit, they hold their heads high for the next two games.

Jesuit has a key victory versus Orange Lutheran (CA.), winning 3-1. This was their first win at nationals since 2015. Jesuit also played extremely well against North Broward Prep (FL.), but early in the 3rd period they scored two unanswered goals 16 seconds apart.

At the end of the 3 pool games, Springfield (MA.) dominated the three teams, having a ridiculous +31 goal differential. On the other hand, Jesuit, Orange Lutheran (CA.), and North Broward (FL.) were all tied with one win. The tiebreaker was determined by whoever had the best goal difference between the teams in the tiebreaker. Jesuit went +1, North Broward -1, and Orange Lutheran 0. So, as a result of the tiebreaker, Jesuit, for the first time in its history, made it out of pool play into the quarterfinals.

While Jesuit fared poorly against the eventual runner-ups, New Trier (IL.), they definitely had a successful run at Nationals.

After showing promise in the Leveling Tournament, but falling apart in the beginning of the season, Jesuit had probably not only one of the greatest comebacks in its history to a season, but also made it out of the pool games at Nationals for the first time in its HISTORY.

In my opinion, this is one of the memorable season in Jesuit Hockey history despite the record. The team should be proud for not giving up and fighting through all of the adversities.

I really wonder what would have happened if Jesuit did not endure all of the injuries and problems with Covid-19 in the beginning of the season. I truly believe that they make an even more historic run, having a great a position in making the playoffs and possibly winning the championship while also still having a great run in championship.

To finally end things off, I hope Jesuit wears more Gold next season. Call it superstition but they perform better with Gold on, not Blue.