In the unrelenting dry heat of Phoenix Arizona, under the lights of Chase Field, the Arizona Diamondbacks faced off against their division rivals, the Colorado Rockies, and fought for the final spot in the MLB Playoff bracket. The two teams, both hailing from the tightly contested NL West, which sent three teams to the playoffs, were vying for a position in the NLDS against the NL West pennant winning Dodgers.

The Diamondbacks and Rockies sent out their aces, Jon Gray and Zach Greinke respectively, to face off in the one game playoff. Jon Gray, Colorado’s third year ace will face off against the much more experienced Zach Greinke, who has 9 previous playoff starts under his belt, in his first playoff start. Clearly outmatched on the mound in both experience and skill, Gray, who posted a respectable ERA of 3.67 along with a 10-4 record, needed to rely on the Rockies strong offense in order to hold off the Diamondbacks. Greinke, who’s 3.20 ERA was good enough for tenth best in baseball, on the other hand was the Diamondbacks key to victory against a powerful Colorado offense. 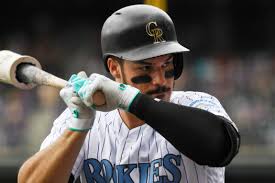 Led by a slew of strong hitters, The Rockies explosive offensive was apparent for the entire season. Posting the second highest team batting average, the Colorado Rockies offense raked in 793 RBI’s, good for fourth in the league, despite having the 10th least home runs this year. Colorado’s Nolan Arenado and Charlie Blackmon combined for 234 RBI’s alone with the pair posting the 2nd and 13th best batting averages in baseball at .309 and .331 respectively and the 12th most homers with 37 each. The key to success for the Rockies will be relying on their hitting to cary their weak and inexperienced pitching staff. 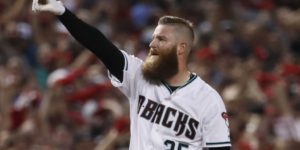 Jon Gray, Colorado’s inexperienced rookie ace, was chased off the mound after 1 1/3 innings by the diamondback who put up 4 runs, largely thanks to Paul Goldschmidt who launched a three run homer on a pitch Gray described as an overthrown “curveball, glove side, down.” Zach Greinke allowed 4 ER over 3.2 innings and from their the game  was decided by the bullpen. The game remained close into the bottom of the 7th at 6-5 Diamondback. After putting up a run in the top of the inning to cut the Diamondback’s lead to one, the Rockies let up a triple, one of four, to relief pitcher Archie Bradley, which scored two runs and opened up the floodgates leading to a 11-8 victory over the Rockies. 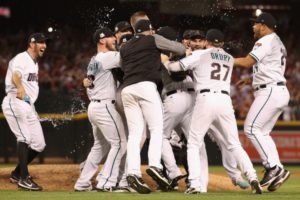 The Diamondbacks will now face the Los Angeles Dodgers, who, behind strong play from Cody Bellinger and Joc Peterson and one of the leagues best pitching rotations, have managed to shock the world and post the best record in the MLB (104-58). The Diamondbacks will need a combination of luck, extraordinary play from their stars, and a miracle from the pitching staff in order to steal the NLDS from the Dodgers.