More
JesuitRoundup.org is brought to you by:
Home Viewpoint Culture Is Abstract Art Intrinsically Valuable? 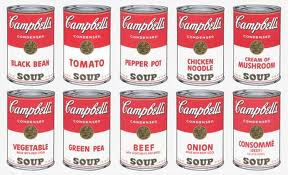 Introduced into the Congressional record in 1945 amidst the pinnacle of the second Red Scare, “The Forty-Five Goals of Communism” was intended to subvert America on a cultural level with a communist agenda. Of course, this never came close to happening, but some of the tenets concerning art and music still remain, even though they never resulted in the communist take-over of the U.S.

For example, goal 22 aimed to “continue discrediting American culture by degrading all forms of childlike expression… to substitute [real art with] shapeless, awkward and meaningless forms.” Overall, the accumulated plan was to promote ugliness though repulsive and meaningless art, and in a sense, they’ve been successful. There is a prominent distinction between art that is valued for its objective qualities, and art that’s valued simply because it is displayed in museums and is referred to as “art.”

I remember being introduced to the works of Andy Warhol at a very young age and reacting in a confused way. I had seen other works of art that immediately stood out to me as being aesthetically pleasing and works of true talent. However, Warhol’s Campbell’s Soup Cans painting, among others, struck me as especially odd.

I couldn’t understand why Warhol, devoid of any noticeable technical accomplishment, was considered to be an accomplished artist; at the time, I realized that there must have been a historical and cultural significance behind the painting that conferred value (and because my primary school art teacher told me so).

This year, in AP U.S. History, I once again found myself running into Warhol’s works, and my initial reaction wasn’t pleasant. Under this context, however, I learned that the painting was part of a reactionary, anti-consumer backlash of the 60’s. The cultural significance of the work assuaged some of my doubts concerning the portrait, yet I still don’t admire the work for its artistic merit.

However, not all art is as such. In Salvador Dali’s Galatea of the Spheres, Dali utilizes equidistant spheres in which the sum of their parts portrays the whole:  the image of Dali’s wife, Gala. Furthermore, we know intrinsically that a painting like this not only requires great creativity, but also great powers of spacial awareness, knowledge of how the body moves and of three-dimensional space. This knowledge is not enough on its own to create a masterpiece, however; it must be coupled with a technical and mathematical ability to reproduce the image within one’s mind and then reproduce it by hand on a medium. Viewers are able to gauge instantly the technical and aesthetic beauty of Dali’s piece and even if Dali did not paint it, whoever did create the painting would still be credited with a great accomplishment.

The same is not true for Warhol and his works, which would neither attract the attention of wealthy investors nor be hanging in museums if he had not created them. On one hand, we have art that is valuable according to the visceral perspectives of most human observers; on the other, we have works of art that are only considered to be masterpieces because they were created in a certain milieu- a quality by which we should not judge art.