More
JesuitRoundup.org is brought to you by:
Home Reviews Music Reviews Father John Misty deals with true love and sincerety on <em> I Love You, Honeybear</em> 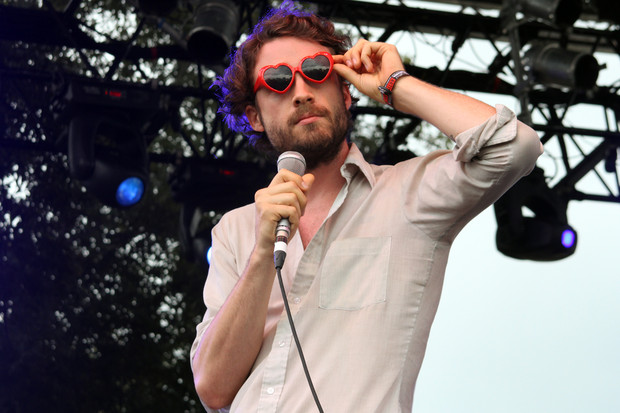 Father John Misty is in love. Madly in love. But promotional performances for Father John Misty, aka Josh Tillman’s, sophomore album I Love You, Honeybear tell a different story. When the Fleet Foxes ex-drummer appeared on Letterman, he sang a cynical and satirical yet gut-wrenching and eye-opening ode to the very country that promised him freedom and opportunity.  Sitting in solitude and clad in a fine suit, Tillman belts “They gave me a useless education/ And a subprime loan/ On a craftsman home!”- and laughter filled the room. Simulated, of course: how could anyone laugh at someone so miserable, about such middle-class, relatable problems? There was a bit of reluctance in the audience’s applause, but the praise and cheers found their way towards Tillman. “Bored In The U.S.A” is one of the 11 tracks on I Love You, Honeybear, Tillman’s second album under the Misty moniker. It is an album so open-hearted it’s intimate, so sweet but so cynical it would make Kurt Vonnegut weak at the knees; but, above all, it’s incredibly honest and convictive. Father John Misty is a folk singer at heart, but on I Love You, Honeybear Misty’s arrangements come off as more eclectic, more grand, and more varied. And while almost all of the tracks fit into one cohesive package, Honeybear, and Tillman, are full of contradictions. With a folk focus, you’d expect his music to be soft and mellow; his lyrics, sweet and lacking in profanity. But the more you listen, the more you begin to see the real man behind the mystical Father John Misty.

I Love You, Honeybear is a concept record, predominantly about the different aspects of Tillman’s relationship with his wife. At times the moods and emotions poured into the songs can be applied to anyone’s love life, but every lyric and note is a snapshot into the life of Josh and Emma Tillman’s amorous relationship. The opening title track peers into Tillman’s overall perception of his wife, but also delivers the emotional glop of scope the album later delivers. With no solid structure lyrically, Tillman rants on an on, each lyric delivered with heartfelt beauty. The following track “Chateau Lobby #4 (in C for Two Virgins)” explores Tillman’s sex life, with an enormous chorus and an interesting instrumentation diversion, which artfully segues from basic folk to mariachi horns towards the back end. “The Night Josh Tillman Came To Our Apartment” starts off sounding like something from The Velvet Underground’s debut, while “When You’re Smiling And Astride Me” is all soul and emotion. While the tracks here mostly deal with love, the track “Nothing Good Ever Happens At The Goddamn Thirsty Crow” features one of the most interesting approaches Tillman has put forth. The track begins with Tillman describing a night at a bar, LA’s The Crow, and how he’s unavailable while turning down numerous women. Then towards the second half of the song he bashes on the multitude of men hitting on his wife proclaiming “Doesn’t take half that long for men about town to forget what’s mine/ Now my genius can’t drink in silence/ She’s gotta listen to your tired-ass lines,” all while sounding like a wounded animal in a painfully powerful tenor. But the lyrical and musical gems don’t end there. Tillman switches things up a bit with “The Ideal Husband” which satirizes Emma’s portrait of an ideal husband by listing things that don’t make an ideal husband. And the song is the rawest and grittiest track Tillman has ever made, complete with a driving force and a guitar solo tha’ll make paint peel off of the wall. The aptly titled “Holy Sh*t” was written on Tillman’s wedding day and describes his mindset upon making the life changing decision of saying “I do”. Moreover, the song explores how one makes such a decision in the face of the potential unhappiness and failure. After all, nothing is guaranteed. Holy Sh*t, indeed. The track ‘True Affection” attempts to expand the variety of styles on the album, but its electronic approach sticks out like a sore thumb rather than stand out on its own.

Tillman then closes off I Love You, Honeybear by going back to the beginning: when he first met his wife in a parking lot. Tillman nostalgically recounts everything about that day, as if he’s telling his children a story. Tillman says “For love to find us of all people/ I never thought it’d be so simple,” and we can tell that Tillman is in love. With life, with his wife, and with everything. Despite the ups and downs that this record holds, “I Went To The Store One Day” is a moving testament, that makes the whole ordeal worth it. I Love You, Honeybear is a beautiful piece of work, artfully blending Tillman’s life with his alter ego, the enigmatic Father John Misty. Everything in the album is beautifully developed; from the lyrics, the structures, the concept, and the instrumentation – Tillman’s full life is on display for the whole world to see. The album’s idiosyncrasies are well thought out, giving us a compelling and interesting personality to listen to. Tillman’s message boils down to this: Love people. Be open. Get out there. Live life. Without it, Tillman wouldn’t have delivered the following line, a line that made this whole album possible: “Seen you around. What’s your name?” – which were the first words he spoke to his wife. When looking at where they are now, taking the risk and jumping in with two feet doesn’t sound too stupid to begin with. The Word has already been delivered. I Love You, Honeybear is Father John Misty’s sermon, and the mic has been dropped. Go forth, and spread the good news.

FAV TRACKS: I Love You Honeybear, Chateau Lobby #4 (in C For Two Virgins), The Nigh Josh Tillman Came To Our Apt., When You’re Smiling And Astride Me, Nothing Good Ever Happens At The Goddamn Thirsty Crow, Strange Encounter, The Ideal Husband, Bored In The U.S.A, Holy Sh*t, I Went To The Store One Day