More
JesuitRoundup.org is brought to you by:
Home Sports Football Big Win for Freshman A Team, Not so Much for B Team 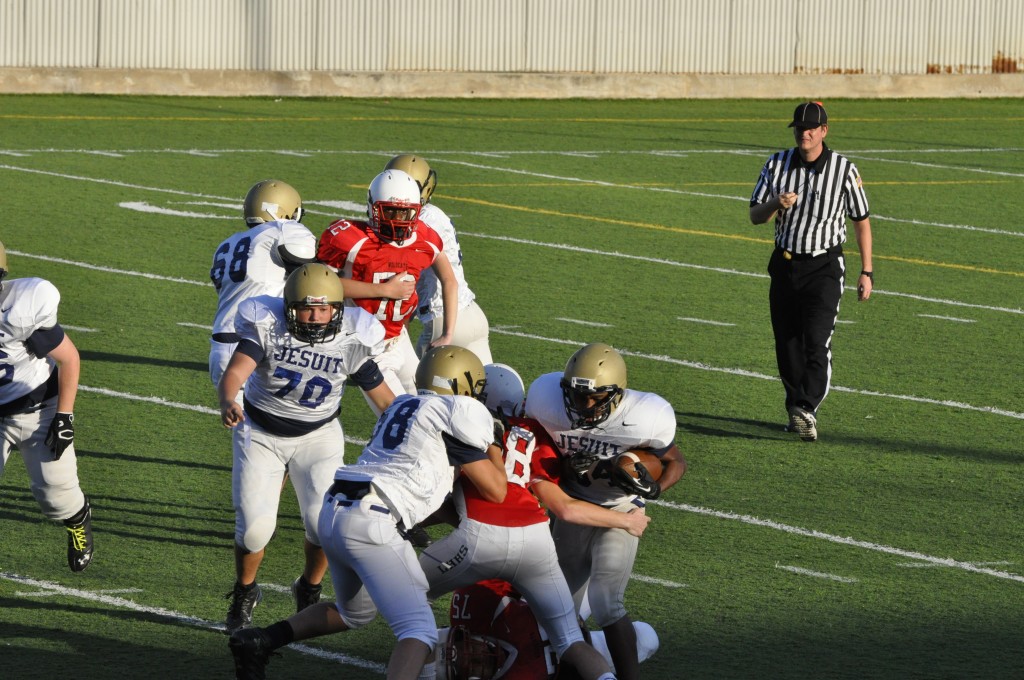 Two weeks ago the freshmen of Jesuit football took the field against the traditional powers of Skyline and Lake Highlands. The Gold team made Jesuit football history by defeating the fierce Raiders for the first time in recent memory. On the other hand, the Blue team suffered their second straight loss in a rout by Lake Highlands.

The Gold team, for the second time this year, played Skyline, but became the first Jesuit team, varsity or otherwise, to beat a Skyline football team in the recent history. The Rangers dominated in a 30-19 win. The game got off to a quick start, with a safety on an attempted punt by Skyline and a Jesuit touchdown shortly following that, giving them a 9-0 early lead. Wide Receiver Mark Ready,  ran the ball in for six to give Jesuit the 9-0 lead. The high flying offense was led by quarterback Jacob Palisch, who is still sporting the number 85. Palisch, formerly playing wide receiver,  “had a great game” said Head Coach Bob Wunderlick, when asked about the replacement’s play. As for the defense, they are deserving of as much credit for the win as the offense. The coaches mentioned defensive lineman Michael Majorie and corners Matt Delong  and Stevie Rodriguez, and others, proved they are great leaders on and off the field and were given much praise about their performances in the game. Another notable expression of the coaches’ recognition of the teams achievement came when they “gave the game MVP’s to the whole team because everybody played well.” The Gold team played one of their best performances this season.

The blue team suffered a man handling by Lake Highlands with a final score of 42-7. Slot receiver Will Naquin had the teams’ only touchdown. The pass came from quarterback Wyatt Johnson. The blue team’s regular starting quarterback, J.J. Montenegro, was out this game. Coach Wunderlick explained “The blue team is 4-3. They are 4-0 against teams that are…comparable to them (B teams)….but 0-3 against teams that are better (A teams or JV).” Coach Wunderlick wants both of his teams to succeed. He wants the A team to finish 3-0 and the B team he wants to improve from their loss. And he feels that they have improved. He said that both teams put in hard work every day that they step on the field. “Jake Pagal (of the blue team) has become the leader of the offensive line” says Wunderlick. He also mentioned the blue team’s defensive backs Billy Daly and Reece Ellison. Coach feels that these players, along with others, have matured to become leaders by example. Clearly he is very proud of this football squad.

Both teams fought their absolute hardest, but in the end, the blue team did not succeed. The A team with their historic win against Skyline, played one of their best games of the entire year. The blue team had a heart breaking loss to a Lake Highlands A team. Congratulations and good luck to both of these teams as they put in their time and effort dedicated to football.