After this year’s Super Bowl performance, a curious development occurred following the halftime performance featuring Coldplay, Bruno Mars, and Beyoncé: outrage. It seems that Beyoncé’s new song, “Formation,” has gotten a different type of notoriety than her previous releases, and the content, message, and performance of her song has elicited outrage among certain sectors of the public. Some of those outraged at Beyoncé even planned to protest at the NFL headquarters in New York, but only pro-Beyoncé fans came out to counter-protest.

Is there a legitimate reason to be so vehemently anti-Beyoncé after she performed her song “Formation” at the Super Bowl? Simple answer: no. And considering how pop culture and racial issues frequently intersect, whether that’s in musical performances at sporting events or in movie award shows, it’s important to examine what about Beyoncé’s song and performance was deemed racist and why that’s simply not the case.

“Formation” beats to the tune of a very different drum compared to Beyoncé’s past hits. The song has been described as “unapologetically black” and at its core is a song written to celebrate blackness, from her daughter’s natural hair to plantation houses to hot sauce to even Red Lobster. Much of the video is centered on her and her parents’ Southern black roots that stretch from Alabama to Louisiana to Texas, which is why much of her video centers around New Orleans. Through her choice of setting, she creates deeper racial undertones and a profound racial message: black lives matter and black life should be celebrated.

The racial message of the video, however, could not be any clearer than in the imagery regarding police brutality, from the sinking police car, to a black boy in a hoodie dancing in front of police officers, to the spray-painted message of “Stop Shooting Us” on the wall. That imagery alone led to calls of Beyoncé being “anti-police,” even though the message of “Stop Shooting Us” is simply a call for an end to the tragic, brutal killings of unarmed black people like Trayvon Martin, Eric Garner, and Tamir Rice that often come at the hands of police (or armed neighborhood watch coordinators), a statement that shouldn’t be controversial to anyone at all. 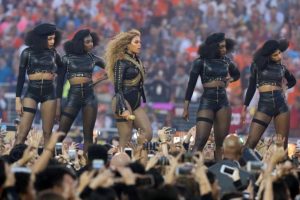 Much of the anger about “Formation” was directed at the very clear allusion to the Black Panther Party during the Super Bowl performance, with Beyoncé’s backup dancers wearing stereotypical Black Panther outfits and forming an “X” on the field as a reference to Malcolm X. However, conservative personalities (like Tomi Lahren and Rush Limbaugh) calling this “racist” or “reverse racist” is just simply incorrect and ignores both the history of the Black Panther Party and what racism even is.

First of all, “reverse racism” isn’t even a thing. Racism describes a system of disadvantages based on race, and the simplest explanation is that it requires a combination of racial prejudice and systemic institutional power. While anyone can be prejudiced against anyone else, systemic institutional power is held by white people—American society was historically set up to benefit white people at the expense of non-white people through the legal system, cultural norms, media representation, etc., and today, power in business and government remains in the hands of white people. To say that people of color can be racist towards white people as a group denies the institutional power imbalance inherent in racism, as people of color do not possess the societal or institutional power to systematically oppress white people even if individual persons of color are acting on racial prejudice—it’s not necessarily anyone’s fault, it’s just simply the way the system has been set up. The only way Beyoncé’s Super Bowl performance could be “racist” is if she were participating in the system of racism by discriminating against people of color. But that’s very clearly not what occurred during the halftime show, and it’s not even the case that her performance highlighted prejudice or discrimination against white people by using the imagery of the Black Panther Party. 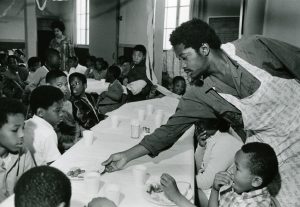 Rather, the Black Panther Party was formed to protect the black community from police brutality, in essence “policing the police” by legally arming black people and keeping watch over police activities. The Black Panthers were notable for having a nonviolent, armed protest in the California state Capitol building against a bill to prohibit openly carrying weapons that was supported by then-Governor Ronald Reagan and the National Rifle Association. The Black Panthers had actually been turning toward social programs that provided free food and clinics to the black community (notably a free breakfast program that served 20,000 meals a week in 19 different communities) and away from their original stated goals of arming the community and providing self-defense from police brutality, until J. Edgar Hoover, first director of the FBI, targeted the Black Panther Party in an attempt to destroy it; police raids brutally murdered Black Panther leaders like Fred Hampton and Mark Clark, who were shot by police between 82 to 99 times when Clark fired only once, and that was later determined to be the result of a reflexive death convulsion after he had been shot.

And what did the Black Panthers want to warrant targeted persecution by the federal government? Decent housing, education, an end to police brutality. These were some of the radical things the Black Panthers articulated in their ten-point program. These are the things that are clearly lost in many people’s understanding of the Black Panther Party. (If you’re interested in learning more about the Black Panthers, PBS aired a two-hour, very highly rated documentary in mid-February that’s free to view here until March 18, 2016.)