More
JesuitRoundup.org is brought to you by:
News US REFUSES to Send Diplomats for 2022 Beijing Olympics – Why?
Facebook
Twitter
Email
Print 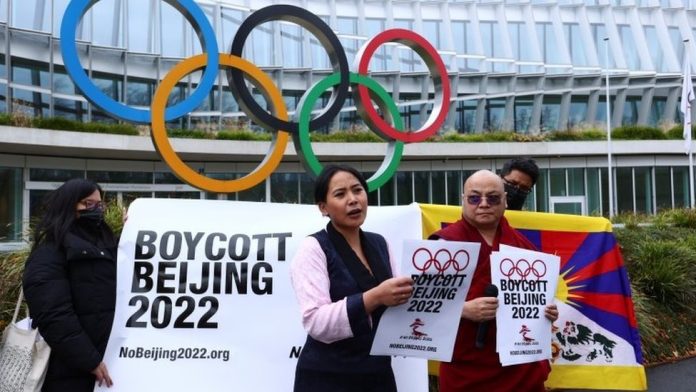 On December 6, 2021, the White House announced that it won’t send political representatives to attend the 2022 Beijing Winter Olympics. This came after the global condemnation of Chinese human rights violations and suspicious military activity.

This bi-partisan motion represents the struggling relationship between the two nations, and many are wondering if the decision is a meaningless gesture or a potent jab at China’s authoritarianism.

Maritime disputes in the South China Sea originate as far back as 2009. 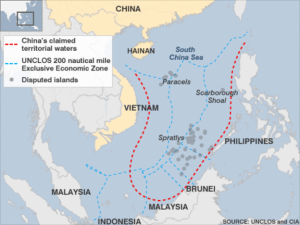 Vietnam, the Philippines, and Malaysia have all attempted to expand their 200 nautical-miles Economic Exclusive Zone (EEZ) deeper into the South China Sea. China determined this a threat to their territorial claims and responded ferociously. They began the process of pumping up ocean sand to create artificial islands, then claimed these new islands as their sovereign territory. These islands are small; however, they allow China to claim vast ocean territory.

Their greater scheme is to conquer the entire South China Sea, impeding on other nations’ EEZ and dominating regional trade. Other countries have called this the “nine-dash line” plan and China justified the plan by claiming cultural ties to the nautical territory.

If successful, they will control a maritime passage that receives an annual 3.37 trillion dollars in trade revenue. This – along with the trade influence China already has – will solidify the nation as a commanding trade partner with monopolistic abilities.

China is also opposed to U.S.-backed democracies in the region, particularly Taiwan. The small island has been governed separately from mainland China since 1949; however, the Chinese government still sees Taiwan as a rebellious state. In October 2021, Taiwanese officials recorded an unprecedented 52 Chinese warplanes flying near Taiwanese airspace, thus sounding global alarms.

By honoring the “One-China” policy, presidents Trump and Biden agreed that mainland China is the only Chinese government, but still recognized Taiwan’s complete sovereignty. Furthermore, both presidents have increased military support to Taiwan with troops and machinery, escalating tensions even more.

Taiwanese president, Tsai Ing-wen, stated her nation “is on the front lines” of protecting democracy and that other “democratic countries should come together to stand against [China]”

Unfortunately, Chinese malpractice doesn’t end with territorial disputes. It’s no secret that the communist regime has stomped out religious practices ever since its creation in 1949; In this way, China is similar to previous authoritarian states, like Lenin’s USSR and Pol-Pots Cambodia.

China is targeting Christians, Buddhists, and the largest persecuted religious group – Uyghur Muslims. Particularly, the Uyghur population in the northeastern Xinjiang province of China has undergone the installment of a police state. Abundant surveillance cameras, police checkpoints, banning of traditional Islamic practices (growing beards for men and wearing burkas for women), and the destruction of Mosques are commonplace. This is all in an effort to erase the Uyghur culture and replace it with Han Chinese culture.

To help visualize this oppression, here’s a short video by Vox which records the situation well.

Greater atrocities occur in Xinjiang’s “De-extremification Camps,” a euphemism for internment camps filled with forced labor, mental, and physical torture. Uyghurs are taken there on unproven or false charges, often collusion against the local government, and then are bombarded with Chinese propaganda.

Reports from escapees claim that beatings, forced sterilization, and forced abortions are methods to enforce population control, thus earning the genocide designation from former secretary of state, Mike Pompeo, prior to the end of the Trump administration.

Why suppress these people? 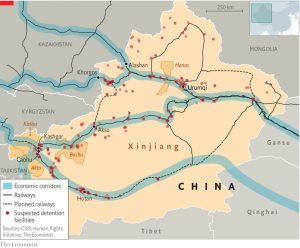 The answer: the Xinjiang province is a vital corridor for China’s railroads and resource pipelines: they can’t afford a rebellion in a region disassociated with the largely secular Han Chinese culture.

Satellite imagery and internet communication paint a vital, but clouded picture of the reality in Xinjiang. During the end of WWII, when allied troops liberated Nazi concentration camps scattered across Europe, they were astonished by the amount of murder; reports from Jewish refugees and other informants understated the cruelty of these camps. A similar situation can be occurring in Xinjiang. Perhaps the degree of murder doesn’t match that of 1945 European Jews; however, forced abortions and sterilization might not be the worst forms of torture in these camps.

The Free Hong-Kong protests, occurring from 2019-20, fought to maintain Hong-Kong’s specialty status, separate from Chinese rule, while still being Chinese territory. It was a glorious display of a people fighting for their freedom, but it ended tragically. What is even more tragic was the display of global cowardice from observing countries.

Chinese activity in suppressing the protesters and rioters was completely legal and maintained a deal signed numerous years ago, which promised Hong Kong’s assimilation back into the governance of mainland China. Because China didn’t violate sovereign boundaries, the national response was primarily verbal and had few punishing policies.

The Trump administration passed a bill that sanctioned Chinese authorities who enforced the assimilation, and many nations scrutinized China’s actions, but they didn’t go any further.

Popular organizations like Nike and NBA teams have refused to criticize China or have pathetically apologized to the PRC for previous critiques. LeBron James, player for the Los Angeles Lakers, and James Harden, player for the Brooklyn Nets, have openly proclaimed their love for China without acknowledging their humanitarian abuses.

Only recently did Ennis Kanter, a player for the Boston Celtics, openly come out in protest of Chinese human rights abuses and the immorality of his fellow NBA players.

China’s Response to the US’ Diplomatic Boycott

China brushed off the boycott with little to no scratches and responded with taunting remarks. A Foreign Ministry spokesman claimed the US “violates the principle of political neutrality of sports established by the Olympic Charter . . . [and] will pay a price for its practices.”

He also stated this diplomatic boycott is formed from “lies and rumors” and that “no one would care” whether US diplomats attended or not.

Politicians calling for boycott #2022BeijingOlympics are doing so for their own political interests and posturing. In fact, no one would care about whether these people come or not, and it has no impact whatsoever on the #Beijing2022 to be successfully held.

Australia, Britain, and Canada have signed with the US and will not send diplomatic representatives either. Still, the intensity of this protest seems inane, especially compared to previous Olympic boycotts. In 1980 a US-led boycott resulted in 44 countries not sending diplomats or athletes to the Moscow Olympic games; it was a powerful statement against the intolerable USSR, even if it only heightened Cold War tensions.

Senator Tom Cotton (R-AR) preached his disappointment with Biden’s handling of the “genocide Olympics.” He stated, “[The athletes] have been failed by the leaders of the international Olympics movement, who should’ve never awarded these games to a communist tyranny.” He advocates for a complete boycott by not sending diplomats, athletes, or corporate sponsors to the Beijing Winter Olympics.

What do Jesuit Students and Faculty Think?

Mr. Wester, a world history teacher and info commons moderator, said “of course [the US] would” boycott the Olympics. He continued, “There are adults that are very aware of the [conflict] that China and the US are involved in with Taiwan. And the [confusion] of whether coronavirus is a manufactured bioweapon, or appeared in a wet market is still unanswered.”

It’s interesting to see the focus on [the boycott], instead of the focus on [the American people] decoupling from Chinese manufacturing and processing. Until we really do that, we aren’t shoring up our economic foundation against Chinese destabilization.”

When asked if this boycott could be a symbol of greater condemnation of Chinese malpractice, Mr. Wester stated “it’s just puffery politics – kabuki theatre.”

Aarin Jain, a senior and local political pundit, stated “it’s ironic that the US is boycotting the Beijing Olympics over human rights abuses. The US does the exact same thing within its borders by militarizing and giving unfettered range to the police, and unlawfully detaining people in Guantanamo Bay.”

The 2022 Beijing Winter Olympics begin in February and the boycott hasn’t gained much traction with other countries. Time is running out and China’s trading power seems to have silenced most nations. I suspect the boycott will have little effect in sparking more national condemnation and, more importantly, action against China’s authoritarianism. In our current time of political spinelessness, the best way to show your condemnation is to inform family and friends of the current situations and refuse to watch this year’s winter Olympics.

Tune into the Roundup for more political coverage!