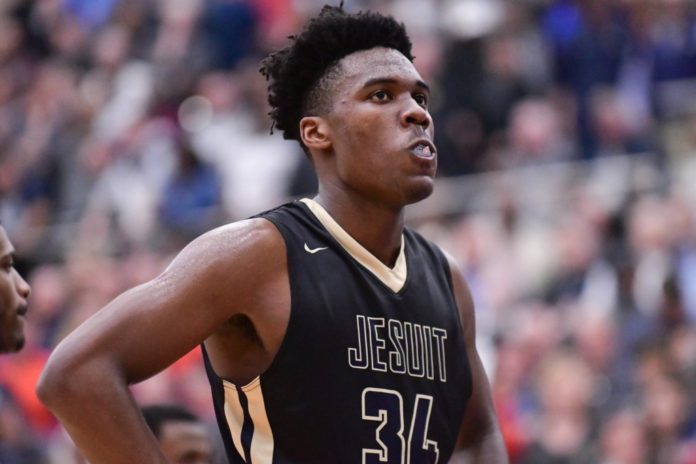 The #5 ranked team in the state, only 6 losses the entire season, a .829 winning percentage on the season, and a 12-2 district record. These statistics represent a few of the 2019 Jesuit Varsity Basketball team’s many achievements during this season, as it concluded on Tuesday, February 26th, against South Garland.

The game started out rough for the Rangers, shooting 0-5 from the field as South Garland jumped out to an early 6-0 lead. The Rangers took a while to warm up, but by the end of the quarter the score was 8-12.

In the second quarter, the Rangers continued to struggle from behind the arc but through Julius Marble ’19, they were able to score field goals in the paint. Notably, with 2:21 left in the second, Connor Wilson ’19 made a spectacular hustle play as he chased down an offensive rebound, crashing into the stands as he sacrificed his body to set Max Abmas ’19 up for a wide open three. On the play, Wilson tore his ACL due to his rough landing, rendering him out for the rest of the game. The score at half was 20-25. 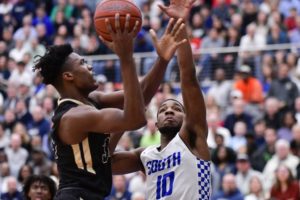 For the 3rd quarter, the Rangers and Colonels essentially stayed even, as when one team scored the other quickly would answer back. The score was 38-30 as the fourth quarter began.

South Garland went on a positive run to begin the fourth, as with 4:26 left in the game they had taken a 14 point lead. With solely half a quarter left to play, and on a night of overall bad shooting, most teams would have given up at this point. The Rangers, however, aren’t most teams. 2 made free throws from Gavin Perryman ’21 started the run for the Rangers, as layups from Abmas and Hollerich brought the differential down to 8. 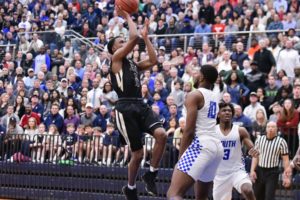 Seconds later, Abmas made his way to the free throw line, and was able to bring the deficit to just one point. Sadly, despite all the Ranger momentum, their run went South here as Tyrese Maxey scored a layup, bringing the lead back up up 3. With a missed three by Abmas, the game was all but over as Jesuit attempted to make a full court pass to tie the game, but it was swatted down. The final score was 52-58, as the Ranger’s playoff run ended.

After the game, Coach Chris Hill said “Hats off to South Garland, they played a great game. I was very proud of how we competed and fought back. That may have been the best atmosphere of any high school game I have ever been to, let alone been a part of. It was a very exciting game, obviously I wish it had gone our way, but it was a great game to be a part of.”

In order to succeed at this level of basketball, it takes more than just individuals playing isolation basketball in order to win, and requires a strong team chemistry. This team, with many of the seniors having played with each other for two or three seasons, possessed an extraordinary amount of chemistry, as the players put their egos aside for the betterment of the team.

Through all the hard work the team put in together, they grew closer to one another as the whole team embodied the ideal of Jesuit brotherhood instilled in the students every day. This was exemplified after the loss, as despite just losing a close playoff game, the whole team chose to visit their injured teammate and brother, Connor Wilson.

Despite falling short of their goal of winning a state title, the Ranger’s season was by no means a letdown, as they finished with a remarkable 29-6 record on the year. In addition to this, the Rangers won both the Lone Star Classic and the Knights of Columbus Classic tournaments.

As another chapter of the Jesuit basketball team comes to a close, Coach Hill wanted to mention how “We are so grateful for the support this community gave us this year. The crowds we had and the excitement they brought made a huge difference for us and created an exceptional atmosphere. This team accomplished a lot this year but the overwhelming feeling right now is that of gratitude.”

The Rangers had a great season, and while the potential was there for a deep playoff run, the cards just weren’t in their favor. This outcome doesn’t underscore the careers of the players graduating this year, and if anything proves just how successful they became after four years of hard work and dedication.

So, to close up the season, a quote from Dr. Seuss nicely wraps it up as he says “Don’t cry because it’s over, smile because it happened.”