More
JesuitRoundup.org is brought to you by:
Home Profiles Faculty & Staff Father Edwards: A Vocation Found in a Wastebasket 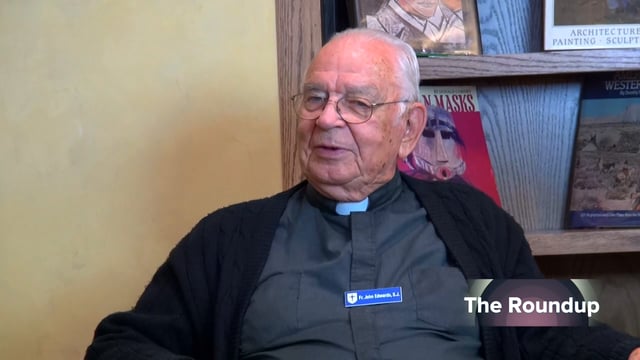 As I began my process of interviewing the man known as Father Edwards, S.J., I wasn’t sure what to expect or anticipate when interviewing someone of such stature and nobility. Since I had never met the 90-year-old priest in person and I had only heard about his plethora of  accomplishments, I suddenly became slightly intimidated. I was confident, however, that I would hear incredible testimonies to his character from his peers and dear friends alike. That became abundantly clear as I conducted my interview.

Fr. Billy Huete, rector of the Jesuit Community, believes that the Father, “embodies what it means to be a Man for Others.” Huete continued, “He is a very generous person… he’s the kind of person that anything he can do for you he will do for you… in the community he always wants to help.” Fr. Huete added, “As you go through the halls, if you happen to see him, if you say hello to him or stop and talk to him, he’ll be happy to stop and talk to you because he’s very friendly and likes to talk to people.”

Similarly, Mrs. Diane Camara in the Jesuit Records Office thinks “it’s important to have a person like [Fr. Edwards] in the community.” Mrs. Diane Camara has known Fr. Edwards since he came to the community about 5 years ago. She commented that “he prays a lot; he’s a very holy man.” She continued, “He loves to say the rosary. He says the rosary every day. He’s got a soft spot in his heart for that… I think the most special thing about him are his relationships with people.”

She elaborated, saying, “you feel like you’ve known this person you’re entire life… he’s so easy to talk to. He makes himself available for you.” She went on to comment that she “think[s] people have this mysterious feeling about priests. Like they’re sort of ‘untouchable’, he’s so touchable as a person because he really enjoys the connections that he makes with people.”

Mr. Mike Earsing, President of Jesuit, has known Fr. Edwards for “37 years off and on” since Earsing first came to Jesuit at it’s current location. He explained that “[Father Edwards has] gone with me on plenty of trips where he’ll do the Sacraments for me… he’s gone to funerals with me, he’s gone to hospitals with me… and for you guys, he’s always open to doing reconciliation.” Earsing added that he’s, “very Jesuit, which is really what I like about him. At the same time, you don’t expect a guy to be a vibrant as he is at 90. If you don’t know that he’s 90, you’d think he’s much younger.”

Mrs. Ines Mersch, assistant to the Principal and close friend of Fr. Edwards, believes that its important to have Father Edwards here because he carries, “wisdom that he has and the history that he carries with him… it’s invaluable to our community for the students to see him [and] for the staff members to see him.” Since Mrs. Mersch has started working at Jesuit, she’s noticed how “he never misses an opportunity to go for a walk with someone who needs to talk, to ask if there’s any prayers or things he can do for anyone. He’s always offering his extra time up as a priest and as a friend.” She also observed his solidarity with the Fruits of the Holy Spirit saying, “he just exudes all the Fruits of the Holy Spirit, which would be love, joy, peace, patience, kindness, generosity, faithfulness, self-control.” She also noted that “his humility in all of that… He is a beautiful example of what it means to be Christ to the world.”

On the 12th of November, I finally had the chance to sit down and interview Fr. John Edwards in celebration of 60 years in the priesthood and his 90th birthday. Born in 1924, it goes without saying that he’s experienced so much in his life ranging from the Great Depression to the invention of the iPad. The native Texan, having come to Jesuit about 6 years ago, additionally shared his story within the Jesuit Priesthood,  a journey that started his Senior year of high school at St. Joseph Central Catholic High School. From finding a brochure in the trash can that got him interested in entering the novitiate to being ordained Jesuit Provincial from 1965-1971, Fr. Edwards has seen so many changes within the priesthood as well as changes on the global stage.

In our full interview below, he tells his spellbinding story ranging from his very first memories, to Hurricane Katrina, and all the way to the AIDS pandemic and how he viewed them through an Ignatian lens.

It was an absolute blessing and privilege to speak with someone of such honor and charismatic personality such as our own Father Edwards.