More
JesuitRoundup.org is brought to you by:
Sports Wrestling Team Takes Down the Competition
Facebook
Twitter
Email
Print 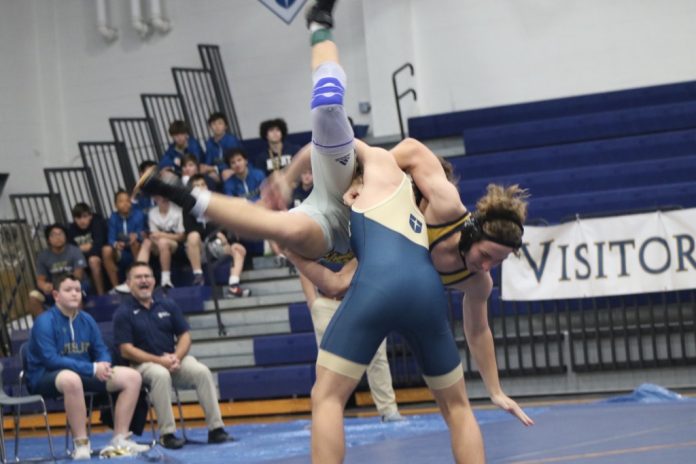 Heart pounding, knees shaking, and eyes darting around, the wrestler flawlessly sets up his shot and launches forward, taking his opponent to the mat in one swift action. As the match drew on, both wrestlers reached their breaking point but pushed on, surpassing what they thought physically possible. Finally, the Jesuit wrestler pins his opponent, and the referee blows the whistle, ending the six-minute sprint.

Wrestling is one of the most intense sports known to man, and so far, the Jesuit Wrestling season is on par with that reality. For months the team trained and conditioned to maximize their capacity for carnage. But it was not until the season began that the rubber met the road.

The Jesuit Rangers took on the Birdville wrestling team on November 11th at Jesuit; the dual ultimately resulted in a hard-fought victory. The night began with five back-to-back varsity wins. Sophomore Spencer Broussard acquired his pin with the crucial utilization of the Cement Mixer. The team nicknamed the move “The Matt Dietsch,” after Junior Matt Dietsch repeatedly pinned his opponents as he climbed to second place at an earlier tournament.

Later that night, Troy Menard claimed a pin as well, after taking down his opponent with a strenuous single-leg, then later shifting from a cradle to a Half-Nelson, squeezing the life out of his opponent. Similarly, junior Michael Geary began the match with a swift low-single immediately after the referee blew the whistle. Geary maintained control of his competitor throughout the three periods and later finished the battle in a pin through his use of “The Matt Dietsch.” Sophomore Dolen Hedrick effortlessly pinned his opponent within 18 seconds through his smooth application of a role. Every wrestler fought to the best of his abilities. Both winners and losers used the night as an opportunity to improve.

Only three days after their victory against Birdville, the Rangers were ready to take on over a dozen schools at the Richardson Round up, where Jesuit ultimately finished sixth. Former State contestant, Logan Mezger, finished in first, continuing an undefeated ten-match win streak. Similarly, Michael Geary took third at the 145 lb weight class with three pins throughout the day. At the 126 lb weight class, Alex Lizard took second place. Finally, sophomore Spencer Broussard took third place in the 120 lb weight class.

The Rangers began their Thanksgiving break on the grind as they decimated their competitors. Senior Andrew Wiechman returned from Football, at the 285 lb weight class, to pin every man he faced on Saturday. Logan Mezger continued his win streak with his pin against a Rockwall Heath student. This pin resulted from his proficient use of leg riding combined with an elegant Half-Nelson. Both Spencer Broussard and Nick Morris (yours truly) achieved a victory via pin against Berkner. Broussard won his battle in less than twenty seconds after using the infamous “Matt Dietsch.” Morris won his match after seven takedowns followed by a Half-Nelson. Chase brown pinned his Richardson opponent after he utilized a double-leg takedown. Alex Lizardi managed to win by decision with a 9-3 score.

Jesuit took on Richardson on December 1st in the Walsh Gym and walked away with a vigorous win. Jackson Chesney pinned his opponent with a classic Half-Nelson. Spencer Broussard integrated his now perfected “Matt Dietsch” and pinned his competitor. Broussard’s repetitive use of the “Matt Dietsch” has resulted in speculation about renaming the technique the “Spencer.”

Alex Lizardi used every ounce of energy to win his six-minute-long battle. “I gave everything I had and more,” he said when asked about the match. “I was throwing up for the rest of the dual,” he added, “but it was worth it.”

Troy Menard also used “Matt Dietsch” to sail to victory in his quick first-period fall. Nick Morris employed the blast-double to finish his pin. Finally, Senior Andrew Weichman continued his win streak that night. Weichman reached the fall after he sprawled on his opponent, then put him on his back in an inescapable Half-Nelson.

At the Highland Park duals, the team faced some of the hardest competition of the year. But that didn’t stop Andrew Weichman and Troy Menard both coming out victorious.

While the team is off to a great start, there is always room for improvement. The team is focused on reducing errors in basic techniques and trying to minimize being pinned. But the team has learned a lot. As Junior Jackson Chesney put it, “while the learning curve is hard, the victory makes the pain worth it.”

With one of the largest teams in years, the wrestling team has significant potential not only this year but also in the coming years. But to reach that realm of success, the athletes are going to have to work harder every day.