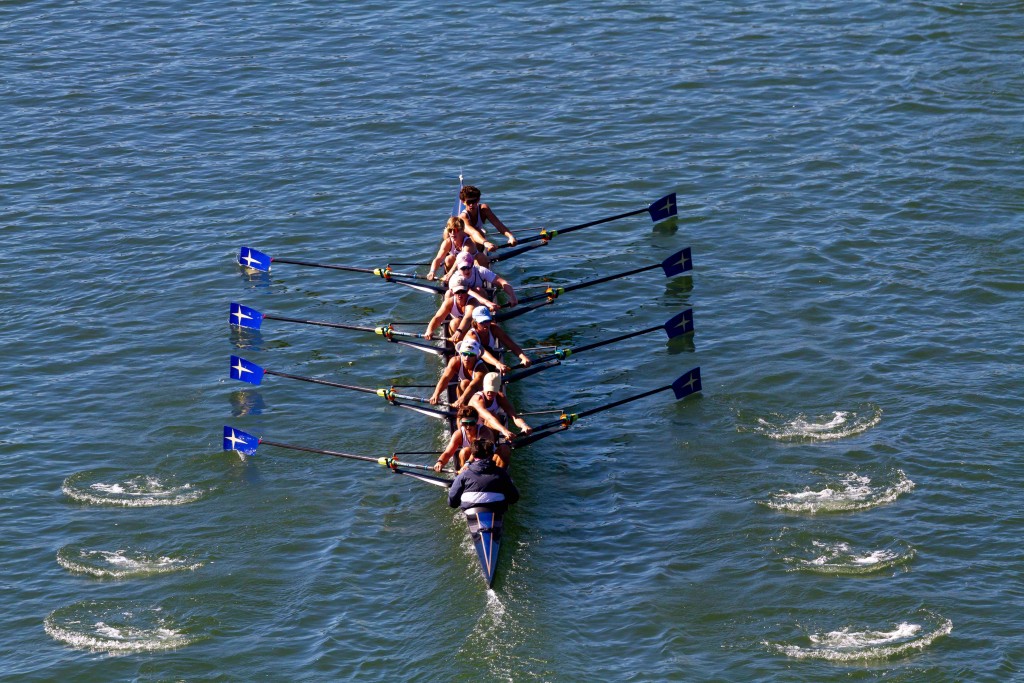 Jesuit Dallas, Chicago Rowing Foundation, Dallas United, White Rock: attention, GO! The blast of the megaphone calls the rowers to pry the oar towards their chests. For the next 1000 meters, everyone in the field will be in agonizing pain. Such is the sport of rowing.

On November 20th, both the Jesuit Crew Freshman and Varsity rowing teams competed in the White Rock Invitational, an annual regatta held at White Rock Lake in Dallas, Texas. This lake is also home to the boathouse that Jesuit uses for practice every day. 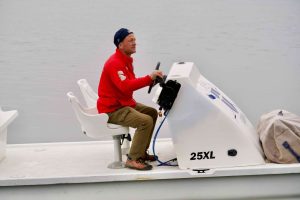 Freshmen:
The Jesuit freshman team (also known as the “frosh,”) started rowing late this fall with only a few weeks to prepare for their first race. Despite this late start, the freshman performed respectably. In their race, one boat had a mechanical issue, which caused the race officials to restart the race. By this point, the wind was picking up, which makes rowing much more difficult. The race restarted, and the rangers were ready. The Rangers did not falter. They raced to a strong finish against other promising teams in the field.

Varsity:
The Varsity 8+, composed of 6 seniors and 3 juniors, finished in 3rd place just behind Dallas United Crew and Chicago Rowing Foundation. The first race of the day was a heat race meaning that only the top 2 crews in the race advanced. Jesuit finished well ahead of the competition to secure a top 2 finish in order to move onto the final. Ultimately, the Rangers fell to Chicago and Dallas United to earn third place in the grand final. Though the result wasn’t what they wanted, the Jesuit rowers have set their sights on spring races, and are ready to race anyone. Coach Howell stated that “its better to be disappointed in the performance in the fall because you go into winter not thinking you’re already fast. You never want to lose, but its a nice thing when you go into the winter knowing you’ve got work to do.” 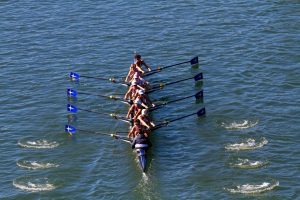 Flip Fest:
The idea of rowing is to stay in the boat and make it move fast, but it is important to stay prepared for the worst. On the water, flipping boats is an ever present danger, and it can pose a serious safety threat to anyone in the boat. Because of this, Coach Howell decided to hold the first ever Flip Fest for the Jesuit Crew team. The event was held in the Gull on Friday, December 17th. Every member of the team moved to the center of the pool in a 1x (also referred to as a “single”) to flip it, and then got back in. This gives rowers the confidence to handle a “flip” on the water. This year, the team has pivoted to use small boats) usually consisting of less than 4 rowers). Intended to help with rowing technique, small boats can easily be flipped, and after flipfest, everyone on the team will be able to get back in the boats. Senior Truman Mininger stated that “it was a necessary demonstration for safety reasons and concerns, but flipfest was also be a lot of fun.”

Winter training:
Over Winter Break, the rangers will be training differently than ever before. In years past, rowers have been expected to row nearly every day for extended periods of time. However, this year, the team has been encouraged to do the opposite. In fact, nobody is allowed to row more than two days in a row. Coach Howell’s philosophy is that rowers should be using the time to cross train by running, cycling, or swimming to gain fitness.

Stay tuned to see what the Crew team does next! With the fall season concluded, the rangers are ready for Spring racing…