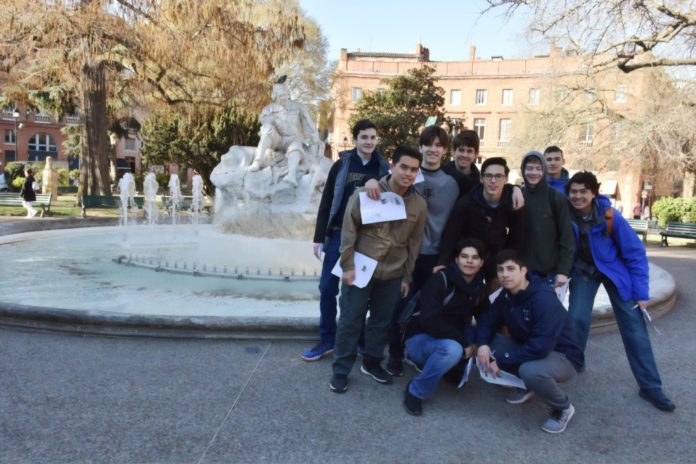 1:00 pm at DFW Airport on Saturday, March 9. Ten Jesuit Dallas Students, two faculty members, and one Traveling Sousa boarded a Boeing 777-200 bound to Paris, France. After one final goodbye to our families, American and French, the students walked past the iconic wishbone into the line for security, ready for our excellent adventure. Snacking on the quintessential Auntie Anne’s pretzel, we waited for the plane.

Once our group landed in Paris, France, we gathered our belongings and boarded a train to the city. After dropping off our bags in our rooms, the group took to the streets to begin visiting the town. After a day walking through markets and visiting Sainte-Chapelle, we took a stroll along the Seine and watched the Eiffel Tower from afar. We ended the day with all the students asleep in the lobby of the hotel, waiting for our room keys.

The next day, after enjoying breakfast in the hotel, we made the walk over to the Eiffel Tower. After, we went to Palais de Chaillot to see it in the light of the mid-morning sun. Shortly thereafter, our group moved to the metro and got on the train heading to the Louvre Museum. After seeing all the classics, we went outside to have lunch, crepes, and do a little shopping. To finish the day, we visited a modern art museum! We then ate dinner and returned to the hotel to rest for the next day.

After our usual morning routine, we began heading toward the place where St. Ignatius met with the companions in Paris. Now with Père Gilbert, a French priest, we went to Sacre-Cœur, an extraordinary church that sits atop a large hill. After walking around, we gathered outside the church and returned to where we began for mass. Next, we ate lunch in our usual manner and after some walking around, we went to the Arc de Triomphe. From the top of the grand structure, we watched the iconic Eiffel Tower light show.

The next morning, the group gathered for the last time in the lobby after a concluding breakfast, and we made our way to Monoprix. At the French Target-like store, we selected things for lunches that we would eat on the train. Upon arriving in Toulouse, our former exchange students and families greeted us. Each family took their host son to their homes for a much needed evening of rest.

The next morning, our French brothers gave us a tour of their school, La Caousou. Later, we traveled to the center of the town and saw the Hotel De Ville.

The next day, rather than spending the morning with our brothers, the American group went to Cité de L’espace, a space museum in Toulouse. That day marked the end of our first week in France.

We spent the weekend with our respective families, with activities varying from visiting the town center to rugby games.

Our American group reunited Monday morning at Le Caousou, then together we left to go visit some churches throughout the town of Albi. The next day followed in a similar fashion, some walking and sight-seeing in Toulouse.

The next day, the group engaged in a scavenger hunt through the streets of Toulouse which, unfortunately, ended early due to Mrs. Richard twisting her ankle. We used the rest of the day to shop for gifts for family and loved ones. Upon returning to the school, the group split to go home with their French brothers.

The next morning, along with the Slovenian students that had arrived a few days before, a group of over 75 people headed to Carcassonne, a medieval, fortified city about two hours from Toulouse. There we toured the castle and the small town that thrives between the walls with a population of 47 people. One of the townspeople who worked as a tour guide for visitors showed us around and taught us about the defense and history of the town and castle. 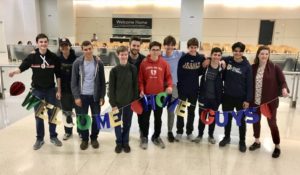 On our last day, we arrived promptly at 9:00 am at Toulouse airport. After one final goodbye to our French families, we headed to security and boarded a plane to London. There, after much rushing to make our short connection, we found our next flight bound for Dallas. At 7:00 pm Dallas time, we landed and returned to our families, greeted with smiles, cheers, long hugs, and banners!

Stay tuned to The Roundup for more Jesuit news!