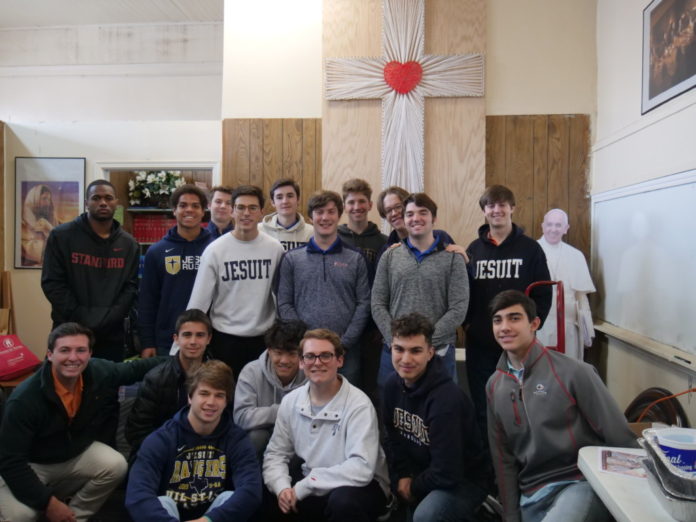 Borders represent several things to us. A border defines a nation’s geographic territory and sovereignty. It can create a sense of safety, security and belonging to a nation and its citizens. As citizens of the U.S., we all descended from immigrants at some point during our family history. But who lives in, and enjoys our nation, is the subject of much intense debate today. Should we be a more compassionate nation of open borders allowing anyone to enter? Or should we protect our borders and better regulate and control the influx of people who want to enter our country? These are complex ethical and political issues facing our country, especially in this incoming election year.

I recently attended Jesuit’s annual El Paso Border Immersion Trip.  This was a tremendous opportunity to experience very different perspectives of what life is like on the front line of  the US-Mexico border. Sixteen junior and senior Jesuit students, along with several faculty members, made the journey during five days in early February. Rich Perry, Director of Community Service and Social Justice, who has led numerous border trips commented, “Our experience provided a front-line opportunity for engagement with migrants, our Jesuit parish, service center volunteers, border patrol, and our partners in Mexico. Students witnessed the gravity of the current situation and appreciated the rich culture of the region and the personal challenge of those who are migrating.”

Upon arriving in El Paso, we settled into Casa Encuentro our new living quarters for the next few days. That evening, we dined at Café Mayapan and were provided with an overview of our trip itinerary. It was a fast paced journey that gave us various glimpses at life on the border.

Fr. Rafael Garcia, who serves as Director of The Encuentro Project, arranged the majority of our trip’s itinerary and was a valuable tour guide and resource. The Encuentro Project works to build human, cultural bridges in this part of the US-Mexico border. “The Jesuit students approached the immersion experience with great openness of mind and heart. While interacting, they encountered each other, and reflected with very mature attitudes and with an open heart and mind. This gives great hope for our troubled, hurting world,” said Padre Rafael.

One of the trip highlights was a unique exchange with members of the Border Patrol. We spoke with Officer Antunez and other members of his team who shared stories of their mission and responsibilities. They have a monumental task that involves humanitarian aid and providing medical attention (instead of their original purpose of detaining). The primary consideration is given towards tending to children’s needs. Other roles involve searching and rescuing many migrants who get stranded in harsh, potentially life-threatening, conditions. Many turn themselves in to avoid death in the desert. Their job is compounded by migrant population constraints as facilities aren’t designed for holding people for prolonged periods of time; only for processing. After our meeting, we visited a section of The Wall, which made a stark contrast separating two very different worlds.

Members of the Border Patrol address Jesuit students and share their experience including a first hand account of the challenges of their job.

Another interesting portion of our trip involved a visit to El Paso’s “sister city,” Juarez, Mexico. We strolled across the Paso Del Norte bridge, presented our passports, and were quickly processed through by Mexican Immigration Officials. We saw a stark contrast to the modern city of El Paso depicted by the infrastructure’s condition. We were amazed that we were only a few hundred yards away from such a modern, more affluent city by comparison. We found the Mexican people very friendly and hospitable. We attended a Catholic Mass conducted in Spanish, then met with Sister Gonzoles, who shared an authentic view and her daily experiences. She discussed the Remain in Mexico program, the recent influx of migrants from Central and South America, who are fleeing economic hardships in their country, among other related topics. She helped provide an added depth of understanding for the hardships our neighbors to the south encounter. We then shared a very enjoyable lunch at “La Nueva Central” and feasted on many different traditional Mexican dishes.

I had the privilege of interviewing El Paso Mayor, Dee Margo, to learn more about his role as leader of a city that is directly impacted by complex border issues:

As Mayor, how do you balance the needs of migrants entering into the US versus the need to maintain security, as well as essential services for El Paso?

“In 2019 we had 175,000 migrants come through El Paso. Our arrangement with Customs 7 Border Patrol (CBP) was a 24 hour notice of numbers to be released. We worked with our primary NGO, the Annunciation House, to transport migrants if CBP could not and assisted with their shelter and helped coordinate volunteers with the United Way. Migrants were only in El Paso 24-48 hours if their ‘sponsors’ were contacted to provide bus or air transportation throughout the US. If medical emergency, our EMS transported to a local hospital.  We have no security issues as migrants moved on. We have not had a significant influx since last July. The Remain in Mexico Protocol, until overturned, was working. Our main bridge closed overnight Friday due to Cubans charging bridge. Nothing since.”

How important are El Paso’s ties to its sister city, Juarez, and how do you see that relationship evolving in the future? What are the main challenges and opportunities with the relationship?

“We have a close relationship with Juarez and have been one region for over 350 years (1659).  Family on both sides, commerce on both sides, culture on both sides. We were here 100 years before the US was founded.  I have a formal Sister Cities arrangement with Juarez and do joint events with Juarez Mayor Cabeda. My wife Adair conducts monthly tours.  Challenges are proper bridge staffing by CBP. On a daily basis we have 35,000 private passenger vehicles coming north each day with 22,000 pedestrians and 4,000 container cargo trucks.  During height of immigration crisis when personnel moved from bridges to border, wait times were 2-4 hours for private passenger vehicles, 2 hours for pedestrians and up to 11 hours for cargo.  UTEP has 1000 students crossing from Juarez daily.”

How has the recent increase in immigration in the past decade impacted the overall demographic and economic climate of El Paso?

“No major changes other than bridge times.  Immigrants don’t stay in El Paso.”

What are your thoughts on the “Remain in Mexico Program,” and how has it impacted the city? Has it helped or hindered El Paso?

“Temporary fix, now overturned.  Root cause of our problems is the lack of intestinal fortitude for over 30 years by both Houses of Congress and both Parties to deal with immigration reform.”

Do you have any significant proposals to make regarding immigration, such as changing the process?

“Homeland Security defines Border security and Congress provides resources, not a political regarding a ‘wall.’ Thus, here are my suggestions:

What is your opinion regarding sanctuary cities? Are they beneficial to the United States as a whole?

“[They are] illegal [and] simply complicate the problem—deal with root cause .”

Note: A special thanks to Mayor Margo for his contribution to this article.

We returned to Jesuit more knowledgeable about the very challenging environment of the border and filled with a deeper appreciation for the struggles of those less fortunate. Many of which are seeking a better life yet Cwho often face widespread indifference.  Pope Francis calls these “moments of authentic encounter. The fruits of these encounters will only be revealed over time, in our actions and in our hearts”.