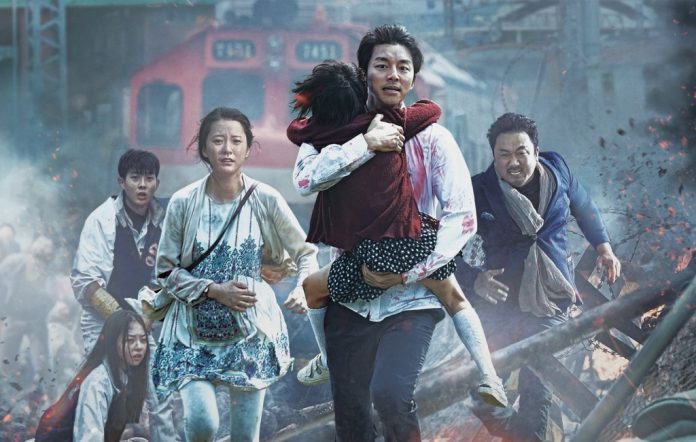 With popular movies, games, and shows like Army of the Dead, Resident Evil, or The Walking Dead there is currently no shortage of zombie media in 2021. With such an over saturation, it is hard for a zombie film to be fresh and novel. This is where Train to Busan comes in and adds a fresh look on the zombie formula.

The film follows Seok-Woo (Gong Yoo) and his daughter Soo-An (Kim Soo-Ahn) as they take a train to Busan to meet the daughter’s mother. On the train, they encounter a young athlete (Wook sik-Choi) and his cheerleader friend (Sohee) as well as a couple with the pregnant Seong-kyeong (Yu-mi Jung) and her husband Sang-hwa (Ma Dong-seok). The train at the beginning of the zombie apocalypse and a zombie is aboard, so the characters are trapped.

Why is it so good.

The premise is a cross between Speed, 28 Days Later, and The Raid, and the film lives up to such lofty comparisons. The director, Sang-ho Yeon, does an excellent job at blending heart racing terror and exhilarating action. The setup involving Soo-An unknowingly walking towards the danger in front of her is quite heart pounding. The film also does some interesting things with the “what if (popular movie) was on a vehicle” subgenre. In films like the aforementioned Speed, the film loses some momentum when the characters leave the bus. Train to Busan does a pretty great job at making the film feel entirely on a train, and even the moments when the characters aren’t on the train, which is brief, the film remains incredibly tense.

An incredible example of the intensity Train to Busan has to offer comes from a scene where Seok-Woo, Sang-hwa, and Yong-guk must move through four cars full of zombies to save Soo-An and Seong-kyeong. The scene has the best horror, thrills, and it adds some welcome changes to the zombie mythos.

In between all of the extraordinarily executed suspense are genuine character beats and moments. Our lead Seok-Woo begins rather lackluster. He seems somewhat selfish and lacks a willingness to help others. However, as the film progresses, he shows change and a willingness to help people other than just his daughter.

My personal favorite character, Sang-hwa shows some heart to those who weren’t as kind to him. In an early scene, Seong-kyeong and Sang-hwa are escaping a hoard of zombies, and Seok-Woo closes the door on them after the mob of passengers convinces him. Sang-hwa becomes understandably furious, but the characters put aside their differences. Sang-hwa begins to act as Seok-Woo’s moral guide, influencing the protagonist to become a better person.

I also have to give props to young actress Kim Soo-Ahn and her performance. She’s such a talent and can cry like no other.

The film also contains villains. Yon-suk (Eui-sung Kim) may just be the most infuriating villain in a horror film. The actor incredibly displays the worst of human nature.

Human nature is an important component to Train to Busan. It isn’t new for a zombie film to have the whole “the monsters aren’t the zombies but the passengers” shtick, but it resonates much more here. I’ll only give a very MINOR SPOILER here, but there’s a scene where a majority of the passengers gain a mob mentality, screaming and thrashing out. The audio of the nearby zombies goes almost entirely quiet, and the audience only hears the ravenous and savage passengers, making for an emotional gut punch of a scene.

The only problems I have with the picture stems from somewhat predictable moments. The film is mostly subversive, but the parts that aren’t subversive can be seen fairly far away. These moments are not emotionally distant, but they are predictable. Also the vfx can be quite jarring at times.

Despite some very minor issues, Train to Busan is an incredible action horror film. I can’t recommend it enough, especially as a gateway for South Korean cinema. It’s easy to watch too because it’s available on both Amazon Prime and Hulu. While the film is not perfect, it’s also one of the few genre films I’ve seen in recent memory to give me such a heartfelt experience, and I give Train to Busan a 5/5.