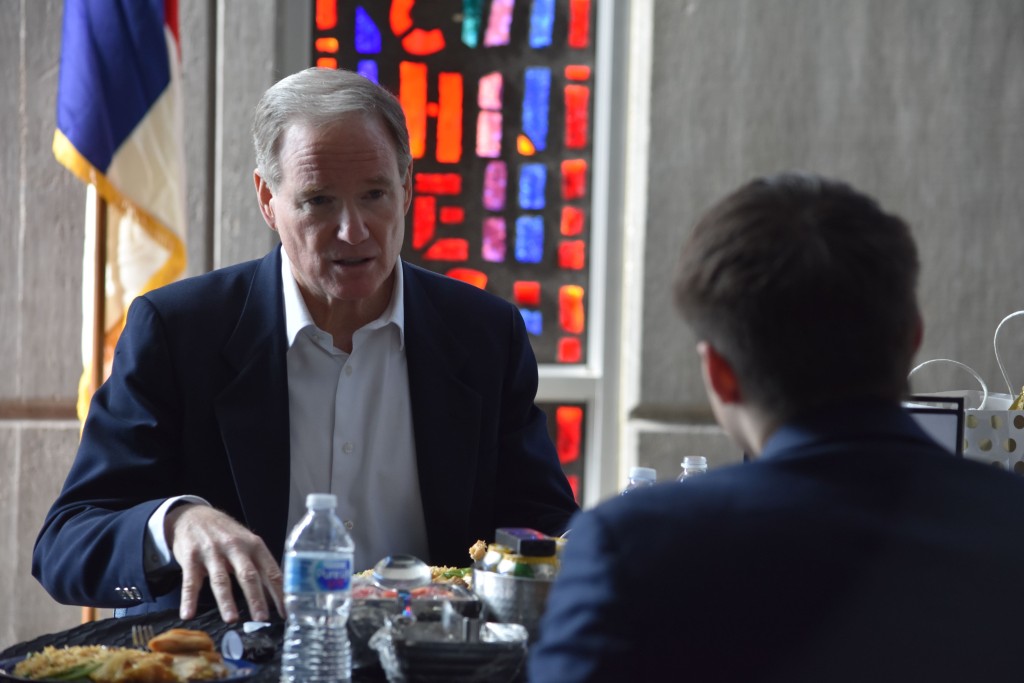 In part two, Joseph Guidone ’23 and I asked Admiral Walsh about the topic at the forefront of everyone’s mind: The vile Russian invasion of Ukraine and the unnecessary suffering which has followed.

You described Vladimir Putin as a “repugnant, reprehensible criminal” who sparked an “irrational moment in Russia’s history.” How do you believe Putin’s irrationality may interfere with peace talks or escalate tensions more?

“Well I think everybody sees right through the Russian strategy of escalating to deescalate. I’m increasingly concerned that there’s going to be a real decimation of Russia’s attrition capabilities, and this is not something that many were expecting. If you look at the loss of Russian forces, especially at the senior officer level, quite a few generals have been killed, their naval flagship was sunk, and I can’t tell you the number of tanks that have been blown up.

Considering how much Western technology and armament is going to beef up the Ukrainian forces, I believe we’ll see a real reversal that no one’s anticipating. That doesn’t bode well for Putin being able to negotiate his way out of this, so the longer this lasts, the harder it is for Putin to negotiate because he becomes backed into a corner. At that point all he can do is outmaneuver by escalating with worsening capability, which then takes him to the nuclear threshold.

If he actually uses a nuclear or biological weapon, causing an EMP sort of strike in the atmosphere or poisoning the ground to cause genocide-like damage, I think that would trigger European forces to start coming to the defense of Ukraine.”

As expected in any armed conflict, confirmed war crimes, predominantly by the Russians, are being reported by both sides. In addition, President Zelenskyy nationalized Ukraine’s media, effectively taking away private media, and banned political parties he deemed a threat to Ukraine’s national security. Do you see a potential danger when people characterize this conflict as a good versus evil type war?

“I don’t think war really comes down to good versus evil – that’s just too simplistic. We learned a lot from our own civil war; look at the actions that Lincoln took in order to preserve the union. It’s pretty extraordinary in how he too had to control the population because he couldn’t allow that “freedom of speech” at a time where the whole country’s future was threatened. It’s a very compromised position democracies end up with, but that’s the challenge when a system designed to be an overt and free society is vulnerable.”

Do you think rallying behind Ukraine can be turned into a political weapon to gain voters in countries like the United States?

“There will always be those who have an agenda – we saw this in the Gulf war. Just as a brief review, in 1991, after the U.S. led coalition forcefully pushed Iraqi forces out of Kuwait, there were many in the administration that were dissatisfied that we stopped the war, only restoring borders prior to the conflict.

When we ceased hostilities, there were many who said, ‘it’s time to go get Saddam’ (president of Iraq at the time), but getting Saddam wasn’t the factor which pulled the U.S. coalition together in the first place; what pulled the coalition together was Iraq occupying Kuwait and ignoring international opinion or sanctions. We didn’t allow for those with agendas to be more aggressive and go into downtown Baghdad (Iraqi capital) – we resisted that call.

If international intervention occurs in Ukraine, our response needs to be very similar: it’s a matter of restoring the integrity and the territory of a sovereign nation. Once that’s done, then it’s over. There will be those with their own agenda, but to go beyond that, in terms of political goals, would be a mistake.”

The current administration has given $1.3 billion in aid to Ukraine and is currently asking Congress for a $33 billion war chest to aid Ukraine. How do you think this monetary and equipment aid will assist Ukraine in contrast to the more conventional troop deployment which we saw throughout the Cold War?

“We’ve done this before in terms of arming countries that turn out to be proxies.

For example, we armed Afghanistan around 1978, and it resulted in a lot of losses that the Soviet Union couldn’t tolerate. The thinking is similar in Ukraine, that we do this through technology and armament.

That technology has proven to be quite effective at this point, and what journalists and Ukrainians are discovering, as they look at the carcasses of these Russian vehicles and the overall material condition of Russian equipment, is that Russia isn’t in good shape or technologically sound.”

Considering that Ukrainians can’t use American war vehicles due to a lack of training, how can we provided them air, naval, and ground support without getting directly involved?

“The best way to get around the training requirement is to give them equipment that they’re familiar with. So that’s part of the trades that have gone on between the U.S. And Poland, for example.

Poland had Russian equipment, and to convey that over to the Ukrainian side gives them an increasing capability right away; it’s capability that they’ve flown, its platforms they know. The rationale is that the U.S. will have more time to train the Western European forces with our equipment, and these exchanges will solidify the relationship between those border countries – like Ukraine – and the United States.

Ukrainians have been able to intercept Russian radio communications very easily. How much do you think this is going to alter the war?

“What’s interesting about this is that it’s effectively outsourcing cyber-warfare to anyone that wants to come in. It’s not just Ukrainian forces that are in a cyber fight – these are hackers from around the world that are supporting Ukraine in a way Russia just never expected.

Of course, I have no inside information, but I do think cyber-warfare is more of the future.”

How much do you think social media has influenced our perception of the war and politicians’ policies regarding the war?

“Everybody’s got a camera, so now we have access in ways that you couldn’t get in the past because you had to have journalists on the ground. We’re seeing posts highlighting the egregious nature of what’s going on, and that inflames the passions of people who are watching.

This has an impact on people that now put pressure on the U.S. Congress to pass the Ukraine aid package quickly, and I think all of that serves to heighten awareness about what’s actually taking place in the war.”

How will people seeing what’s actually happening rather than getting it from a news source change public opinion?

“If you were to go back and look at the Vietnam war, one of the turning points for U.S. public opinion happened after a report given by Walter Cronkite who’d been on the ground and had been a trusted figure in the American media.

When he said this war can’t be won, public opinions started to sway; now we have Walter Cronkites everywhere – everyone’s now got the ability to bring you to the front line.

You can see from the perspective of the refugees that are filing across the border, you can see families that are stuck in basements, you can see churches where innocent people were hiding and then subsequently were destroyed and killed.

Social media has completely undermined the Russian narrative that they’re there to protect the people of Ukraine from Nazis. It’s laughable, if it weren’t so deadly serious, how the Russians can continue to put this narrative out because no one believes it.

And when a former comedian, now president, publicly stands up and defends his country through all of these attacks, doesn’t leave, doesn’t hide, but stays, that empowers him in ways that I don’t think even he imagined.”

This brings to an end the interview with Admiral Walsh. His experiences throughout his years of service, exploring the sides of global politics and militaristic operations, alongside his work in the private sector, working closely on cybersecurity, has sculpted his opinion into a vital resource for understanding the occurrences around us.

Special thanks to Admiral Walsh and everyone else who facilitated this interview.

Tune into The Roundup for more global news coverage!