More
JesuitRoundup.org is brought to you by:
Home Arts Visual Arts The Story Behind the Paper

A pencil. A paint brush. A blank sheet of paper. And paints. Separately, each of these objects, is plain, one dimensional, empty, and devoid of purpose. Yet in the hands of a master artist, these disparate items come to life, unified into one story told in color, shape, and line. A story that reaches beyond the page and pulls the viewer into a world of its creator’s creation.

This spring, Mr. Joe Howard challenged his students to utilize their creativity and ingenuity to transform mundane art supplies into captivating and enthralling stories. Displayed in the Spring Art Showcase Stories, these artistic narratives captivated the Jesuit community so completely that some artists, like Connor O’Neill ’17, have “had teachers ask to buy one of [their] pieces.” However, these showcased masterpieces began not as magnificent and enthralling paintings, but as simple, humble sketches and rough drafts; that’s how Mr. Howard wants his students to create.

First, Howard begins the story telling process by “making [his students] draw thumbnails,“ or—in layman’s terms–a rough sketch that plans out the artistic piece. Howard encourages his artists to create several drafts, pushing for a more creative and intricate design with each thumbnail.

Hundreds of lines and a hundred more erase marks later, the student has finally reached their final design, a complex image filled with symbolism and significance that tell a story from the artist’s perspective. One artist,  O’Neill, discovered the story he wanted to tell after making his final thumbnail. Then, he took pencil to a fresh sheet of thick, white cardstock and began to draw.

Line after line, a sliver of pure white between each of them, O’Neill draws a head of fine hair. His work is very deliberate, unapologetic. Each movement of the pencil is calculated; each mark is planned and necessary to tell the story he wants to convey. He lifts the pencil from the page, and a roaring African Lion leaps out from the flat sheet of paper. Yet, O’Neill isn’t done. He likes to incorporate something “unexpected and bold” into all of his pieces. 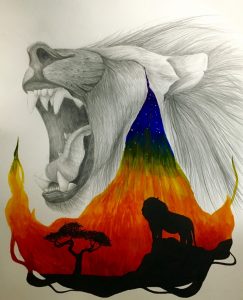 Mr. Howard urged his students to tell a story with their artwork, and O’Neill rose to the challenge. He swaps his pencil for a paintbrush, runs the brush hairs through a puddle of vibrant cerulean, and layers paint on the canvas–first blue, then yellow, then orange, then red–until the stream of tears morphs into a dramatic African savannah.

Standing in direct contrast to the graphite animal, Connor utilizes contrast and color to portray a narrative of regret and sorrow. Allowing the lion itself to fade into the background, he downplays the anger and ferocity normally associated with a lion and accentuate his gentility and emotion.

O’Neill and his fellow artists attempt to portray a message through their work. Finding inspiration in his everyday experience, O’Neill “portrays and criticizes certain societal themes through [his] work. [He] likes to take an ordinary subject and communicate his message through that,” highlighting an unexpected aspect and calling his audience to look beyond the norm.

Seagram’s captivating landscapes also earned him the Andrew Bark ’98 Memorial Scholarship at the Junior Convocation this past Thursday. This unique scholarship awards full tuition to one student per year based solely on their passion for the arts.

Each artist tells a story in their own way, and Howard pushes his students to utilize various techniques and methods, from typography to Adobe Photoshop. Yet, regardless of the artist or the tools they use, each piece not only tells a story about its creator’s past and their internal emotion, but it also provides a glimpse into a future filled with artistic success.