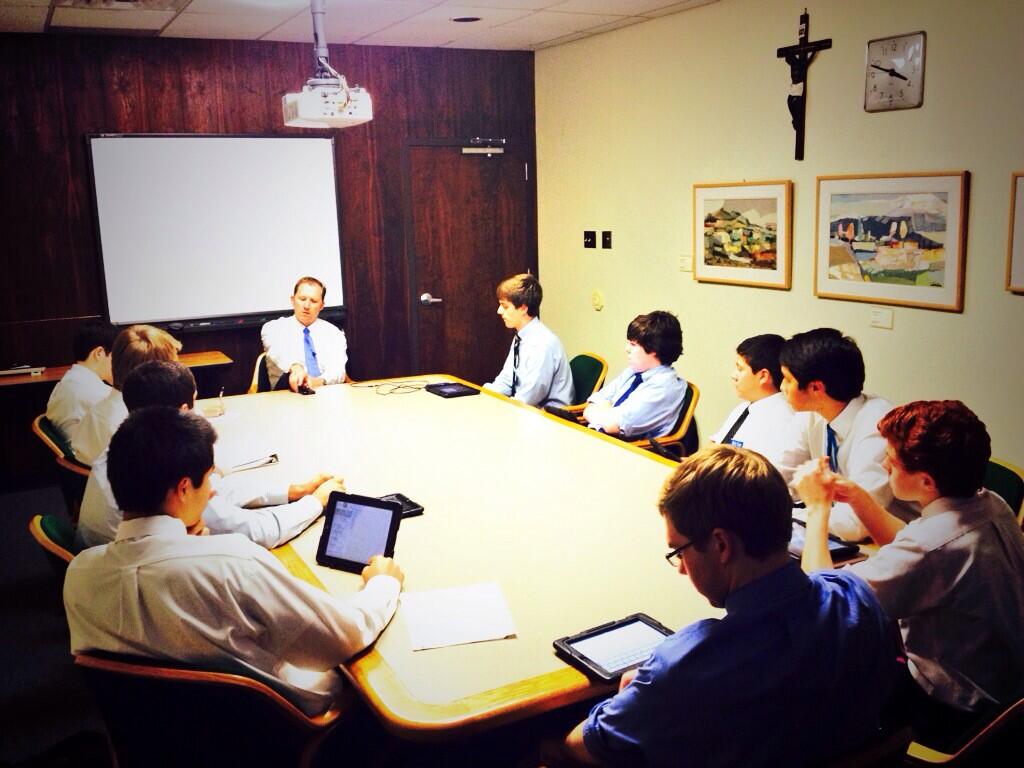 On Thursday, October 17, The Roundup conducted its first press conference of the year with Principal Tom Garrison. The staff covered various topics, ranging from school construction to the school year’s reflections. Mr. Garrison provided great information which many people may not be aware of. Below are a select few of the questions from Thursday’s conference.

Dylan Dotter ’14, Sports Editor: When was the decision to remodel the basketball gym made? What was the process like to make that decision?

Garrison: It was something that’s been in the works for a long time. Basically, once we were sure that we could pay for it, we decided to pull the trigger. If you go to the north-east corner of the gym, there’s a plaque that shows the gym was dedicated to Jim Walsh who was the basketball coach here for several years, so we wanted to make sure the timing would work with his family as well. Once the bleachers, flooring, windows, and colors were selected, we said go. In fact, the new cut-out above the home bleachers in the wall of the athletic tower was actually in the original idea when we built the athletic tower. Because the timing would’ve interfered with last year’s basketball season, we had to wait.

Dotter: Will the gym be completed by Ranger Day (Friday, Oct. 25)?

Garrison: Yes. The final date was supposed to be sometime this week, so we will definitely be in there for Ranger Day.

Justin Rubenstein ’14, Managing Editor: Are there any plans for any future construction projects?

Garrison: Nothing is set in stone right now. Mr. Earsing started a strategic planning process about 18 months ago, and we are currently finishing that up now, so the goal of that planning is to see what needs to be remodeled or built next, such as the theater, cafeteria, parking, field space, the prayer garden, the roof on the ’86 wing, and more. The roof is probably the next thing we will do over Christmas break.

Pierce Durham ’14, News Editor: Can you talk about the Magis [golf tournament] this year and how it went?

Garrison: It was wonderful! It rained cats and dogs, though. Someone said in an email that even though we had really rough weather, everyone played. I think about 400 golfers played even though it rained for 3 or 4 hours. Everyone was happy and had a great time. The fundraising was extremely successful. It was all very well-run and very organized.

Aaron Stonecipher ’14, Editor-in-Chief: We are now going into the third month of the school year. How do you think it has gone so far as a whole?

Garrison: It’s been really good. We’ve now seen Community Days for the seniors, the freshman retreat, several home football games, and they’ve all been good. I’ve been pleased with the behavior of students at these events.

Durham: Are there any plans to replace Fr. Wieck, SJ who will be leaving next semester to move to Australia, or will it be a group effort to take his responsibilities?

Garrison: We aren’t sure right now. We don’t know if the Jesuit province will send us another Jesuit at this time. He’s teaching a one-semester senior course, so we won’t have to replace that class. The idea is that he will return after he has completed [his time] in Australia, and we might even see him at the beginning of next school year.

Robert Brandao ’14: How do you think the new teachers are doing at Jesuit?

Garrison: I’m hearing great [feedback]. I think, depending on where the teacher came from, the biggest part of the new year is adapting expectations. Each school is different, so they have to figure out what the nuances are of being here.

Garrison: The thing about him is that he’s the perfect example of what we wanted. I’m sure you all remember Sandy Hook last year. It was awful; it was one of the worst days of my teaching career and it didn’t even have anything to do with me. There was a visceral reaction across the country that we need to arm schools and teachers and nobody is safe. A lot of schools went out and started hiring security companies. We think we have a very special culture here and it’s something we want to preserve. I think you guys feel like you have some freedom and trust here, and we didn’t want to bring someone in who doesn’t understand that freedom and trust, but who would still make us safer. The great thing about Officer Scoggins is that he used to be in charge of the security detail when I was a student. Whenever there were police officers at games, he was in charge of them. He’s known our community for years and years and years. His son is actually in charge of that now, so we really have two Officer Scoggins here. The officer you see here every day retired from the police force at the same time we were looking for an answer to this security question. We then said that he’s what we wanted. He knows us, he works well with you guys, and he makes this place feel safer. He knows when someone is stranger here. If you haven’t noticed, we also have police officers here every day from 4:00-7:00 after school just to be a presence here.

Rubenstein: What other additional security measures have been taken besides hiring Officer Scoggins?

Garrison: Well, we started doing lock-down drills. The faculty has started talking about security and protocols more. There are cameras in the school now to make record of something [if an incident occurred]. Parking security has increased, and it’s actually hard to get on to campus if you haven’t noticed. The guys outside do a good job with that. The administrators now carry around radios for communication, too. In addition, and this is still a few years off, we are talking about changing the front of the school and the entry way, so it’ll be easier [for us] to control access into the building.

Stonecipher: The senior statistics class just went on its trip to Utah a few weeks ago, and I know you served as a chaperone on that trip. How was that? (See article here)

Garrison: It was great! It was really cool. I give a lot of credit to Mrs. Mattacchione for that trip. She met a woman at a math convention and got the idea for this trip, and it wasn’t a long time, the cost was reasonable, and it was unique enough to be memorable and fun. I’m hoping we have more trips like that in the future. It was just fun, though. We were on a mountain top and between two mountain ranges, and it was fantastic. The sunsets and sunrises were just beautiful.

Stonecipher: Are any other trips being planned right now?

Garrison: Not yet. The other thing that Mrs. Mattacchione did, and I’m not sure if many people knew this, but she spent a year researching and working on this trip. She would write up a plan, bring it to us, see what we thought, then come back with revisions, and she didn’t give up. We then said, “Wow. This is going to work.” And then we did it.

Dotter: Having attended Jesuit and now serving as its principal, what does Ranger Day mean to you?

Garrison: I love Ranger Day. Ranger Day, on the surface level, is just crazy. It’s fun, there’s freedom, you guys get to play. You have a good time. I still remember building my chariot at my big brother’s house my freshman year in his garage. Our chariot was pretty slick; we painted it and everything, but we used a broom handle, and that’s what broke.  It’s all memories, though. I never remembered who won the events, but I remember it was just fun. That’s the stuff I hope you look back on as alumni and have good memories of.

Brandao: Was Ranger Day first intended to come before homecoming but now it’s moved on to become after?
Garrison: There’s also an alumni homecoming event, and the challenge is having the event and then also having the game, Ranger Day, and the dance. It was too much, so we decided to split everything up over two weekends. We don’t have the man power or the space to do everything on the same weekend. We also have 35 alumni working here and I want them to be able to participate in everything, but if all the events are on the same weekend, it’s impossible to do that.

Michael White ’15: I’ve heard that many Ursuline students say that they don’t know many Jesuit students, especially since homecoming is coming up. How would you describe Jesuit’s relationship with Ursuline?

Garrison: It’s hard to have mixers for students. We might start scheduling a mixer, but then Cistercian will say that they’re having theirs, so it’s hard to have one. We have one freshman mixer to allow the students to meet each other. I also look at the other opportunities for girls to meet guys. We have a freshman and JV and varsity football game every week. There’s always a game going on. If they want to meet you guys, have them go to a game! We always have guys at the plays, too, so go on out and see a play. Mr. Myers is doing a great job of incorporating girls from other schools into the plays, so I think that’s a great way for students to meet each other.

Stonecipher: Over the summer, the science department helped remodel the science labs to join the neighboring classrooms with the labs. Have you heard any feedback? (See article here)

Garrison: What I’ve heard is that it’s really nice to be able to do a lab on the fly. My understanding is that more labs are happening, which is great. However, I think it’s harder to take tests in those rooms since everyone is sitting pretty close, so if we remodel any more labs, we will probably take that into consideration. Most teachers like them, though.