More
JesuitRoundup.org is brought to you by:
Home News Clubs & Activities The Jesuit Tabletop Club 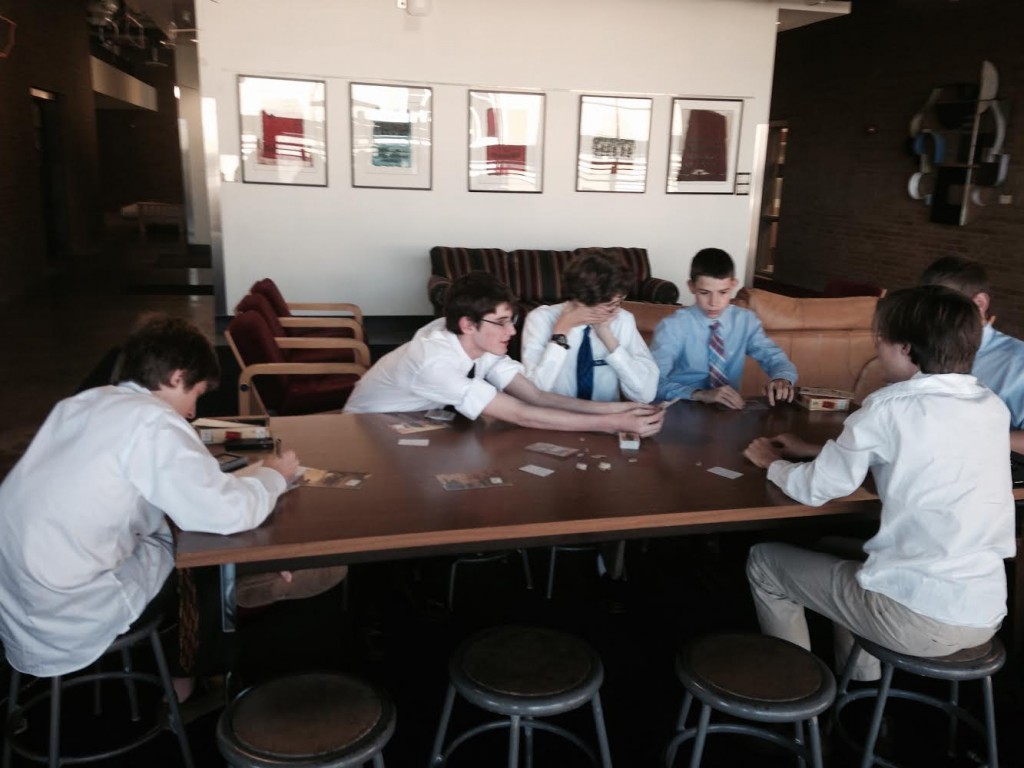 Tabletop games are not your traditional board games, such as checkers, Monopoly, and Candy Land; they include games such as Munchkin, Magic, War Hammer, and War Machine, which allow for more unique experiences, like painting your own figurine, adding more depth to the game itself. Jesuit’s new Tabletop Club allows for students who have an interest or desire to learn more about these types of games to gather and play with each other and the moderator, Mr. Harmon, who shares this interest.

Mr. Harmon, when asked about his interest in tabletop games, explained that “one of [his] hobbies is painting models for the games.” This interest led to him becoming the moderator of the club. “Some kids heard that I had an interest in [tabletop games],” he noted, “so they approached me to be the moderator and that’s kind of how I got into it.” Harmon also added that while “[he likes] to play X-Wing and War Machine, which are a little bit more involved,” the other guys in the group enjoy the more popular games like Munchkin and Bang.

When it comes to painting and customizing the figurines and characters, Harmon said, “It’s all different levels and that’s kind of the fun of the game. You can customize these individual models however you want.” He added, “When you go to a store and play a game of War Machine, it’s not like they will say, ‘Oh, that model looks like crap.’ If you’re putting anything into the model, you’re putting yourself into it. It’s got to be a pretty cool group of people that come together and can share an artistic value like that and also the competitive side [of the game]. It doesn’t take a lot to get into, just some paints and a tiny brush.”

The president of the club, Erick Huang ’17, is also the founder. After learning that the Magic club he wanted to join no longer existed, he decided “to start one [himself], but make it a bit more broad.” When describing the club, Huang said that “members come and go” and estimates that there are a little under 15 of them. “At meetings,” he explained, “we mostly sit around and play simple games; our collection is small and we don’t have much competitive play.”

Erick’s interest in tabletop games began “around mid November of last year.”  He started getting more into it when “a friend introduced [him] to Magic over the summer and [he] decided to go to a game store to play at an event. Upon entering and seeing all the games, [he] decided to start learning how to play all these cool looking games.”

Erick passionately exclaimed that he is “a huge fan of Magic: The Gathering,” but he has “thoroughly enjoyed playing Munchkin at the club meetings,” saying, “It’s probably the game [we] play most.” Erick also said that he doesn’t “play any war games with figurines, though we have a few members who do.” When asked who his favorite character is, he confessed that it’s probably Sticher Geralf from Magic.

The Tabletop Club is a great opportunity for kids of any grade level to express their interest in tabletop games. Considering the club does not play very competitively, it only makes it more inviting. Meetings for the club are Mondays and Thursdays until the end of football season, due to Mr. Harmon’s position as the football chaplain. After the season ends, though, meetings will move to Mondays and Fridays. If you have any question, intend to join the Tabletop Club, or want to learn more about what the club entails, contact Mr. Harmon or Erick Huang.