More
JesuitRoundup.org is brought to you by:
Home Profiles Alumni The Doctor Is In 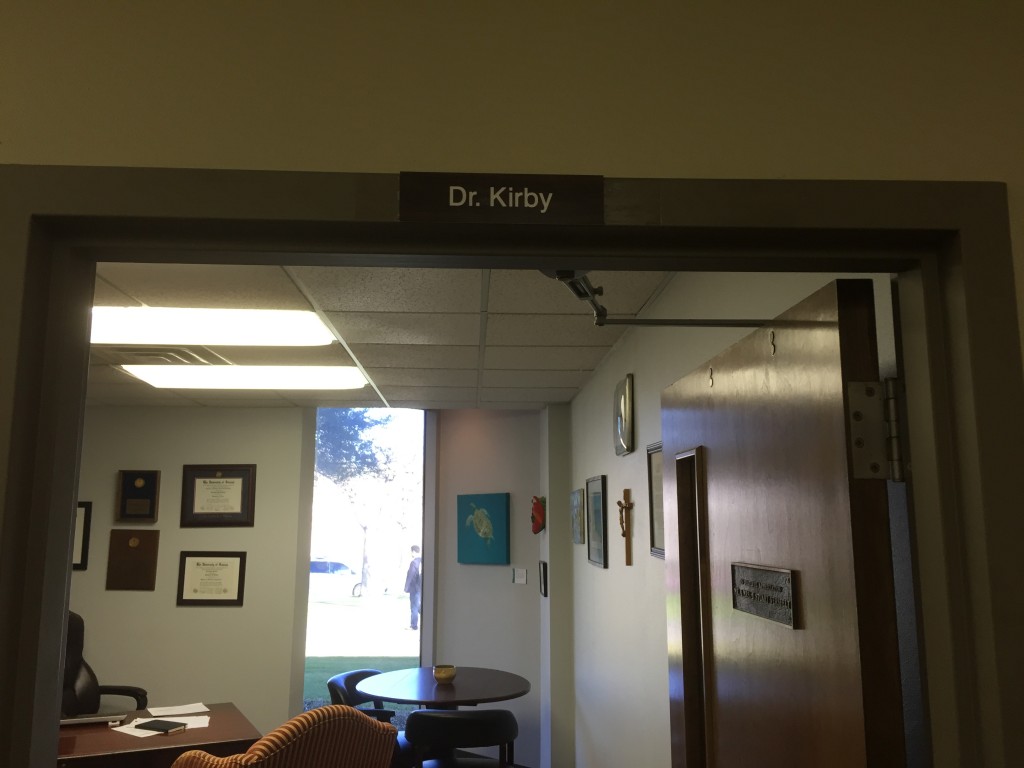 Pencil hits paper, and the faint scratch of lead on a desktop fills a packed, college lecture hall. One Pre-Med student furiously transcribes his professor’s lesson on Biology, preparing for an upcoming assessment. It is Mr. Ben Kirby’s final year of Undergraduate school, a checkpoint along the wearying road to becoming a doctor in the field of medicine.

However, nearly a decade later Kirby enters his office on a Monday morning, preparing for an eventful and hectic day at work. Yet, his office resides not within the walls of a hospital, but instead on the campus of Jesuit Dallas College Prep.

Diverging from his pursuit of medicine, during the second week of December, Kirby traded in his lab coat for a sport coat and his medical patients for nearly 1,100 high school students. After six years of grueling study at UNT, Mr. Ben Kirby adopted the prestigious prefix of “Dr.” after successfully defending his doctoral thesis: An Investigation of Pre-Service Teachers’ Understanding of Buoyancy. His motivation for such a drastic change of career was his overwhelming passion for education and leadership.

Kirby’s penchant for education began during college; moreover, he has always possessed innate leadership skills that flourished during his undergraduate studies at Kansas University. In fact, Kirby recognizes that his experiences with “student leadership, Greek life, and diversity” have strongly influenced his decision to pursue a degree in education. However, Kirby did not receive his degree in Curriculum and Instructional Education overnight. His current title results from over six years of grueling study at the University of North Texas. During this time, Kirby completed sixty credit hours, countless days of intense study and research, and over 200 pages of typed material.

Kirby noted that the “most challenging part” of this sea of notes, classes, and essays were “probably statistics.” Tasked with learning highly complex statistical mathematics that he would “most likely never use again,” Kirby was required to comprehend vastly complicated mathematics that outstripped the math utilized in his research. Along the way, Kirby turned to fellow education majors studying at UNT for “support.” During his study, he “collaborated with about 10-12 other [doctoral candidates,]” relying on them for support, guidance, and advice, three unexpected yet invaluable benefits that made Kirby’s success possible.

Although Kirby’s prefix has changed, he still possesses the same dedication and strong work ethic that have guided his studies since college. Dr. Todd Gruninger, a fellow Ph.D. that has known Kirby since his first year at Jesuit teased his friend about his doctoral studies, saying, “He’s always had a strong work ethic. He has always wanted a Ph. D. just because I had it.” Gruninger, however, went on to explain how he “gave [Kirby] moral support” during his exhausting studies. Gruninger also praised his colleague for his determination and perserverance, for Kirby has balanced his service as assistant principal, as well as countless other responsibilities, with his studies flawlessly.

Equipped with the highest level of education in Curriculum and Instruction, Kirby moves forward, continuing to shape and improve the daily operations of Jesuit College Prep. Although Dr. Kirby’s expertise in education holds unknown benefits for the future, one thing is certain: THE DOCTOR IS IN.