More
JesuitRoundup.org is brought to you by:
Home Featured Sudoku for Dummies – Level 4 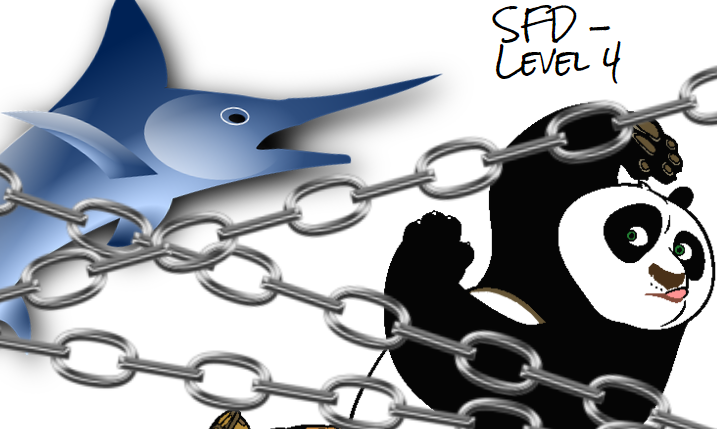 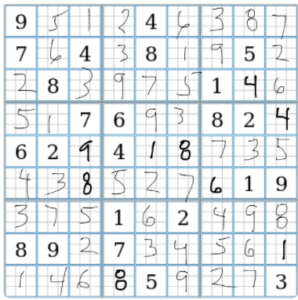 Congrats to Mr. Batik for completing Boss Level 3! Remember, you don’t have to be a student to participate! Or even affiliated with Jesuit! If you have any questions about the solution, you can email him at mbatik@jcpstudents.org

Now – the moment you’ve all been waiting for. The lesson of all lessons – The level of all levels – Level 4

It is time to become the Dragon Warrior…

Side note: Kung Fu Panda is literally my favorite movie… I’m such a child…

Another side note: I really wish I discovered I could add gifs sooner.

If you don’t understand 3.2 yet, now is an excellent time to learn. This is basically an extension of 3.2. 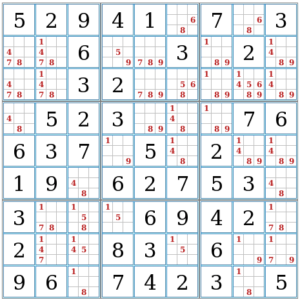 As you can see there are exactly 3, and they all line up.

If this isn’t sounding familiar here is the link to the X-Wing again. 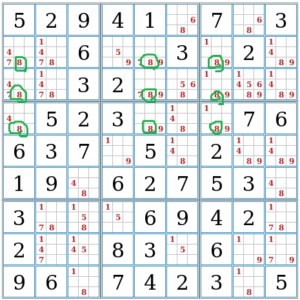 Let’s go through some quick hypothetical cases again. Let’s just pick a random 8 in the first column. So I’m going to put an 8 in column one row two. As you might have noticed, an X-Wing has formed. In fact, no matter which 8 I pick, it makes an X-Wing.

That’s why it was important to learn the X-Wing first. I tried to learn this first and it took a really long time… 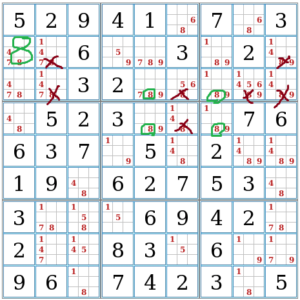 So there is the hypothetical case. There will be Xs in the places I marked no matter which 8 I pick in column one. I usually do pictures for all of the cases but no one actually reads the lessons… You can work through the cases in your head, but those red Xs always apply.

Swordfishes like this, where the candidates are exactly 3 x 3 are pretty rare. The cool thing is it doesn’t have to be 3 x 3. 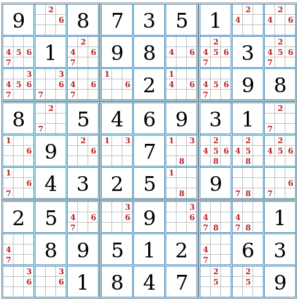 Look at the 6s in rows one, six, and nine. There aren’t three sixes in any of the rows – there are only two (if  there were only one you wouldn’t need this trick). But they still line up.

Even with some candidates missing, it still works as a swordfish. 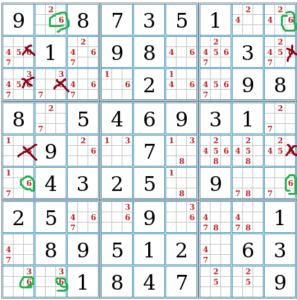 In this case, it’s easy to run through the cases. If the bottom left corner has a 6, then row six only has one 6 candidate (in column nine). So a 6 must be there, and now there is only one candidate in row one (in column 2).

If you start instead by assuming row nine column two has a 6, you can run through similar cases to find where the other 6s would be. Either way, the Xs apply.

This one, the finned swordfish, is basically 3.3, so make sure you understand that first. 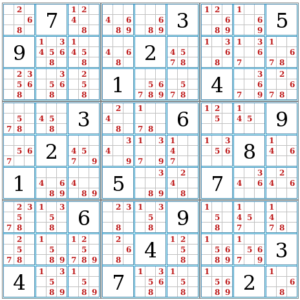 Let’s take a look at the 3s my dudes.

Rows two six and nine to be more specific.

Did you spot anything that was almost a swordfish? 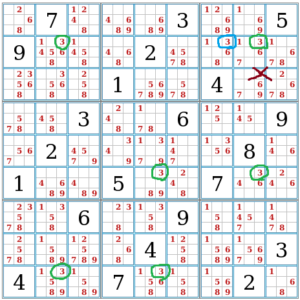 In green I marked the swordfish. The blue guy is an annoying obstacle that’s in the way.

Let’s ignore the blue one for a second. If the blue guy wasn’t there, we’d have a swordfish. That means no 3s could be in columns two, five, or eight other than the green ones. If that doesn’t make sense, check out 4.1.

But we still have the 3 in the blue circle. Well if the 3 is there, then there can’t be another 3 in that box, row, or column.

So both ways eliminate a single common candidate, marked by the red X.

This is the last super important lesson I have. It’s fairly easy to understand, but super hard to find and actually use. Every Dallas Morning News Sudoku I do (level five outlined stars) uses this trick at least once. It’s a real pain…

Let’s get started with chains!

Basically just guess and check… Plug and chug… Seems rather primitive but that’s how it’s done! 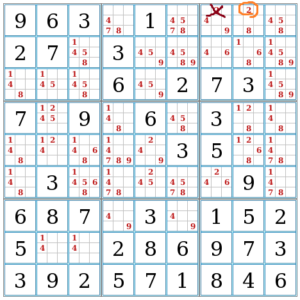 Let’s just pretend that a 2 is supposed to be where I circled in orange.

The two with the red X obviously can’t be there because it’s in the same box. 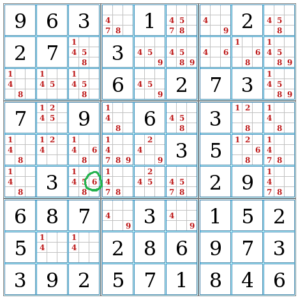 There is only one 6 left in the row, so it has to go there. 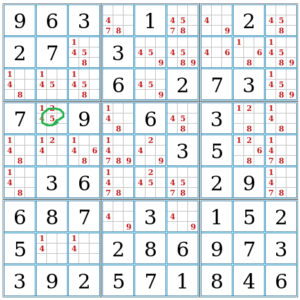 That leaves one 5 left in the box so it has to go there. 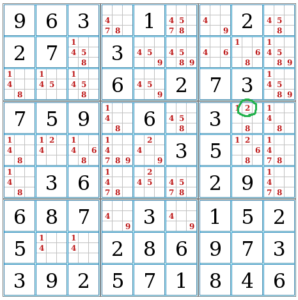 Only one 2 remains in the row so it has to go there.

But wait! There’s already a 2 in that column… That means there can’t be a 2 in the column in the first place.

You can also go through different hypothetical cases with chains and if both scenarios exclude one candidate, then the candidate may be obliterated, vaporized, or simply erased depending on your personal preference.

That’s how chains work folks. I was looking into them online and they get way more complicated… It takes real dedication to learn all this stuff… 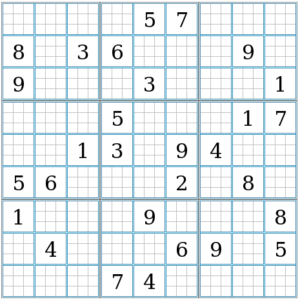 This is as hard as the Dallas Morning News gets.

I solved it and it was pretty tough, but all the computers are saying it was easy…  Sometimes I overlook the obvious. But maybe the lesson I used is considered easy to computers.

So maybe this shouldn’t be a level 4? Let me know what you think! 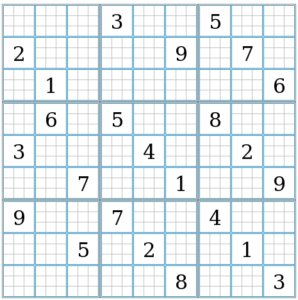 Once you get past the beginning it’s pretty straightforward.

If you’re having trouble, check out the lessons above. 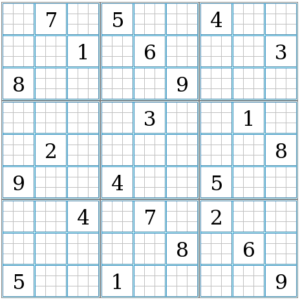 Almost certainly more difficult. Patience is key! Along with the lessons from your favorite Sudoku articles (these of course). 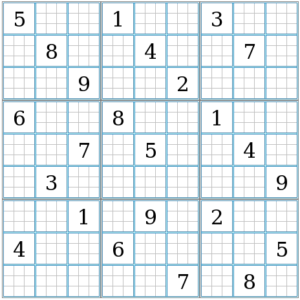 Here’s another toughie for ya!

I decided to make Level 4 double the fun. But there’s no school next week so my next post will be in two weeks. (The double fun has to last twice as long, hence the four boss levels… 2 x 2 = 4…)

In case you didn’t have any Spring Break plans, now you do!

First one to send me a solution (19370@jcpstudents.org) will be featured in the final episode!

Happy Sudoku-ing, and see you later on The Roundup!