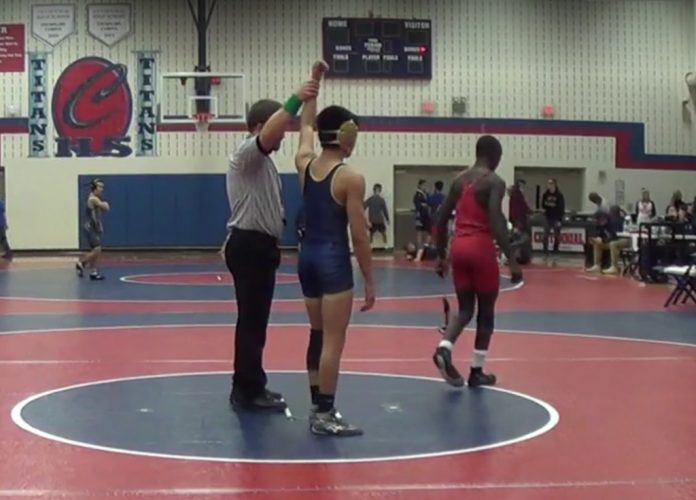 It’s midway through the Jesuit Rangers Wrestling Season, and the competition is beginning to stiffen. Practice, compete, repeat is the methodical mindset of almost every athlete, but what sets these wrestlers apart is, as Head Wrestling Coach Ryan Menard has emphasized, their focus on setting attainable goals in order to measure success. Let’s take a look at some the more recent Ranger successes:

Spencer Buchholz ’20 (138-pound weight class) and Trip Hatton ’19 (126-pound) secured 1st place in their respective classes, each sweeping the tournament with a pin against all of their opponents. Liam Leahy ’20 took home the 120-pound title, triumphing in a finals match that lasted only 2 minutes.

Noah Wrinkle ’20 (145-pound) competed in his first tournament of the season, finishing 4th. 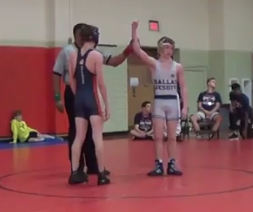 In the 160-pound class, Sean Maguire ’18 finished third, and Eugene Watkins ’19 finished second after after a tough finals match.

“I really enjoyed watching our younger guys compete and get some wins,” Grayson Godfrey ’18 commented, “I think that it’s promising to see them place at tournaments in their first year of wrestling.”

On Saturday, December 3 the Varsity wrestlers travelled to Lake Highlands to build on the success of the JV the previous evening. Derek Dumbrigue ’18 pinned his way to a 2nd place finish in the 113-pound bracket. Godfrey (152-pound) and Grayson Buchholz ’17 (145-pound) secured victories by pins in their respective brackets, finishing the tournament with a win each.

“I thought that the team had a great tournament,” Grayson Buchholz explained, “while there is always room for improvement at every level, I thought everyone did a great job and gave a lot of effort.”

The Ranger Wrestlers headed over to Richardson Berkner High School on Wednesday, December 7 to take on the Rams in their fourth duel of the season.

Maguire started the JV team off strong, securing a pin in the first period. After a series of tough matches and close calls, Watkins breathed life into the JV’s

campaign with a pin in the first period. Answering this victory, the JV squad closed out the Rams by winning the last two JV matches, including pins by Spencer Buchholz and Leahy.

Leading off the varsity matches, Gabe Farrell ’19 pinned his opponent in the final period. Following his teammate’s victory, Dumbrigue dominated his opponent, taking a 14-point lead (17-3) into the third period before pinning him.

“If we keep working hard like we have been,” Farrell explained, “then the team looks to be in great shape at the beginning of the toughest, most grueling part of the season.”

Leahy dominated his competitors in the first two rounds of the 120-pound tournament, pinning both opponents to land a spot in the finals. From there, Leahy fought a close battle with Liberty Christian’s Jacob Taylor that went into overtime, where he finished Taylor off with a takedown, securing 1st place with an 8-6 victory. 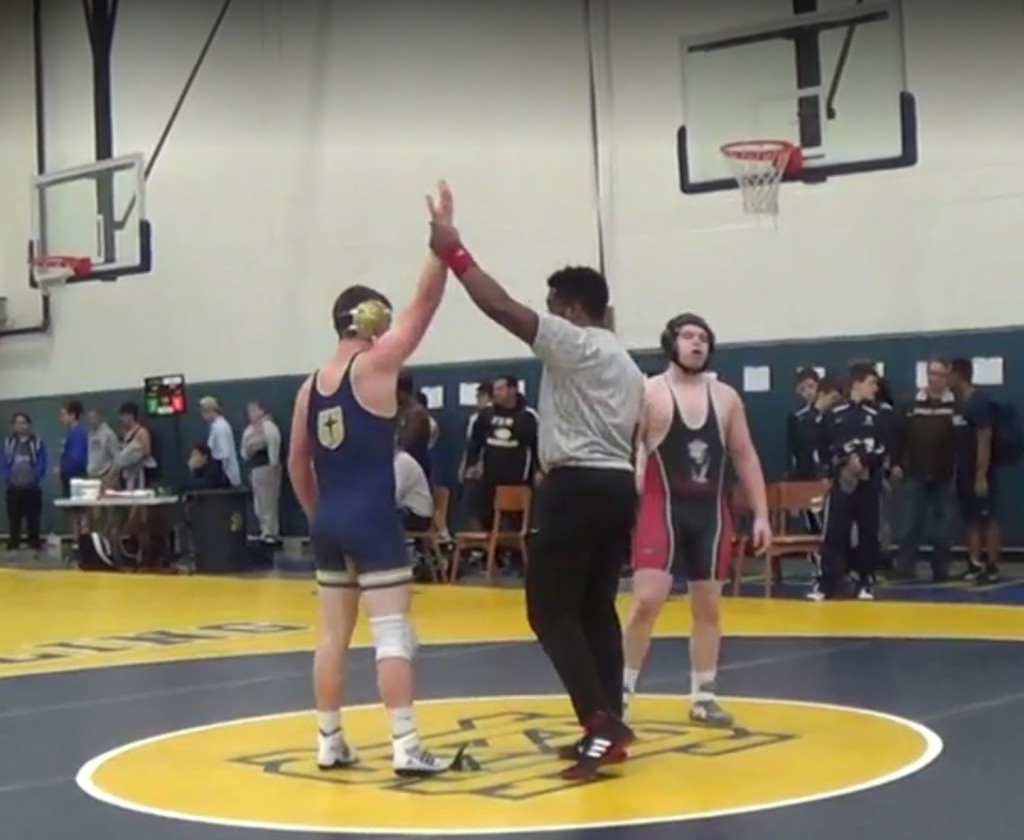 Hatton started his 126-pound run with a pin in the first period over Ephriam Lowe from Brewer. After a tough loss to Charles Goss from Rockwall High School (who finished second), Hatton fought back to a third place finish, beating Brandon McChristian from Rockwall and then pinning Wyatt Ames from Plano East.

Spencer Buchholz (138-pound) began the tournament with a major victory, taking the decision over Scott Salinas of Grand Prairie High School, winning 15-2. Buchholz advanced in the tournament to pin Jarod Davis from Brewer High School before winning his final match to secure gold with a 17-1 tech fall victory (a win by a 15-point margin) over Grand Prairie’s Anthony Montalvo.

Manolo Wrinkle ’20, Watkins, and Maguire finished the tournament with a win each.

“The new wrestlers are getting after their opponents and wrestling well,” Coach Menard noted, “Many have won or placed high in multiple tournaments this season and I’m excited about the future of the wrestling team. The new, younger wrestlers are talented, work hard, and their participation and effort bodes well for next year’s team.”

On Saturday, December 10 the Ranger Varsity Wrestlers headed to Frisco Centennial High School to compete in the toughest tournament of the year: The Titan Games.

Farrell (106-pound) finished the tournament with a win over Alijah Vincent from Frisco Centennial High School, a win secured with a pin in the second period. 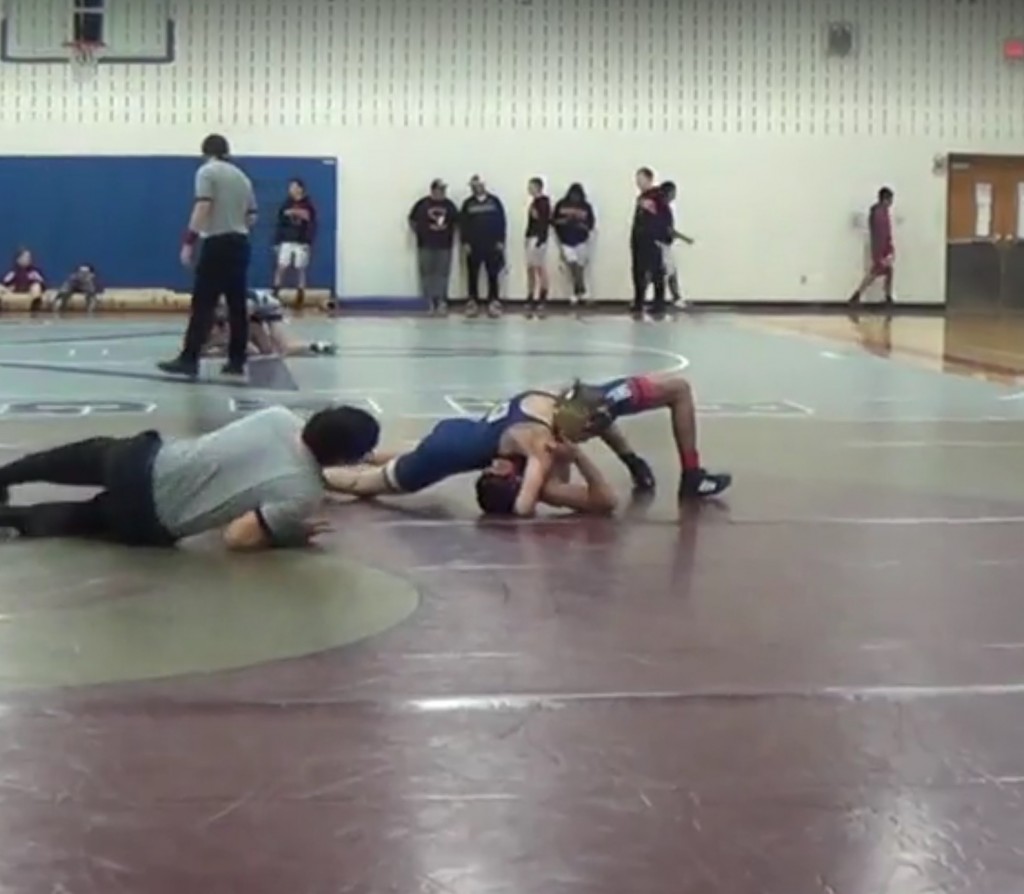 “Often wrestlers seem to give up in the third period,” Farrell commented on the tournament, “but something we could improve on as a team is working hard throughout the entire match.”

Dumbrigue posted a victory in the 113-pound bracket with an 8-3 decision over Davion Perkins from Lawton High School (Lawton, Oklahoma).

Godfrey closed out his first tournament at the 152-pound weight class with a pin in the second period over Jake Rogers from Seven Lakes High School.

“Titan Games provided us with our toughest competition all year. We had 3 seeded wrestlers in the tournament and none of those boys placed,” Coach Menard explained, “we host the Frank Holloran Ranger Classic January 13th and 14th which will be the best competition the boys have faced all year.” Coach Menard added that he is “looking forward to the workouts over the holiday break,” and that “these workouts are where the team can continue to improve and get better for the rest of the season and most importantly the districts, regions, and state.”

At the halfway point of the season, the Ranger wrestlers were prompted to fill out a short survey to share some thoughts about where the team could improve and some favorite moments in the season.

“What is your favorite part of the season/wrestling in general so far?”

By an overwhelming margin, the Ranger wrestlers felt that the camaraderie between teammates is by far their favorite aspect of wrestling. “This relationship,” one wrestler added, “is built by going through the struggles and the victories of this sport with the other guys.”

“What is your favorite memory of the season so far?”

The responses to this question ranged from “joking around with teammates after practice and during tournaments” to the younger athletes’ first tournaments and first pins. While the team created many memories in their first half competitions, there are many memories to come in the final six competitions leading up to the District Tournament. Tournaments were the consensus favorite type of wrestling competition and most of the younger wrestlers enjoyed the Tri-State Invitational the most.

“Where do you think the team could improve?”

The majority of the team agreed that “more time” and “working on technique” would greatly improve the team’s success. “We have a lot of new wrestlers, and all we need is time before we become a good team. Once the new guys learn a few more moves, and have more mat time we could be winning a ton of more matches,” one wrestler said. Others added that the team needs to “keep grinding” and “have patience,” and for some of the newer guys: “don’t be discouraged.” Overall the team could vastly improve in the areas of technique with “motion from every position,” but most of these improvements will come with time, experience, and practice throughout the rest of the season.

“Where do you think you can personally improve?”

Most of the responses were similar to the previous question, but with an added focus on “goals, motivations, and technique.” Some of the leaders of the team added that they will focus on “building others up” and “encouraging others to work harder during practice.” This attitude of leadership will serve the team greatly in the remainder of the season, preparing the team to peak in performance at the District Tournaments.

he team’s success in the first half of the season can be attributed to the hard work exhibited in practice and the attitude to attain their goals, even in the face of adversity, and the Rangers look to continue that success after the holidays.

Stay tuned for the next update of the Ranger Wrestling season, as the Ranger wrestlers prepare to take on the Skyline Raiders for the first dual of 2017 on Wednesday, January 4. Go Rangers!