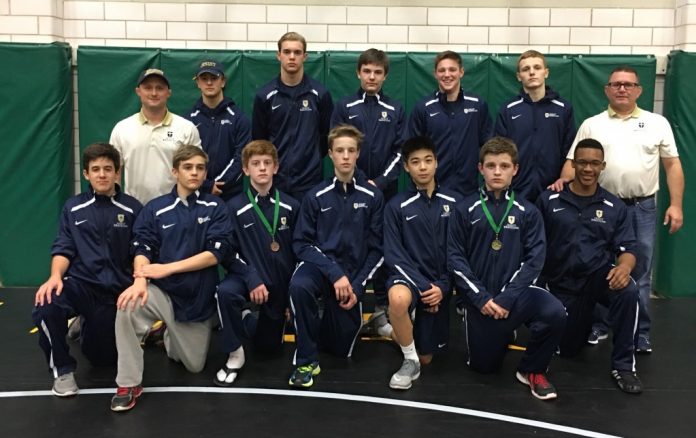 Nothing beats the feeling of a successful pin and the thrill of victory after intense hand-to-hand combat. Wrestlers everywhere are familiar with the blood, sweat, and tears that lead to such a triumph. Time in the weight room, sparring, and recovering in the offseason have all contribute to success in real, high-stakes matches, and Jesuit’s well-prepared wrestlers got to finally return to the mat this November.

The Jesuit Rangers wrestling season began on November 11th with the Arlington Invitational at Arlington High School. The varsity squad, consisting of Grayson Buchholz ’17, Derek Dumbrigue ’18, Gabriel Farrell ’19, and Grayson Godfrey ’18, traveled to Arlington High School on Friday to compete in the first tournament of the season. All four secured wins for the Rangers in their respective weight classes.

Head wrestling coach Ryan Menard commented that it was a “good start” in a competitive tournament and that they “wrestled competitively.”

“We have been spending a lot of time with technique,” Coach Tony Brown explained, “and you can see some of that in the tournament.”

Over on the junior varsity side of the tournament, junior Sean Maguire and sophomore Eugene Watkins each finished the tournament with a win. Sophomore wrestler Trip Hatton and freshman Liam Leahy won two tough matches in the tournament, Leahy finishing the tournament at fourth place. Freshman Spencer Buchholz placed first in his 145-pound weight class bracket, annihilating all three wrestlers he competed against.

Coach Brown voiced how using “technique [that worked] in practice translates to success in the tournaments.”

The Ranger Wrestlers took on McKinney Boyd in the first dual of the season on Wednesday, November 16th. The Rangers had been preparing for the meeting for a month, practicing technique and getting in shape.

“I was really proud of the whole team winning the majority of our matches,” Derek exclaimed. “Our dominant wins were a big boost in confidence for the whole team.”

Coach Menard explained to the team after the dual that the recipe to Wednesday night’s success was a combination of “going hard in practice and executing the technique.”

Coach Brown echoed a similar message, explaining how “the more we execute the technique, the harder we go,” a message the team will take to heart going into the weekend at the Heath Invitational.

The Ranger Wrestling squad will travel to Rockwall-Heath Friday and Saturday, November 18th and 19th to compete in the annual Heath Invitational. Go Rangers!