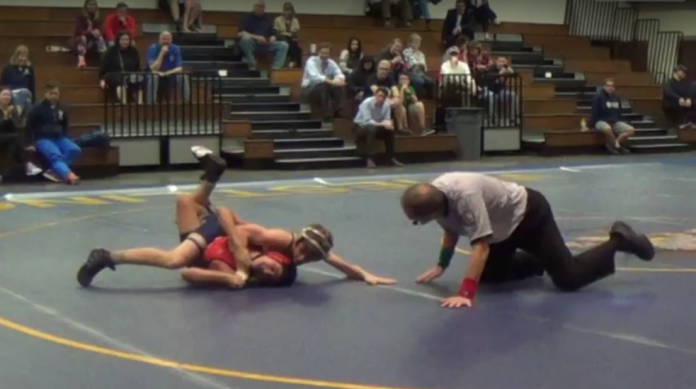 The dreaded feeling creeps into the veins of the Jesuit Rangers Wrestling team, this week amplified, more than others, anxiety. This week is Lake Highlands week, the week where the tradition of getting pounded every year is seemingly inevitable. But for Rangers this season, it is a week of excitement, energy, and focus, as they attempt to topple the wrestling giants.

“Practice the week leading up to and since the dual is just much more energetic,” senior Grayson Buchholz explained. “Things are beginning to click.”

Keeping the streak alive, freshman Spencer Buchholz (138-pound weight class) won in a tough overtime match to add another win for the team.

After a tough loss for freshman Manolo Wrinkle (145-pound weight class) and the first loss as a team for the night, junior Grayson Godfrey (152-pound weight class) answered with a second period pin over Chawn Wilson, adding a fourth win to the Rangers’ commanding record for the night (4-1).
Following a heartbreaking loss from freshman Adam Villalba (160-pound weight class), senior Michael Clarkson (170-pound weight class) hoped to make up for his teammate’s failed effort with a win. Unfortunately, after a dominating first two periods over Dylan Ghoreishi, Clarkson’s rib injury inhibited his performance leading to a faltering third period that allowed for Ghoreishi to tie the score and send the match to overtime. The pain worsening, the persevering senior fell, adding another loss for the team that night.

“It was a tough dual but we all fought well,” senior Michael Clarkson commented. “The freshman stepped up and wrestled some varsity matches, putting up a good fight.” Clarkson continued by adding that “we were dominant in almost every weight class.”

Following another heartbreaking loss, sophomore Connor Curreri (285-pound weight class) brought back the energy for the team with a dominating first two periods, finishing John Allen off with a third-period pin.

Hoping to capitalize on his teammate’s efforts, sophomore Gabriel Farrell (106-pound weight class) added another win with a dominating 10-0 first-period run and a ruthless second-period pin over Alec Marquez.

Adding the final victory for the team, junior Derek Dumbrigue (113-pound weight class) secured a 10-4 decision over Andrew Nixon to close out the night.

Finally, sophomore Henry Vance (106-pound weight class) had an exhilarating comeback but ended the night with a tragic loss by pin in the third period to add the final loss for the team to close out the night.

“This was the best the team wrestled collectively all year!” Head Wrestling Coach Ryan Menard exclaimed, “out of the 12 total matches wrestled we won 8 against a predominantly tough Lake Highlands team.”

The Ranger Wrestling team finished the night with an impressive 8-4 record against the Wildcats.