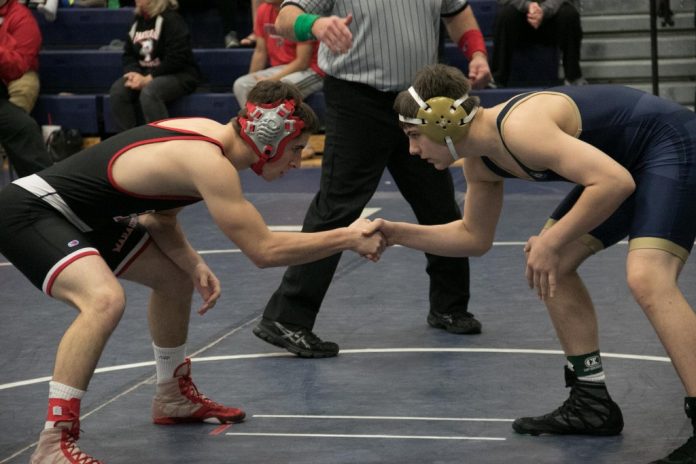 Seven wrestling mats, 17 schools, and 1 weekend of wrestling. For the varsity, the tournament kicks off on Friday night of January 13th. After the weigh-ins, the Ranger Wrestlers head to a familiar part of the school: the cafeteria. Once the nourishment and hydration period comes to a close, the wrestlers then proceed to the locker room for what seems like an eternity to await the verdict from the seeding meeting. With the seeds posted on TrackWrestling.com, the wrestlers check out the brackets to discover who their first victim will be. One hour later, the games begin.

First up for the Rangers, junior Derek Dumbrigue (106-pound weight class) started the tournament with a win over Nick Epperson from Marcus High School. The junior wrestler’s match started out rough as Epperson took down Dumbrigue, jumping out to a 2

point lead 20 seconds into the first period. Not shortly after, Dumbrigue responded quickly with a reversal to tie it up 2-2. Dumbrigue now on top, the junior wrestler proceeded to break Epperson down repeatedly until he managed to turn him for another 3 points. After a penalty by Epperson, Dumbrigue headed into the second period with a 5-2 lead. Epperson, elected to start with the advantage on top, and Dumbrigue made him regret that decision, catching him with another reversal and 3-point near fall extending Derek’s lead to 8 points. Finishing Epperson off, Dumbrigue pinned his opponent with 20 seconds left in the second period, securing a win to advance to his bracket’s semifinals. After competing well in a tough bracket, Dumbrigue placed fourth.

Following a tough loss to Rockwall-Heath’s Marshall Redding who boasted an impressive 23-8 record, sophomore Trip Hatton (126-pound weight class) bounced back in the consolation bracket with a win in the first varsity tournament of his wrestling career. Hatton’s opponent, Michael Parsons from Bishop Lynch, started out with a takedown in the first period for a 2-0 lead. At the start of the second period, Hatton scored a reversal to tie it up. After a grueling second period the score remained 2-2 heading into the third and final period. Parsons election to go down, and the sophomore began to prepare in his head how to approach pinning his opponent. The whistle blew and Hatton went to work, and as the clock wound down from 20 seconds, Hatton put Parsons on his back and pinned him with 15 seconds left in the match to advance with a win.

Senior Grayson Buchholz (145-pound weight class) began the tournament with a fall in the first period over Tristan Meier from Marcus High School. Buchholz started the match slow, allowing Meier to take him down 16 seconds into the match, but recovered quickly with a reversal soon after, tying it up 2-2. After a quick escape from Meier, Buchholz rapidly scored another takedown, taking a 4-3 lead. After a reversal from Meier, Buchholz responded with one of his own, this reversal, however, landed Meier on his back, allowing for Buchholz to secure a quick first period pin.

“I enjoyed seeing people win,” Buchholz commented. “We are implementing things from practice into competition and it really pays off.”

After a disappointing first round loss, junior Grayson Godfrey (152-pound weight class) bounced back with a tough decision over opponent Anthony Defreece from Hebron High School. Having already lost to Defreece earlier in the year at the Titan Games, Godfrey hoped to capitalize on this new opportunity to be victorious. After an uneventful 1st period, Godfrey 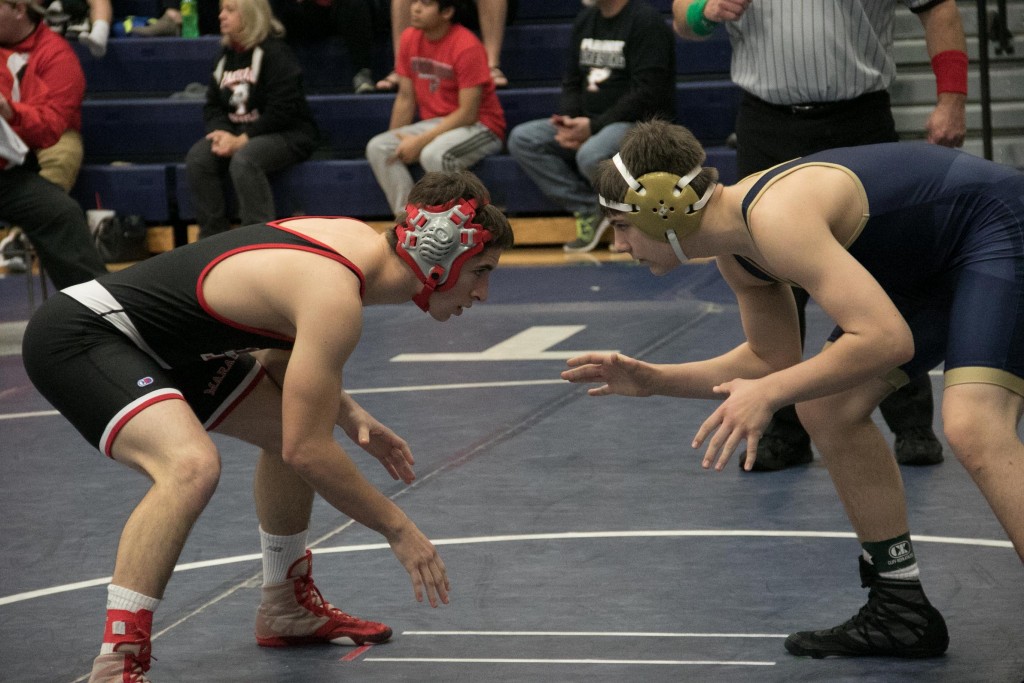 elected to take bottom to begin the 2nd period. 7 seconds into the 2nd period, Godfrey scored an escape, taking a 1-point lead. Defreece quickly responded with a takedown to make the score 2-1. Reacting with another escape to tie the score, Godfrey quickly took Defreece down to extend his lead 4-2. After a tough ride on top, Defreece managed to escape and Godfrey made a last second takedown at the very end of the period. Godfrey leading 6-3 going into the 3rd period, Defreece took bottom. After a very quick escape, Defreece took Godfrey down with a minute left on the clock to tie it up 6-6. 30 seconds later, Godfrey scored an escape to jump out to a one-point lead to secure the decision.

“I was really proud of being able to beat a guy that I had already lost to earlier in the season,” Godfrey explained. “It really boosted my confidence to overcome the mental challenge of seeing success in such a tough opponent who you know has already beaten you.”

Junior wrestler Sean Maguire (160-pound weight class) kicked off his first varsity tournament with a major decision over Bishop Lynch’s Paul Davis. After a scoreless first period, Maguire elected to take bottom for a chance to score. His decision paying off, Maguire scored a reversal good for 2 points. After a nice escape by Davis, Maguire’s lead

held 2-1. As the clock winds down to zero, Maguire scored a last second takedown to extend his lead 4-1. At the beginning of the third period, Davis began on bottom, but quickly scored his second escape to make the score 4-2. Sean quickly responded with a takedown, taking Davis to his back with a 3-point near fall. With a quick adjustment, Davis scored a reversal, but not soon after, Maguire followed with one of his own making the score 11-4. As the period comes to a close, Maguire put Davis on his back once again to secure the major decision (victory by an 8-point margin) 13-4.

Freshman Henry Vance (106-pound weight class), secured two wins in his bracket and finished third place. Following a disappointing first round loss, Vance bounced back with a dominating consolation semifinals match, where he pinned his opponent, Blake Guildry, in the second period and landed himself a spot in the consolation finals match for third place. Moving into the finals match, Vance started with a takedown on opponent Will Berry from Dripping Springs and immediately scored a 2-point near fall. With a 4-0 lead, Vance couldn’t hold Berry down and allowed him to escape. Near the end of the period, Berry caught Vance off guard and scored a takedown. Heading into the second period with a 4-3 lead, Vance took bottom for a chance to extend his lead. As the period came to a close, Vance scored a reversal to extend his lead to 3 points. Vance heading into the final period with a 6-3 lead, Vance quickly scored a reversal and secures the 8-3 decision over Berry and finished third place in his bracket.

“I think in the Ranger Classic I had a great 3 matches,” Henry explained, “and I enjoyed getting my first pin and medal.”

Entering the Ranger Classic with an already impressive tournament record and a tendency to place in the top 3, freshman Liam Leahy (120-pound weight class) started the tournament with a 7-0 decision over Elijah Ricks from Dripping Springs. After a 9-0 major decision over Kaden Nelson from Parkway High School (Parkway, Louisiana) in the semifinals, Leahy earned himself a spot in the finals to face Andrew Tamburo, also from Parkway High School. After a minute of wrestling, Tamburo scored a takedown and put Leahy to his back to take a 4-0 lead to start the finals match. Leahy battled back with a reversal, but Tamburo scored an escape to make the score 5-2. Finally, with 6 seconds left in the first period, Leahy scored a takedown to make the score 5-4. At the start of the second period, Leahy deferred the choice and Tamburo elected to take bottom. Leahy doesn’t let Tamburo up for the whole period, riding him out for 2 minutes, unable to turn him. At the beginning of the third period, Leahy took bottom for a chance to escape and score a point to tie it up. Unfortunately, after a tough third period, Leahy was unable to escape and lost the finals match finishing second in his very tough bracket.

Leahy commented that he “thought everyone did a great job.”

Continuing his impressive undefeated tournament record, finishing first in every one he entered in, freshman Spencer Buchholz began the tournament with a 10-0 major decision victory over Ollie Hastings from Rockwall Heath High School. After a second period fall over Flower Mound’s Paul Neild, Buchholz proceeded to the semifinals to face Zach Zwanendurg from Flower Mound High School where he pinned him in an impressive 22 seconds, landing himself a spot in the finals to face Nicholas Dean from Parkway High School. Buchholz quickly took control of the match with a takedown, and capitalized on it with a 3-point near fall. Dean battled back with a reversal on bottom to score his only two points of the match to make the score 5-2 heading into the second period. After a scoreless second period, Spencer took bottom and scored a reversal with 25 seconds left in the match to a secure a 7-2 decision for first place and another addition to his flawless undefeated tournament record.

After a tough first round loss, freshman Adam Villalba (160-pound weight class) fought back with a second period pin over Amir Rabah from Rockwall Heath High School, securing a victory in his bracket.