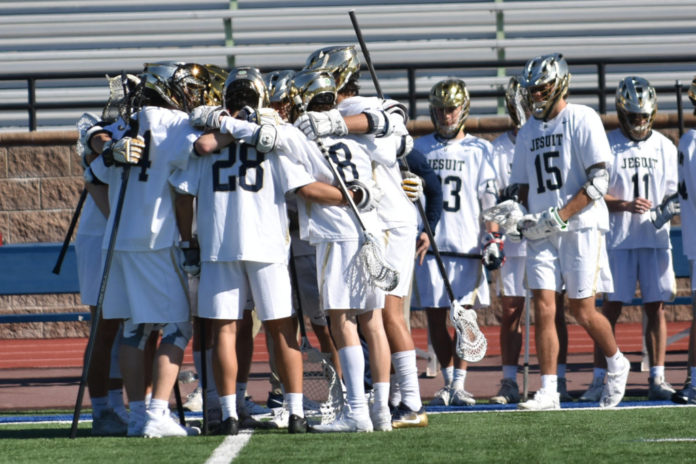 Undefeated regular seasons are truly a masterpiece in the history books. The 1934 Chicago Bears. The 1972 Miami Dolphins. The 2007 New England Patriots. They are never forgotten, for the memories and triumphs last forever. Furthermore, undefeated regular seasons drive the momentum for a huge playoff run. With teams getting closer and closer to the championship. Unfortunately, the TSHLL had to cancel the rest of the games due to COVID-19, and Jesuit Lacrosse’s incredible season had to come to an end. In their month long season from Feb 8 to Mar 7, they went 7-0, destroying teams and managing close wins. To truly celebrate their season, let’s take a week-to-week look back at their fantastic season. 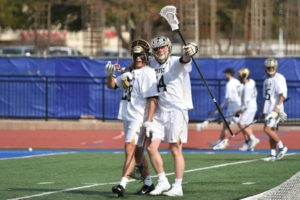 In their season opener on Feb 8, Jesuit Lacrosse decimated Frisco by 19-4, as the team scored 11 goals in the second half. Tilt Fernandes and Metz both scored 4 goals within minutes of the opening quarter, but Frisco responded quickly with 2 goals. A 2-goal game going into the second quarter, Jesuit scored 4 goals to lead 8-3 going into halftime.

It was all Jesuit throughout the second half, as Hovivian ’20, Vlasmisky ’21, and Metz ’20 all finished their hat tricks in the second half. Ultimately, these three dominated the game, with Cameron Martin ’23, Curran Rose ’21, Mason Chandler ’21, Tilt Fernandes ’21, and Sam Teachout ’21 all adding goals and assists. 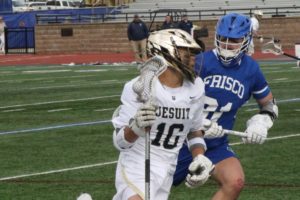 A week later, the team headed down south to face the Woodlands, a team which has remained highly competitive for a few years. The Woodlands scored first midway through the first quarter, before Sam Teachout stoutly responded with two goals right before halftime. In the second half, the Highlanders scored two goals within 45 seconds to regain their lead, but crucial defensive stops allowed for Jesuit to regain their lead through goals by Fernandes and Metz. After Hovivian scored two and Teachout got the icing on the cake, the win was secured late in the fourth quarter. The Rangers defense were the key in this win as Alex Chen ’21, Tyler Gazzam ’22, and Tristan Hassell ’21 were an impenetrable wall against the Highlander offense.

5 days later, Prosper scored early to rattle the Rangers, who fought back with four unanswered goals in the second quarter. Jesuit maintained a hefty lead throughout the second quarter, finishing the half with a 9-3 game. The Rangers continued to score unanswered goals, scoring 6 in the third quarter and 3 in the fourth. Curran Rose ’21 and Tommy Hovivian ’20 were real standouts in the game, each scoring four goals apiece, along with 3 goals by Billy Metz ’20. Additionally, faceoffs are an important part of lacrosse, for faceoff wins help set the tone for the game. The Rangers have consistently had two major players succeed in faceoffs, Henry Suarez ’21 and Mason Chandler ’21. Suarez went perfect for faceoffs against Frisco and Prosper, and Chandler won the majority of his as well.

Coming off a resounding win, the Rangers were ready to face one of the top teams in the state that Saturday: Austin Westlake. Westlake scored within one minute, but Tommy Hovivian ’20 scored right after following another Suarez faceoff win. The Rangers began to struggle, losing 3-1 in the first quarter. However, the team never gave up, as Fernandes, Rose, and Hovivian scored to regain a 4-3 lead before halftime. Westlake stood firm on defense before tying the game. Through goals by Martin and Rose, Jesuit obtained a two-goal lead in this back-to-back game. With goals by both teams, Westlake cut down this 2-goal lead to one late in the fourth, but the staunch Ranger defense held on for the win.

Henry Suarez ’21 said, “Westlake came up to here to send a message to us and Dallas teams. We came out on top in a hard fought game.”

Alex Chen ’21 said, “At the time of that game, Westlake was looking to defend their place as last year’s state champions, so we knew that this would be one of the toughest games of our season. The Westlake team had a ton of talent, but our team came together and played the best lacrosse I’ve experienced in a long time. I remember starting the game, and they took a quick 3-1 lead against us. However, we did not let that affect how we played. We had been in this situation before and thanks to Coach Surran, we knew how to deal with adversity.” 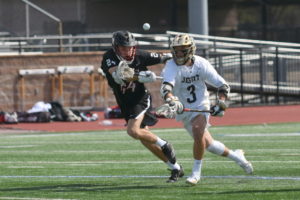 This instrumental win seemed to propel the team to new heights, destroying St. John’s from Houston 19-3 a week later. Rose, Metz, and Suarez scored 4 goals in the first quarter, before Jesuit scored 11 unanswered goals by late in the third quarter. Adding four more goals in the fourth quarter, the Rangers had an absolute riot. Curran Rose ’21 and McAllister Hobbs ’22 led the way with four goals apiece, as Sam Teachout ’21 and Billy Metz ’20 recorded hat tricks.

On Wednesday, Mar 4., Jesuit Dallas and ESD clashed in a rematch of last year’s THSLL Division I State Semifinal. Regarded as one of the top rivalries in Texas, the Rangers and Eagles have had six of their last seven matchups be decided by one goal, and the last two regular season showdowns were decided in double overtime. Jesuit defeated ESD in last year’s regular season matchup, besting the Eagles, 8-7, in a double overtime game that took place over two days due to a lightning delay. ESD ended Jesuit’s season last May with a 5-4 win in the state semifinal en route to capturing the THLL State Championship with a win over Highland Park.

So yeah, this was a big game. 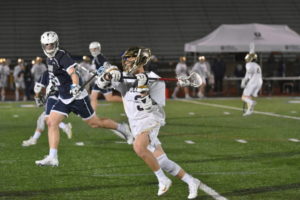 ESD scored two goals early before juniors Rose, Suarez, and Fernandes scored crucial goals to obtain a 3-2 lead. After the Rangers went 5-4 at halftime, ESD really gave the Rangers a run for their money through, procuring a three-goal lead towards the end of the third quarter. Despite Cameron Martin ’23 scoring a goal to end the streak, ESD rebuilt their three-goal lead. ESD continued to keep possession to secure the win. However, this game was never out of reach for the tenacious Rangers. With both Rose and Hovivian added goals and McAllister Hobbs ’22 scored a goal with 8 seconds left to equalize the game. Goalkeeper Daniel LePino ’21 came up huge in the cage with 14 saves, including four stops in the fourth quarter to open the door for the rally. After a close first overtime, Hobbs scored the game winner in double overtime to give Jesuit the W {and major bragging rights). 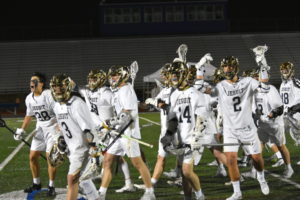 “It was awesome because we had tremendous fan support who showed out despite the downpour,” Henry Suarez ’21 said. “As a team, we we fought for one another and just believed that we would find a way to win. It was a team win.”

Alex Chen ’21 said, “The combination of the rainy weather and packed stands along with the game being an important district matchup made this game all the more memorable. Winning the game was great, but my favorite moment from that game was when we came together at the end, both the team and the Jesuit student section, and did the Jesuit yell.”

Tristan Hassell ’21 also commented on the win, saying, “ESD takes its spot at the top of my list not only because of how we won the game, but mostly because of how much I love making ESD kids angry. “

On March 8, the Rangers faced Lake Travis, beating them 10-6, as multiple different players contributed to the score. Star-player Tommy Hovivian ’20 scored another hat-trick. Billy Metz ’20 scored his 14th goal of the season, as Caiden Vlasimsky ’21, Tilt Fernandes ’21, and Sam Teachout ’21 all added one goal each. The team outscored Lake Travis 7-3 in the second half, after a closely tied 3-3 first half. Mason Chandler ’21 and Henry Suarez ’21 both had strong faceoff performances, and Cameron Martin ’23 added another one. Star-player Tommy Hovivian ’20 scored another hat-trick. The continuing streak of wins, especially the intense, double OT victory vs. ESD, really helped to elevate the team morale. 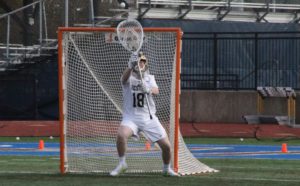 Congrats to all seniors who will be playing lacrosse in college! This is a great accomplishment!

The team finished as the top team in the southeast region, and based off their astounding record, I could see them capturing a third state title. Henry Suarez ’21 expressed the same sentiment, saying, “Coach Surran always pushes us to be our best in practice and as an  upperclassmen we hold each other accountable. Our goal is to win state so, each practice plays a part in creating our bonding relationship as well as time spent together in the locker room. Our commitment to one another provides a wolf pack mentality that we are strongest together and will protect each other.”

“I think the special thing about this 2020 team was that we never gave up and we had excellent leadership along the way. We fought through adversity time and time again, and all the long practices, late nights, and early mornings paid off, ” said Alex Chen ’21. “Also, Coach Surran believed in each and every one of us and made sure we reached our full potential everyday. Without his guidance or leadership, we wouldn’t have been in the place we were this season. I truly believe that had our season not been cut short, Jesuit would have been the 2020 State Champions.”

Looking forward, the team is excited to play next season and make another run for the TSHLL state championship. Suarez continued, saying, “[We are] looking to continue to raise the standard of Jesuit lacrosse and keep the wolf pack family mentality as strong as ever. We had high expectations this year and felt we had not yet played our best lacrosse. The team faced challenges and adversity head on and overcame them. Going into next year, we have unfinished business and hope we are able to bring home a state championship not only for us but for all legacy Jesuit teams before us. We are forever more a brotherhood.”

Tristan Hassell ’21 expressed the same sentiment, saying, “I am excited for next season because it will be a continuation of what we started this year, and a culmination of the 2021 class’s efforts in lacrosse throughout our high school careers. I feel that my fellow seniors and I have been exposed to invaluable leadership throughout our years playing lacrosse at Jesuit, and we will use what we have learned to lead our team to victory next year. ” 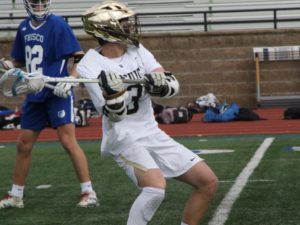 With a dynamic offense, strong faceoff players, and a resilient defense, they had all the characteristics of a great team. It is sad to see their season end like this. The team performed fantastic, and I highly recommend you take a look at each player’s highlights posted on @JesuitLacrosse, the team games, and any team highlights video. This special season will not be forgotten.

Check back to The Roundup for more coverage of Jesuit lacrosse!