More
JesuitRoundup.org is brought to you by:
Sports Football Jesuit Football Continues to Roll with Dominant Win over MacArthur
Facebook
Twitter
Email
Print 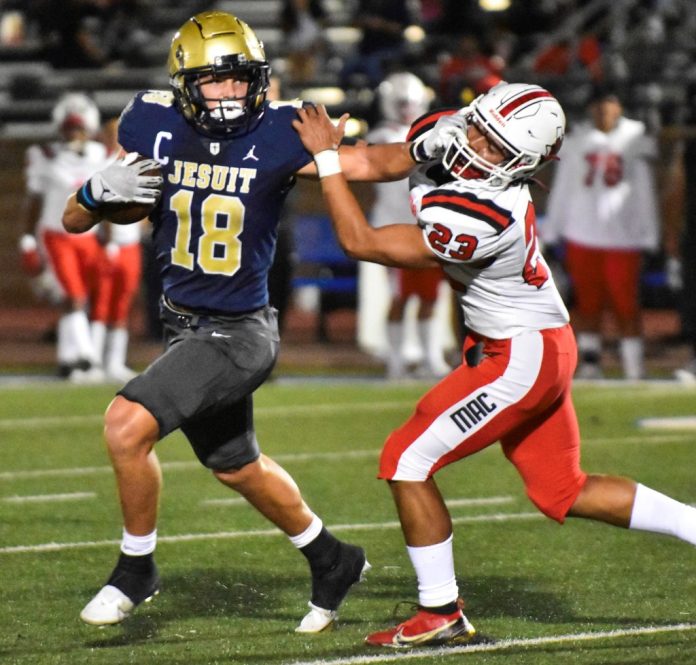 Quick recap of the past week before we get into the MacArthur game: Jesuit was coming off a barnburner of a game against Lake Highlands, which featured a frenzied second-half comeback that eventually gave the Rangers the win. They headed into this home showdown with MacArthur undefeated in district play, with the lone loss on the season coming at, ahem, Rockwall, but I’ve already said what I wanted to say about that one. Anyway, let’s get into MacArthur!

Shocking as it might be to believe, both teams battled to a scoreless tie at the end of the first quarter. However, during the second period, Jesuit’s offense came alive. The Rangers drove the length of the field and superstar running back Robert Fitzgerald ’22 pummeled it in from a yard out to give Jesuit a 7-0 lead. And after a failed counterattack by MacArthur, the Rangers drove down the field again, although they got to the Cardinals’ 16-yard line before quarterback Gage Roy ’22 hit star wideout Hunter Krepp ’22 for a touchdown with 1:17 left in the half, and the score stayed at 14-0 heading into the halftime break.

Until about the nine-minute mark in the third quarter, there was no scoring by either team. However, kicker Cade Jordan ’22 had his time to shine in the second half, burying two clutch field goals to extend Jesuit’s lead to 20-0. After Jordan’s exceptional kicking, the Rangers got the ball back and drove the ball all the way down the field and Roy scampered into the end zone on a QB sneak to further extend Jesuit’s lead to 27-0 heading into the fourth quarter. And in that fourth quarter, backup quarterback Charlie Schmidt ’23 came into the game and hit wide receiver Joe Staubach ’22 for a 13-yard TD pass to put the dagger in MacArthur’s throats. The team exited Postell Stadium with a 34-0 shutout win.

The defense came to play this week, shutting out MacArthur and only giving up 44 yards (!!) of total offense compared to Jesuit’s 360 on the game. In addition, they limited the Cardinals to a mere 18 passing yards and 24 rushing yards, while the Rangers had 254 and 106 in each respective category. Roy had a near-flawless game throwing the ball, passing for 220 yards, and throwing his only touchdown strike to Hunter Krepp.

And speaking of Krepp, he had himself a game as well, as I’ve said many times this season, racking up five receptions for 83 yards and a touchdown. David Long ’22 spearheaded the defense with six tackles and one tackle for loss. I am extremely impressed with every aspect of the team in this game, and I have no complaints, as the defense had an absolutely terrific performance, and the offense sat back and picked apart the helpless MacArthur defense. Fantastic win for the team.

That’s it for this (extremely late) piece, but stay tuned to The Roundup for more Jesuit football and sports news!