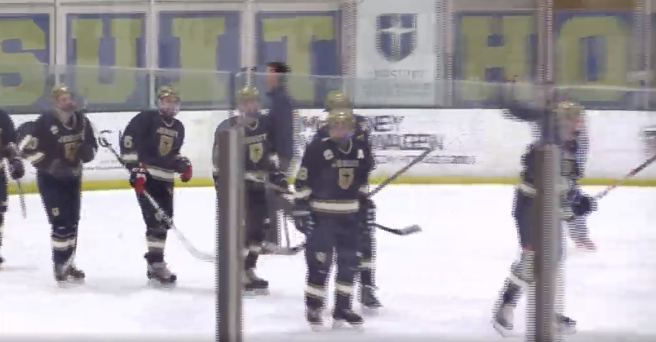 The scoreboard shows that the opponent is winning, and the pressure is on. It pushes the player to his limits, and in a heartbeat, he has the puck again. He takes this moment to his advantage and dangles past the other team’s offense, pushing the puck forward with him, and BOOM! The number on the scoreboard for his team marks up one and the crowd is exhilarating!

Jesuit Makes 2 Wins Out of 3 Games

The season only recently began, and Jesuit Varsity Hockey has done it again! Two wins out of three games! It was a victory against Keller and Allen, and a loss against Coppell. Of course, a loss is unfortunate, but that doesn’t affect Jesuit’s team spirit. “I thought the Coppell game was bad. We struggled, yet I think what was impressive was that we were able to bounce back the very next week and beat Allen”, said senior Jonmichael Dragojevic. 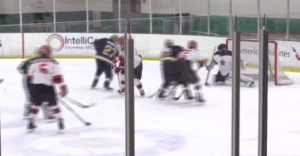 As for the Coppell game, that wasn’t the best day for Jesuit. Off to a good start, several goals were made by Matthew Wrobel, Bryce Clark, and Luke Toppins. However, Coppell had struck against that in the opening period and made a lead of 1-0. “I contribute on offense for both the Keller and Allen game. During the Coppel game, I tried to contribute offensive just had poor luck,” said Jonmichael. As the game went on, Clark Parlier of Coppell had made Jesuit’s comeback oblique and complicated, bringing Coppell to a higher lead of 2-0. Jesuit tried to come back with 20 shots at Coppell, but that didn’t pay off, making the final score 2-0, leaving the win for Coppell.

Overall, Jesuit Varsity Hockey is off to an amazing start this season. Jonmichael proudly points this out as he says, “What stands out the most is in these games is our constant positivity and ‘never give up’ mentality. This team will fight to the very end, and we won’t let the moments in the game in which we aren’t dominating play to dampen our positivity.” As one who contributes a good amount into the games, he also said, “I think I need to work on shooting the puck more. Sometimes, I’ll hold on to the puck too long and eventually a scoring chance is missed.” Having done great these first few games, and always having a bit of room to improve, Jesuit Varsity Hockey will hopefully continue to push forward to make more wins! 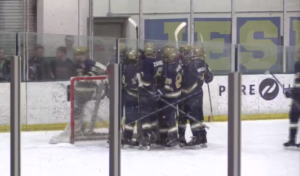 The game against Allen was an outstanding one for Jesuit. Right from the start, Allen was being outshot left and right, 34-31. Things quickly got tense when Allen made a strong lead. They had outshot Jesuit 12-9 in the second period. However, Jesuit recovered and got back at Allen. With only about 5 minutes remaining, sophomore Seth Dragojevic gave a feed and brought the score to a lead of 2-1. This forced an overtime in which Jesuit slotted a puck with 47 seconds left, making the final score 3-2. “Everyone did their jobs and Bryce Clark ended up scoring in overtime to win the game,” said Jonmichael.