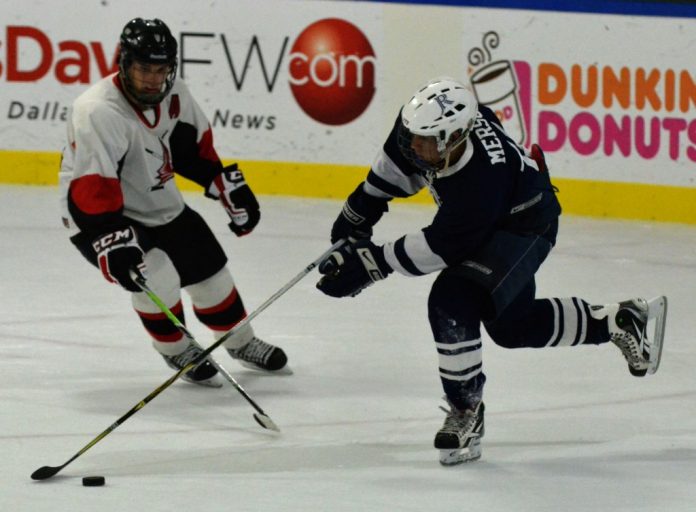 The Jesuit Hockey team has battled all season long, fighting back after tough losses and carrying their momentum from fantastic wins; however, as the season runs down, the playoff “animal” lurks in the distance, reminding the team of their season-long goal. The team remains strong despite the obstacles it faces, hoping to defeat other strong teams in the playoffs as they fight for a championship.

First, on February 4th, the Rangers faced Frisco but fell short in a shootout 2-3. Senior leaders Holton Schwartz and Louis Helsen both scored and fellow senior goalie George McBey made 33 saves in net. Center Carson Platt ’17 talked about what he learned from the loss, saying “Although the loss in the shootout was sad at the time, it taught us that we can play and compete with any team.”

The following weekend, on February 6th and 7th, Jesuit Hockey continued their run in the 2016 Texas Amateur Hockey Association (TAHA) State Tournament, facing off against Allen and John Paul II. It is worth mentioning that the Rangers began the state tournament on January 31st, with a 3-1 win against John Paul II, led by scores from Helsen and Nick Mersch ’16. The team then continued its run with a whopping 7-1 blowout against Allen, but sadly lost in the championship game against John Paul II in a brutal 2-3 loss in overtime. Commenting on the tough loss to JPII, Coach Kevin Smith noted “I would say this was one of those instances where the number of times we have played them over the past couple years finally caught up to us.  I don’t want to take anything away from JPII as they played a solid and disciplined game.”

Bouncing back from the tough loss at the state championship, the Rangers beat Plano East/Lovejoy 4-1 on February 11th. Helsen, Bryce Clark ’19, and Anthony Calabrese ’18 all lit the lamp for the Rangers, and McBey got the win, making 22 saves. Platt recounted the importance of this win to the team’s confidence, saying “Winning is always a confidence booster. Plano East gave us some trouble throughout the whole season. Being able to beat them finally in the finale of the season motivated us.”

The following week on February 18th, the Rangers suffered a minor setback as they dropped a game to the McKinney Lions 2-4. Although freshmen Preston Schwartz and Matthew Wrobel found the back of the net, it wasn’t enough as they Rangers gave up four goals in the loss. Coach Smith imparted some hockey wisdom in commenting on the loss, noting that “Sometimes you deserve the better end of the deal, but nothing is owed to you in the game of hockey.”

Next, the Rangers faced the Allen Eagles and took care of business, defeating them 4-2 on February 23rd, a game which included goals from Michael Schmidt ’16, Preston Schwartz ’19, and JonMikal Dragojevic ’19, and 28 saves from powerhouse goalie McBey. Carson Platt commented that the game “definitely gave the younger guys confidence that they can score and contribute to the team’s overall success as well.”

For the final game of the regular season on February 25th, the Rangers ended on a high note as they annihilated John Paul II 6-2. As fitting for his last game as a Jesuit Ranger, Louis Helsen ’16 scored a hat trick while Calabrese, Wrobel, and Clark all scored in the last game of the regular season. Platt was proud of the team’s efforts in this final game as “It showed that we were the better team. If we had competed the same way in the state championship games, then we would be the ones going to Nationals, not JPII.”

With the regular season over, the Jesuit Rangers then faced the competition in the 2016 AT&T Metroplex Hockey League. First up, once again the Rangers faced the John Paul II Cardinals, and again beat them with a score of 4-3 on March 1st. In a come-from-behind win, Calabrese, Duncan Caddedu ’16, and Schmidt all scored for the Rangers, including two third period goals from Schmidt that gave the Rangers the lead and insurance. However, on the next day of the tournament, the Rangers sadly ended their season with a heartbreaking shootout loss to Frisco 3-4. Once again, many different players scored for the Rangers, including Calabrese, Mersch, and Schmidt. After the end of regulation and a scoreless overtime, the two teams headed to a shootout. In the opening rounds, Helsen, Dragojevic, and Schmidt all scored for the Rangers, but Frisco was able to compete with the Rangers. Finally, after thirteen long rounds in the shootout, Frisco was able to score and then stop the Rangers, ending the team’s season. Coach Smith was proud of his team, but was said to see the seniors go, saying “It’s always tough to watch the seniors as their career comes to a close as they were the players that paved the road for those who are currently underclassmen.”

As the long season came to a close, Platt reflected on the team’s success and commented that he is already looking forward to next season as a senior, noting that “As a senior, it will be my role to lead my young team to the National Championships. I am looking forward to playing for my school for one last time.”

Be sure to congratulate all the Jesuit Hockey players on a successful season!