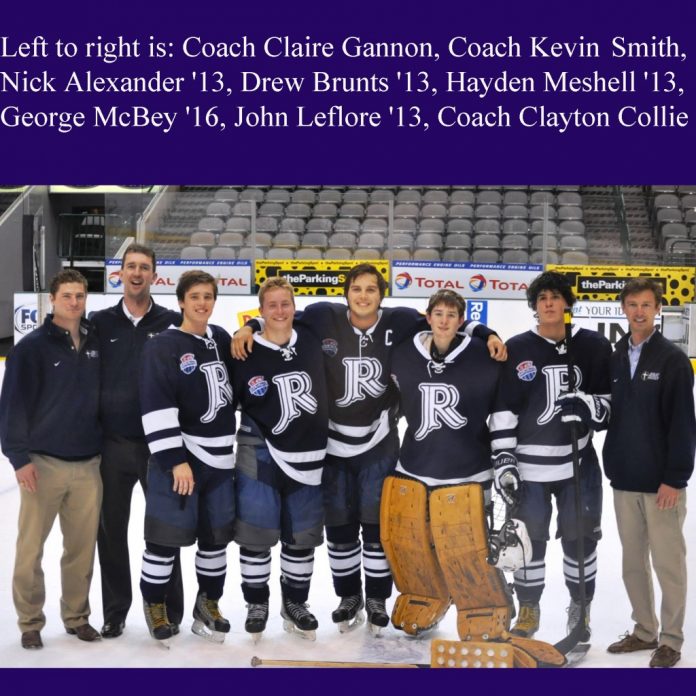 With the frosty air contrasted by the puffs of steamy breath of the players, the smooth feeling of the frozen ice beneath the sleek, steel runners of the skates gliding across the stadium floor, and the sound of the sticks slapping against the puck muffled by the roar of the crowd filling the seats surrounding the rink, a hockey player’s dreams become reality. Love or hate the sport, we Jesuit fans can definitely be proud of our Rangers’ Hockey team.

After a nearly undefeated season, having lost only to Coppell and McKinney in regular season play, Jesuit’s varsity team made it to the state championship game on March 7, 2013 and won 4 to 2 over Plano West. As a result of this win, the team then traveled to the National Championship Tournament in Coral Springs, Florida and went 2 and 1, an incredible feat that highlighted an already amazing year. With the stellar performance, a select few of Jesuit’s players were selected to play in an even more elite game, the AT&T Metroplex All-Star Hockey Game.

Five of our own Rangers were selected to play in the all-star game on April 20, 2013 at the American Airlines Center, the home of the Dallas Stars. Forwards Hayden Meshell ’13, Nick Alexander ’13, and John Leflore ’13, defender Drew Brunts ’13, and goalie George McBey ’16 all received the honor of playing hockey against the best players in the state of Texas in the game that marked the end of the 2012-2013 season. On top of that, coaching the West All-Star team was Jesuit’s own Kevin Smith (affectionately dubbed Coach Smitty), head coach of the Ranger Hockey Team.

Unfortunately, the West All-Stars lost to East All-Stars 7 to 2. This did not disappoint the players too much, though. McBey ’16, who actually played the game on his birthday, said he “was just happy to be there.” After the terrific year Jesuit had, Meshell said that the all-star game “was just a chance to get on the ice and have fun, coming down from the amazing ride this year was.”

Meshell, winner of the 2012-2013 Texas offensive player of the year and three time All-Star forward, continued on to explain his opinion of the team before the season started, “Coming into this season, I wasn’t expecting much. We had several good senior players but I wasn’t expecting to have the amazing season we had. It’s not really easy to put into words. I’ve been blessed with many accolades this year. It’s going to take awhile to get used to the fact that it’s over.”

The team would like to thank all the fans who came out to support them throughout this stellar season, the parents who volunteered for driving and food, and all the coaching staff who led the team to the amazing accomplishments they had this year.

Ranger Hockey is sad to see so many talented seniors go, but we can all congratulate them for their many accomplishments, as they graduate May 25th. The class of 2014 has a big legacy to live up to, but until next season, we can look forward to the new faces who will take the places of the graduating class as new leaders who will step up to lead our team to victory.