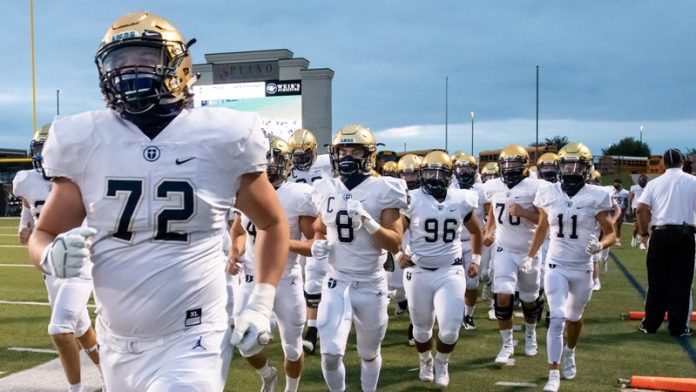 Jesuit came off their tightly-contested 36-29 win over the Choctaw Yellow Jackets. Eager to continue the momentum, the Rangers garnered a strong win over the JJ Pearce Mustangs.

And boy, was that win ever convincing and strong. Perfect adjectives to use.

After getting thrashed by Rockwall and then rebounding with the win over Choctaw, I was predicting that the Rangers would add another win to their total against JJ Pearce. I just did not think that Pearce was a very good football team. And while they weren’t the worst ever, it took them far too long to get some points on the board as Jesuit’s relentless offensive attack, as well as some timely plays from the defense, spelled doom for the Mustangs early in the game. Anyway, I’ve been talking too much, so let’s get into it.

The game started with some fireworks on the first drive for the Rangers. Starting quarterback Gage Roy ’22 hit star receiver Hunter Krepp ’22 for a 32-yard touchdown strike to put Jesuit up 7-0 early in the game. On their next offensive drive, Jesuit promptly marched down to Pearce’s 4-yard line, and Robert Fitzgerald ’22 took it to the house from 4 yards out to give the Rangers a 14-0 lead. The Mustangs tried to add their first points onto the board to end the first quarter, but Fitzgerald had other plans, as he snagged an interception off the Mustangs’ quarterback and took it 44 yards to the end zone for a pick-six, extending Jesuit’s lead to 21-0. In the second quarter, the Rangers got to their own 48-yard line before Roy let a 52-yard bomb go, and the ball was tipped up and eventually landed in the hands of receiver Joe Staubach ’22 for an incredible touchdown and one of the biggest plays of the game thus far. However, the Mustangs got a chance to respond and took it, as they marched down the field in 10 plays and 75 yards and tacked on seven to their total. But that didn’t sit well with the Rangers, as they got down to the edge of the goal line and Roy snuck it in from 1 yard out to give Jesuit a whopping 34-7 lead going into halftime.

There wasn’t a lot of scoring in the third quarter, as neither team could really get anything going until about the five-minute mark, as Jesuit marched down the field into the red zone and running back Cameron Martin ’23 ran it in from 17 yards out to extend Jesuit’s lead. And in the fourth quarter, backup quarterback Charlie Schmidt got his first taste of the action and he promptly hit paydirt on a 12-yard touchdown scamper to add to the Rangers’ lead. The Mustangs tried to mount a late comeback in the fourth, as quarterback John Gesin threw two fourth-quarter touchdown passes, but by then it was too late, as his second one came with just over two minutes remaining in the fourth quarter, and by then it was a 47-21 lead for the Rangers. And that score would remain all the way to the final whistle, as Jesuit took a 47-21 win over the Mustangs to move to 3-1 on the season and 1-0 in district play.

It was an absolutely fantastic game for Jesuit on both sides of the ball, as the offense came out firing on all cylinders, especially in the first half, as the Mustangs’ defense had no answers for a high-powered Jesuit offense that was in sync practically the entire game. The defense came to play as well, as they held Pearce to 127 rushing yards total compared to Jesuit’s 202 and shut them out on fourth-down conversions (0-2). QB Gage Roy ’22 completed seven passes for 157 yards and two touchdowns, and Cameron Martin ’23 was a force on the offensive side of the ball, as he racked up 91 rushing yards and a touchdown as well as 57 receiving yards and another touchdown. This was an extremely solid win for the team and I can’t really find fault with how they did, at least statistically. The receiving was slightly underwhelming, especially Krepp because we’ve been getting used to these 100-yard, 150-yard performances at this point, but keep in mind Roy only threw for 157 yards the whole game. And the rushing attack, led by Martin, was spectacular and spearheaded the Jesuit offense. So a great win for the team, and a great momentum boost heading into a massively important showdown with Lake Highlands.

Well, that’s it for this piece, but stay tuned to The Roundup for more Jesuit football and sports news! And come support the Rangers as they take on Lake Highlands this upcoming Friday, October 1, at Postell Stadium! Kickoff is set for 7 PM!