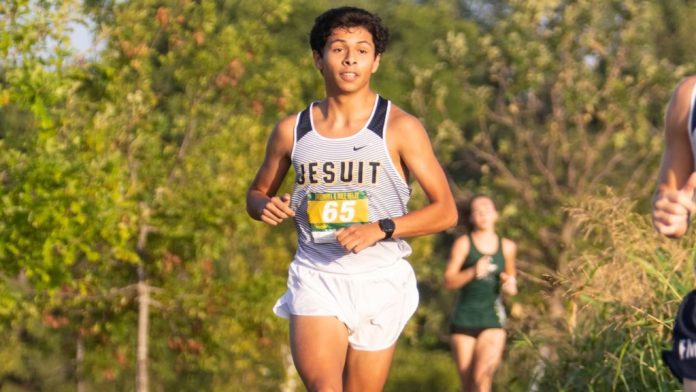 Coming off a difficult, hilly course at Lovejoy, Jesuit Cross Country moved into the competitive part of their season, looking to solidify themselves as one of the top teams in the region. Here’s a recap of their season thus far.

First, in the Rick Neil Memorial Invitational, Jesuit dominated with first-place team finishes in both the Varsity and JV races. On Varsity, the Rangers had their first 8 runners in the top 11, led by Enrique Borrego’s 15:56 and first-place finish, who managed to break 16 minutes for the first time. In Junior Varsity, the Rangers, led by Jacob Ovenshire and Griffin Fellows’ second and third-place finishes, continued their dominant display with seven runners in the top 10. Although this race lacked the stiff competition the Rangers were used to facing, both teams still came out and ran strong, with Varsity scorers averaging an impressive 17:18.

Next, in the Haltom Stampede, Jesuit came second in both Varsity and JV races – edged out in both by Denton High. In Varsity, Jesuit had 2 runners in the top 10 of a highly competitive race, with a second-place finish from Borrego and a tenth-place finish from sophomore Charlie Thornton. In JV,  Jesuit was led by Brody Pawsat and Jacob Ovenshire’s eighth- and ninth-place finishes, with Pawsat breaking the 19 minute mark for the first time.

Then, on September 25, the Rangers competed in two meets, the McNeil and Lake Highlands Invitationals. Jesuit sent its Varsity team and JV team to the McNeil Invitational, and Borrego was invited to participate in the varsity gold race. Borrego finished 13th with a huge PR of 15:41, cementing himself as the 64th ranked high schooler in the entire state. Additionally, both Varsity and JV teams finished as runner-ups in the extremely competitive open races. At the Lake Highlands Invitational at Norbuck Park, JV finished fifth, led by Drew Lamberson’s first-place finish.

Finally, Jesuit hosted its own meet on October 2nd at the Prestonwood Polo Club. The meet was a huge success, with over 2500 runners and 84 teams. Jesuit placed ninth in the Varsity race and fourth in the JV. Varsity was led by ninth-place Borrego, and JV was led by Ovenshire again in 14th place. The team hopes to hold the race at the same location next year.

In the district meet, Jesuit came first in both the Varsity and JV races, a commanding, confidence-boosting performance that allowed them to qualify for the Regional Championships for a second year straight. The Varsity dominated with all 7 runners in the top 20, and JV’s top 8 all placed in the top 20.

Jesuit will look to compete in the Regional Championships on October 25th against a stacked field. Stay tuned to the Roundup for more cross country and sports news!