On Wednesday, December 30, the varsity basketball team tipped off against JJ Pearce, starting district play for the first time in their new district. The team has been able to find success early and continue to build ass they get closer to the playoffs.

Coming off a two-week break due to COVID-19 exposure, the team took on the Mustangs at home. The Rangers struggled behind the arc, shooting only 27.8% from 3, which was over 10% below their season average. The Mustangs were able to capitalize off Ranger turnovers, scoring 21 points off 15 turnovers. Pearce also had the edge on the boards, grabbing 24 rebounds compared to Jesuit’s 16. All these factors combined to lift Pearce past the Rangers with a score of 60-38, handing the Rangers their first district loss.

Hoping to return to form after their loss, the Rangers traveled to Lake Highlands. With student fans at the game for the first time all season, the Rangers came out hot, putting up 22 points in the first quarter. Led by Gavin Perryman ’21 and Conor Moore ’21, who put up a career-high 20 points, the Rangers shot nearly 53% on the game. Despite the Wildcats’ effort to mount a comeback in the fourth, the Rangers picked up a big road win, winning 76-64.

Traveling to MacArthur to take on the Cardinals, the Rangers built on their win over the weekend. Pushed ahead by Gavin Perryman’s 30 points, Jesuit made it rain from behind the arc, shooting 60% from downtown. Perryman collected 6 made threes while both Cal Linn ’21 and Ben Johnson ’22 hit 3. The Rangers strong shooting performance allowed them to put up 29 points in the second quarter, which ended with a buzzer-beater from Camden Roy ’21. The Rangers finished on top, beating MacArthur 75-63.

Returning home, the Rangers took on Nimitz and continued their 3-game win-streak. With points pouring in from every member of the team. Dylan Gibbons ’23 picked up 6 points in his varsity debut. Also, Ben Johnson ’22 went 4/5, putting up 8 points. Perryman again cleared double digits, scoring 16 points in 18 minutes. A strong defensive effort kept the Rangers on top, holding Nimitz to 18 points in the first half. This strong defense and overall scoring helped the Rangers win the game 67-34. 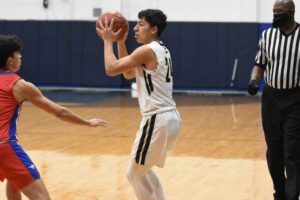 Playing at noon the next day, Jesuit traveled to Richardson to take on the Eagles. The Rangers shot the leather off the ball, shooting 53% from 3 and 51% overall from the field. This stellar offensive showing was led by Perryman, Johnson, and Moore, with the trio putting up 34, 14, and 14 points, respectively. Going into the fourth, the Rangers led 65-56, but they, unfortunately, let it fall away in the fourth, losing 80-77 on buzzer-beater.

The Rangers have gotten off to a strong start in district play, going 3-2, and they hope to continue to improve and gear up for the postseason. The Rangers will take on Richardson for a rematch against Richardson at home on Tuesday, January 19th. Make sure to tune into the live broadcast to cheer on the team!

Stay tuned to The Roundup for more news on the basketball team!