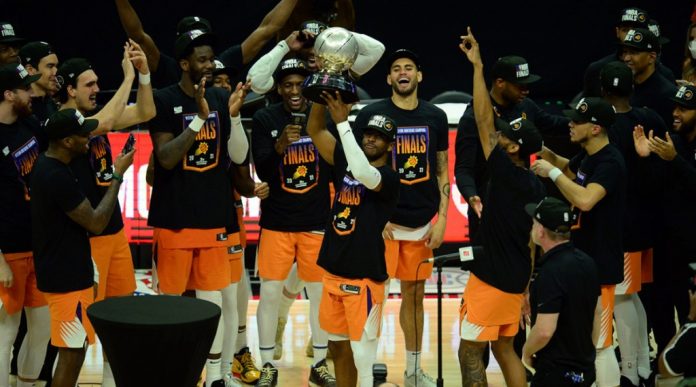 Chris Paul has played in the NBA for 16 seasons. Not one of those seasons has resulted in a trip to the NBA Finals, much less an NBA championship.

This season, with the Phoenix Suns, Paul has helped lead a team that went 34-39 last season, all 8-0 bubble runs aside, to a 51-21 record and an NBA Finals appearance. And it cannot be denied that every team Paul has been on for the past ten or so seasons has benefited tremendously from his presence. He brings a type of leadership to a team that cannot be taught, only inherited from years and years of hooping on the biggest stages. His passing savvy is unquestioned and some of the passes he’s made over the years and the ways he’s set up his teammates time after time boggle the mind. His clutch gene is one of the best in the game, and if his team is in need of a basket late? Better call Paul. His defense is sorely underrated, and he is one of the more under-appreciated perimeter defenders in the game, not really mentioned with the likes of the Kawhi Leonards and the Paul Georges, or say, the Marcus Smarts or the Patrick Beverleys. And above all, he helps his team win consistently. But today, I’m going to analyze that effect. That winning effect.

Coming off the 2010-11 season, the LA Clippers had posted a dismal 32-50 record and while they had some promising pieces in reigning Rookie of the Year Blake Griffin and dunking and blocking machine DeAndre Jordan, they still needed one more piece to thrust themselves into playoff contention. Enter Chris Paul. After sending Eric Gordon, Chris Kaman, Al-Farouq Aminu, and an unprotected first-round pick in the 2012 NBA Draft previously owned by the Minnesota Timberwolves to the then-New Orleans Hornets, the Clippers had landed CP3. And immediately, Paul helped vault them near the top of the Western Conference playoff race, entering the 2012 playoffs as the fifth seed. And again, Paul’s winning ways revealed themselves in the postseason, as they dispatched the Memphis Grizzlies in seven games and very nearly advanced to the Western Conference Finals before an untimely Spurs comeback sent them packing in seven games. But again, in 2013, Paul helped lead the Clips to a 56-26 season, but they unfortunately drew a tough matchup in the first round against the Memphis Grizzlies, who exacted revenge from last season and beat them in six games. But in 2014, Paul again demonstrated his effect on the team’s record, as they began to set a standard of consistent postseason trips with a 57-25 record in 2013-14 and the third seed in the West. And after an impressive seven-game series win against the sixth-seeded Golden State Warriors, they were dispatched from the playoffs by a white-hot Kevin Durant and the OKC Thunder in six games. I’m making my LA Clippers paragraph pretty lengthy here, but just know that over the next three seasons, the Clips made the postseason every single time, and they advanced to the Western Conference Semifinals once again in 2015. And even if Paul hadn’t had as much playoff success with LA as he did in the regular season, it cannot be denied that Paul transformed the value of the Clippers franchise, and his efforts were, in part, what made superstars more willing to give the Clips a chance when deciding on a new basketball home.

And when the sun rose on the morning of June 28, 2017, Chris Paul likely did not know that a new chapter in the book of his storied career was going to be written on that day. On that day, he was traded to the Houston Rockets in exchange for Lou Williams, Patrick Beverley, Sam Dekker, Montrezl Harrell, DeAndre Liggins, Darrun Hilliard, Kyle Wiltjer, a first-round pick, and some cash. Paul’s presence finally let superstar shooting guard James Harden not be on the ball quite as much and let Paul do some of the scoring offensively, although it was questioned how well two ball-dominant guards would mesh with each other. However, Paul and Harden put that uncertainty to rest quickly in 2017-18, as they won game after game and steamrolled their way through contender after contender en route to a 65-17 record. And again, I have to point out the Chris Paul effect playing out here: just for context, the Rockets’ record in 2016-17 was 55-27; not bad at all, but good for only third in the Western Conference. But with the arrival of Paul, Houston saw a ten-win improvement and a first-place spot both in the Western Conference and in the NBA. And if not for an untimely injury to Paul’s hamstring in the Western Conference Finals that year, they very well could have beaten the juggernaut Warriors and advanced to Paul’s first NBA Finals in his career up to that point. But, it was not meant to be. And while critics of Paul and the CP3 effect will point to the disappointing 2018-19 season, Paul’s last one in Houston, as an example of the Chris Paul effect not working, I point to the fact that Houston lost a ton of key rotation players from the 65-win team a season ago. But with the end of the 2019 season, Paul’s swan song with the Rockets was written, as Houston desired a younger and more athletic upgrade at point guard for the 2019-20 season.

Prior to said season, CP3 was traded to the Oklahoma City Thunder for Russell Westbrook, and when the trade first went down, it was expected that the Thunder, who were supposed to be approaching a rebuilding phase, would trade Paul soon after for some first and second-round picks. However, not one team was willing to take on that rich contract of his, and soon he found himself stuck in OKC. However, this turned out to be a blessing in disguise, as the Thunder, who settled for the sixth seed last season, were led to a 44-28 record by Paul and his supporting cast and a finish that was good enough for second in the division, only two games behind the Denver Nuggets, and fifth in the Western Conference. They drew a tough first-round matchup against, wouldn’t you know it, the Houston Rockets and fell in seven games. They very well could have won if their coaching staff actually knew how to draw up innovative plays in Games 6 and 7. But this speaks to the winning mentality and the no-tanking mentality that Paul brings: this team was supposed to be the likely bottom-dwellers in their division and one of the worst teams in the conference when the season began because that’s how rebuilding is supposed to work! Paul brought his playoff experience, his winning mentality, his exceptional passing IQ, and his unquestioned clutch gene to the Thunder, and he helped them win when the whole league said they weren’t supposed to.

This season has been, in my view, the season where the CP3 effect has shown up the most and been the most effective. Coming off an impressive 8-0 run in the NBA Bubble last year, the Suns were a young and hungry team on the rise looking to prove themselves against the West’s best. But what they really needed was that final piece to the puzzle. A player that could take over essentially whenever he wanted. A player that would lead this young team to true elite status. A winner. Someone with an unquestioned clutch gene and drive to perform in the game’s biggest moments. See where I’m going with this, don’t you?

And in fact the Suns got their man, sending Ricky Rubio, Kelly Oubre Jr., Ty Jerome, Jalen Lecque, and a 2022 protected first-round pick to the Thunder for Paul and teammate Abdel Nader. And the Suns went from a 34-39 finish in the 2020 season to a 51-21 finish in the 2021 season, their highest win total in a season since the 2004-05 season, when they notched 62 wins and the top spot in the Western Conference. This year they earned the second seed in their conference, but after Paul tied a playoff career-high with 41 points to go along with eight assists in a series-clinching Game 6 win over the Los Angeles Clippers in the Western Conference Finals, the effect of Chris Paul on this Suns team was no longer doubted by anyone. For Paul to come in and do what he did is absolutely remarkable, and it speaks to the difference one player can make on a team. I’m going to relate this Suns team to the 2018-19 title-winning Toronto Raptors. Of course, we’re all familiar with the trade that sent Kawhi Leonard to Toronto and former franchise icon DeMar DeRozan on a plane bound for San Antonio. Toronto found that they could not achieve their ultimate goal, a championship, with DeRozan on the roster. So they swung for the fences and managed to acquire Leonard.

And the rest is history.

And it’s the same way with this Phoenix team: the front office found they could not compete for a championship with the current core they had around franchise star Devin Booker. So they swung for the fences and managed to get Paul to come to the Valley of the Sun. And now the Suns, with the position they are in, have to be thinking to themselves:

That’s one heck of a slam dunk.