More
JesuitRoundup.org is brought to you by:
Home Featured Science in Motion 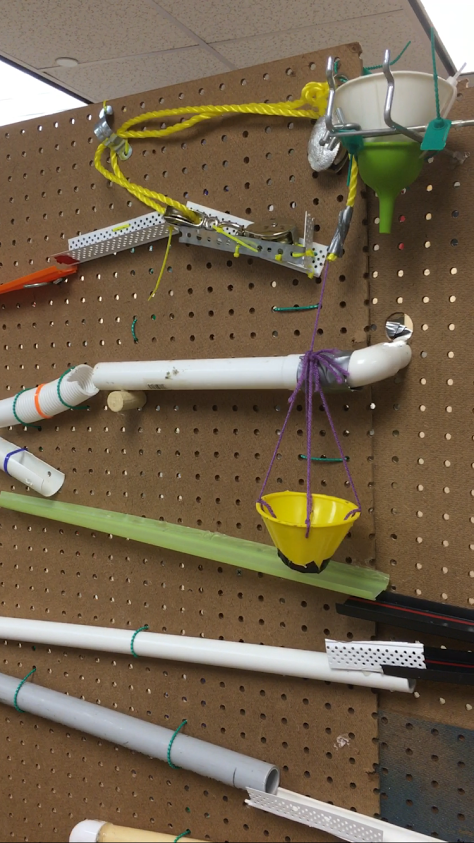 The tall young man fully extends his right arm to the top of the brown pegboard, stabilized by four large brackets to the base of the machine. As he reaches full extension, still shorter than the peg board, the student tenses his right calf, straightens his right ankle by stiffening his toes and rotates on the ball of his right foot to gain that extra two inches of height. Once at the top of the machine, he relieves the pressure on the marble which remains squeezed in between his thumb and index finger. The marble drops to the track with a thud and a feeling of anxiety rushes through the student as he awaits the test of his Rube Goldberg machine. Physics does the rest.

The junior year Physics project is named after an American cartoonist, Rube Goldberg, who was best known for his outrageous machines that he would draw and incorporate into his cartoons. These machines would look very complex, wacky, and flamboyant; however, they would be used to complete a very simple task. For example, in the introduction scene to the TV series Wallace and Gromit, Wallace uses a Rube Goldberg Machine to crack, cook, and serve his eggs at the breakfast table every morning. The machine uses simple machines, such as levers, pulleys, wheels and axles, and inclined planes in order to achieve these simple tasks. Each year, the regulars physics classes attempt to complete a task given to them by the teachers using multiple formulas, logic, and teamwork skills that had been previously learned earlier in the year.

The task for each class will vary in order to encompass more or less of a certain concept that the teachers seem to highlight for that year. Mr. Kwiek, a new physics teacher this year, says “It is necessary to revamp or change the project each year to be more inclusive of the mathematical components and course curriculum.” This year, the regular physics teachers tasked the junior class, in groups of four, with launching a ping-pong ball at least one foot into the air. The directions read, “Your task is to design a complex machine that can load and launch a ball straight up from a spring in as close to one minute as possible with only the release of a marble. In addition, your machine must include an electrical component that is triggered and alerts the viewers when the ball is ready to launch. ”

However, like all good school projects, there are requirements that must be met to include specific curriculum from the school year. Each group’s Rube Goldberg machine must include three calculated energy transfers and three simple machines which must be used for mechanical advantage. Another huge proponent of the project is that the majority of the wood, tubes, PVC pipe, screws, nails, marble tracks, and random toys that are used in the project are all reused from the previous year for the next class. Also, the entire project must be completed at school within the two and a half week deadline.

The building of the project teaches the students many lessons about teamwork, responsibility, how to use tools, and think outside the box in some instances. Mr. Kweik said that “The project is a difficult task; that is a fact. However, the project introduces students to many real-life experiences such as working with a group, trying to work within limitations and still meeting requirements, and overcoming complications. One beautiful thing about the project is that it introduces the students to power tools who may not have used one prior to this project. This also gave them the time and experience to learn how to use it properly.”

David Morgado, a junior student in physics this year, said, “Going into the project, I knew it was going to be very challenging and I was very concerned with how our group dynamic would mesh.” However, David’s worries did not stop there, as he had to switch groups due to circumstances out of his control. “I had not even talked to the new group members about their design. I had no idea what they were attempting to accomplish and the path that they wanted to take to get there.” Through the hard work of David’s group, they persevered through the changes. The group even came in on a weekend to work on the project together.

Each year, two awards can be given to the group of students who either come the closest to the one minute mark and another award can be presented to the group who designed the best machine meeting all the requirements. The machines are judged on by the physics teachers and guest teachers who will look over the project’s design and time to best decide who is deserving of the award. This year, however, no award was given for best time because many of the groups decided to focus less on the time requirement and more on attempting to get their machine to function. Therefore, no group came close enough to the time length of one minute to earn the award.

However, in the category of best design, one group of four young men achieved this award.
Griffin Boisbrun, Hunter Courtney, Adam Kissee and Hayden Kissee all participated in an outstanding group dynamic to complete their machine and achieve their goal. Congratulations to this group of students.

The Class of 2017 learned to perserve through stress, uncontrollable events, and limited time restraints to complete the Rube Goldberg assignments on time. This wraps up another fun and outstanding experience for the juniors as they prepare for senior year.