More
JesuitRoundup.org is brought to you by:
Home Academics Science Rube Goldberg- A Jesuit Tradition 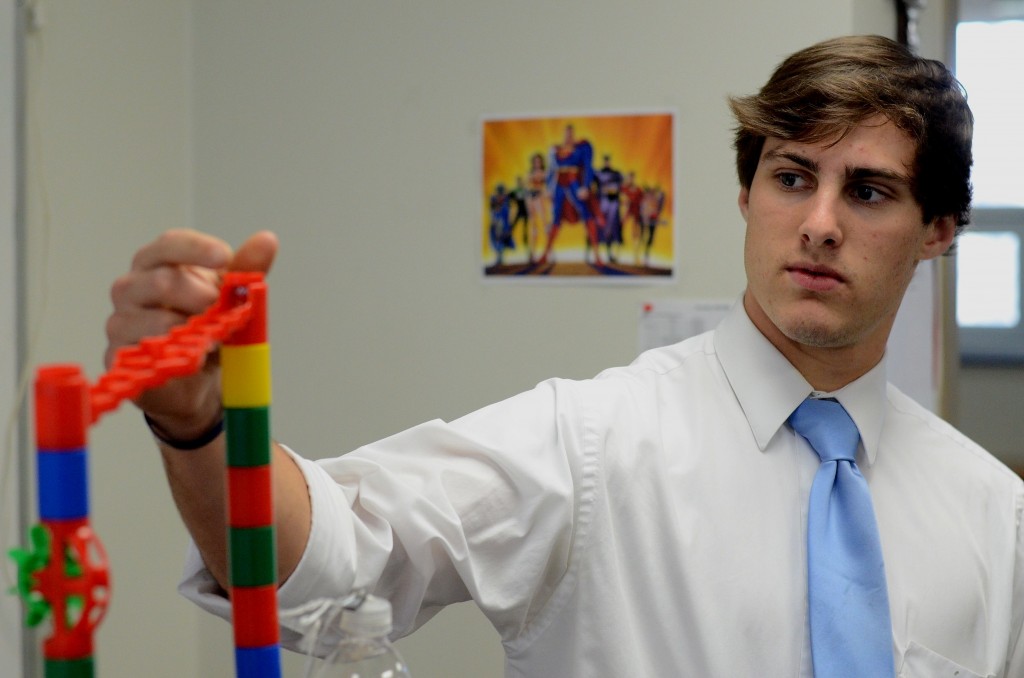 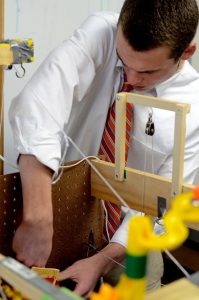 Every year, the junior class- at least, the ones in the regular physics class- get ready to construct a daunting challenge: a Rube Goldberg machine. The rules are relatively simple: one can use any tools to build the Rube Goldberg, it must be built only at school, and as Ms. Clayton told her class, the “Engineer Daddies” can’t build it for you.

The task of the project included securing, raising, and waving a flag through a series of steps starting with the releasing of a marble.  Students had to incorporate four simple machines for full credit, and they could choose from pulleys, incline planes, screws, levers, wheel and axels, and wedges.  The most popular of these choices was incline planes, which allowed a team to waste a substantial amount of time, inching them nearer to the goal of a one minute run-time.

The Rube Goldberg has a complex grading criteria, ranging from the four required simple machines being “a functional, integral part of the design and used in a unique way” for full marks to the originality and attractiveness of the project. 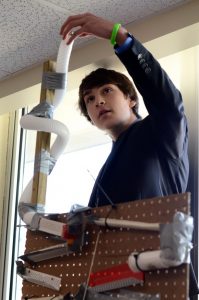 Extra credit was also a factor in the project, one that many teams relied on. The extra credit list was long, from turning on songs to the theme of the project, and even connecting a circuit gave points. One of the biggest extra point earners for the students was the two competitions at the end of the project, when all the machines had been graded.

The lucky students would be notified the day after the project deadline that they were chosen and had a few more days to refine any of the processes on their Rube Goldberg, and the unlucky ones would disassemble their projects and possibly donate any items they bought for extra credit added to their lab report.

The finalists were chosen for two different categories: the best time, and the best design. The best time would go to the team whose Rube Goldberg machine would run and end the closest to one minute, and the best design would go to the team who had the most well thought out and creative design. All the finalists would run the machine through one more time for the judges before being told whether or not they had won, or would even be disassembling their machines. 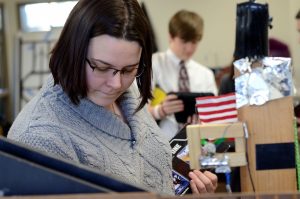 “The process of building a Rube Goldberg is tedious,” explained Alex Curry ’14. He stressed that teamwork is the most important factor, and that the members have to be flexible in what direction the team takes for building the project. “You have to get everyone to cooperate, and then get your priorities straight,” Curry says, “a big problem with my group was priorities, as we focused the building around a theme. This lead to us only having two simple machines with two days to go before the deadline, and we scrambled to get some more simple machines that were relatively creative incorporated into the design.”

Because of the rushed finish, Curry and his team’s project was very quick- just under 10 seconds. “The time constraint that was given to us really hurt the group because the entire group was almost never together, because two of us were in the third period class, the other three were in the fifth period class, and most of us always had an extracurricular after school” said Luke Curran ’14. It was very creative though, as almost all of the simple machines received full marks and the project was very original and attractive.

The Rube Goldberg project represents one of many Jesuit academic traditions that act as almost a writ of passage into the Jesuit brotherhood.  Now that this year’s junior class has completed this project, they can say that they have finished Jesuit’s two most famous science projects (including the bug project).  As time passes, one can only speculate how this project will change in the future, as it has already changed so much from its origins.