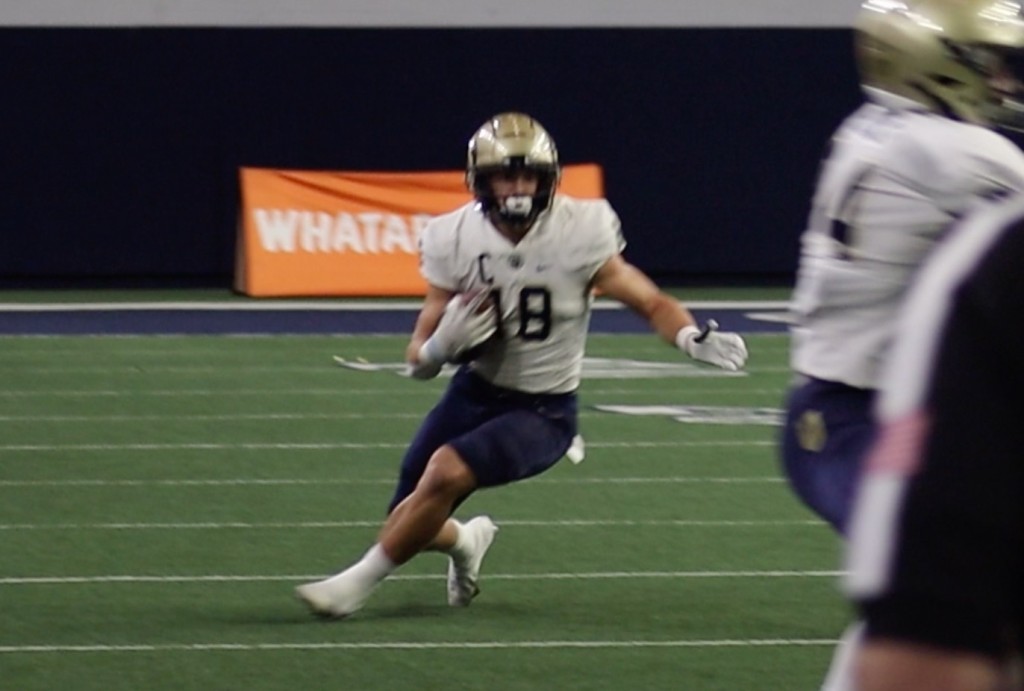 By winning their final two district games and going undefeated in district play for the entire season, Jesuit’s varsity football team qualified for the playoffs, a familiar sight for a team that has been so dominant over the course of so many years. Their first opponent in the postseason was a fairly familiar foe in Arlington, who Jesuit had faced in the playoffs a couple of different times before. But I’m kind of rambling in the intro here, let’s actually get into the games themselves.

Round One: vs Arlington

Jesuit’s first playoff game of the 2021-22 season was against Arlington, and as the game kicked off, Jesuit wasted no time in striking first, as a 22-yard run by superstar senior Robert Fitzgerald ’22 gave the Rangers an early 7-0 lead. However, Arlington matched the score with one of their own on the very next possession, as they marched all the way down the field and capped off an efficient drive with a 4-yard score. However, Fitzgerald took matters into his own hands again, as he and quarterback Gage Roy ’22 helped march the Ranger offense down the field and capped the drive off with an 8-yard plunge into the end zone. And after the defense forced a 3-and-out, Jesuit got the ball back and junior Jake Musso ’23 exploded for a 58-yard run to extend the Rangers’ lead. However, Cade Jordan’s PAT attempt was blocked and returned by the Arlington defense for two points, cutting into Jesuit’s lead entering the second quarter. And speaking of which, Musso responded to the blocked PAT attempt by breaking off a massive 66-yard run to extend Jesuit’s lead to 27-9 in the second period. And after the defense forced another three-and-out for the Arlington offense, Fitzgerald capped off the half with a 23-yard touchdown to extend the Rangers’ lead even further heading into halftime.

In the second half, Arlington came out with a bang, as quarterback and receiver connected on a 53-yard bomb to cut into the Rangers’ lead a little bit on the first possession of the second half. However, Jesuit put a stop to any comeback hopes about four minutes later, as Gage Roy marched the offense down the field against a helpless Colt defense and Robert Fitzgerald punched it in from 9 yards out to give Jesuit a 41-16 lead.

And a little over a minute later, Jake Musso got back in on the action, catching a 50-yard touchdown pass from Roy to add yet another touchdown onto the Rangers’ total. But Arlington had a little fun of their own to end the quarter, as they got just outside of the red zone and connected on a well-executed 22-yard pass in the end zone for a score. And heading into the final quarter, one would think that Jesuit would have this one wrapped up.

But the Rangers decided they were not done yet, as Fitzgerald bullied his way into the end zone for 6 from a yard out on the opening drive for Jesuit and then Reed Pffafenberger ’23 ran it in from 15 yards to give Jesuit a total of 62 points for the game. And after a garbage-time Colts touchdown, backup quarterback Charlie Schmidt ’23 delivered the final dagger in Arlington’s coffin with a 1-yard touchdown run that gave Jesuit an utterly dominant 69-36 win. With the victory, they moved on to the Area Round to face off against No. 9 ranked Denton Guyer.

Round Two: vs Denton Guyer

This showdown with Denton Guyer was no walk in the park for the Rangers, and they knew that coming in.

When it came time to execute in the real game? Well….

The game did not get off to the greatest start, as you could probably tell by the way I formatted that opening sentence, as Guyer came out and proceeded to drop 21 unanswered points on the Rangers to start the game. But then a glimmer of promise was shown, as quarterback Gage Roy hit who else but Hunter Krepp for a 75-yard touchdown bomb to cut into Guyer’s lead.

However, that is the maximum supply of good things that would happen for Jesuit that night.

Guyer promptly responded to the lone Jesuit touchdown by connecting on a 46-yard touchdown pass and going into the second quarter with a 28-7 lead. And, if you’re counting at home, that means that Guyer scored four touchdowns on our Rangers in the first freakin’ quarter! And in that second quarter, it was really more of the same, as Guyer scored two touchdowns in the span of about one game minute.

But for the rest of the quarter, there was really no scoring by either side until Guyer landed another blow on the Rangers, scoring on a 1-yard run that put Guyer up 49-7 going into the halftime break. In the third quarter, Jesuit’s tombstone was all but written for this season, as Denton Guyer put the dagger in the throat with a 34-yard touchdown connection to go up 56-7 on Jesuit and end the Rangers’ still-stellar 2021 season.

My Final Thoughts on the Year

Great season, for offense and defense and special teams, the whole team, in fact. That’s really all I have to say. I knew that the team had a pretty solid chance to beat up on Arlington, and I wasn’t exactly surprised when I saw that happen. However, when I saw who the team was playing next, that’s when I realized that we were not going to do so hot against the #9 ranked team in the state. I mean, did you see what Rockwall did to us in our second game of the season? I’ve already said what I wanted to say about that one, but I’m not trying to take away from all that they accomplished this year. It was a really great season in my opinion. I think everyone on that team, all the players and coaches, did a fantastic job, regardless of the final result.

Well, that’s it for this piece, but stay tuned to The Roundup for more Jesuit football and sports news!