More
JesuitRoundup.org is brought to you by:
Home Sports Wrestling Real Wrestling: The Jesuit Ranger Camp of Champs 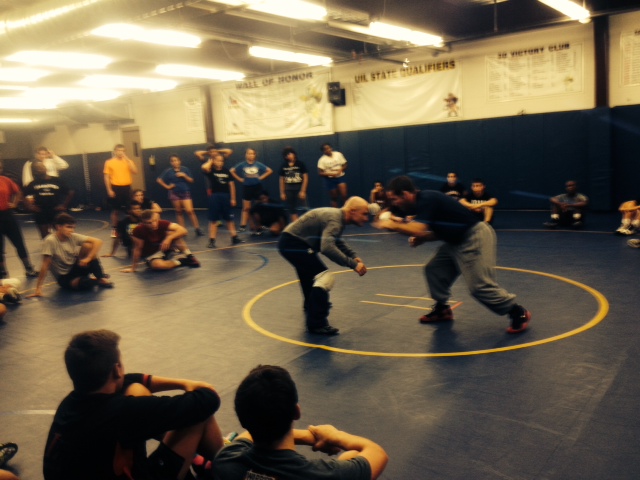 Competitive high school wrestling bears little resemblance to late night bouts on television.  Head Coach Ryan Menard of the Jesuit wrestling team stated, “for people who aren’t familiar [with wrestling], there is this notion that [wrestlers] jump off top ropes and body slam.” Obviously, this inaccurate perception of wrestling comes from the professional wrestling world of WWE. Continuing on the contrary, Coach Menard clarified that in reality, “there are several techniques and positions that are involved in the sport.” The perfect place to learn these techniques and positions was at the Jesuit Ranger Camp of Champs.

The Jesuit Camp took place Aug. 4-7 for two hours each night on Jesuit’s campus. Anyone could participate, regardless of experience level, in addition to the current Jesuit wrestlers who all participated in the camp. Speaking on the camp, Coach Menard described, “The Jesuit Ranger Camp of Champs is an opportunity for people who have never wrestled before to come in and be exposed to the sport and those who are currently wrestling to continue to learn and get an opportunity to have good clinicians teach them.”

Speaking of good clinicians, the camp was led by a different person each night: Coach Menard, assistant coach of Jesuit wrestling Tony Brown, Kenny Halloran ’04, and Waymon May. A former Ranger, Halloran won a state championship for Jesuit in 2004 before going on to wrestle for the University of Michigan in college. With regards to Halloran, Menard said, “I was excited that he had an opportunity to work with some of our kids.” The final clinician, Waymon May, who previously wrestled for the University of Oklahoma, currently serves as the Colleyville Heritage High School head wrestling coach. 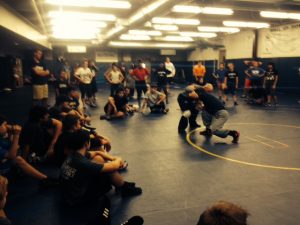 At the Jesuit Ranger Camp, wrestlers learned the general foundation of stance and movement before going into the more intricate techniques. When asked what the camp taught to the wrestlers, Coach Menard explained, “the seven basic positions, setups, penetration, lift, and finish.” The participants received a great opportunity to learn about wrestling in addition to actually practicing  techniques, positions, and movements.

Coach Menard looks forward to the upcoming wrestling season and also mentioned, “It’d be nice if wrestling got a little more exposure to generate some interest” in the sport. Reciting a little known statistic, Menard elaborated, “In high school participation, [wrestling] ranks fifth in male sports, but at Jesuit, I’m not so sure it represents the fifth most populated sport.”

Coach Menard hopes that Jesuit students will change that statistic in the future. Jesuit currently runs an open mat on Mondays and Wednesdays after school at 4 p.m. Menard encouraged, “anybody who has a remote interest, who would like to see or learn a little bit about wrestling, to come to the wrestling room and look in.” The wrestling room is on the bottom floor of the Terry Center. Coach Menard reinforced his invitation to all students as he said, “I would love to see some more guys participate.”