More
JesuitRoundup.org is brought to you by:
Home Sports Tennis Rangers Netters Pick Up Right Where They Left Off to Start Spring Season 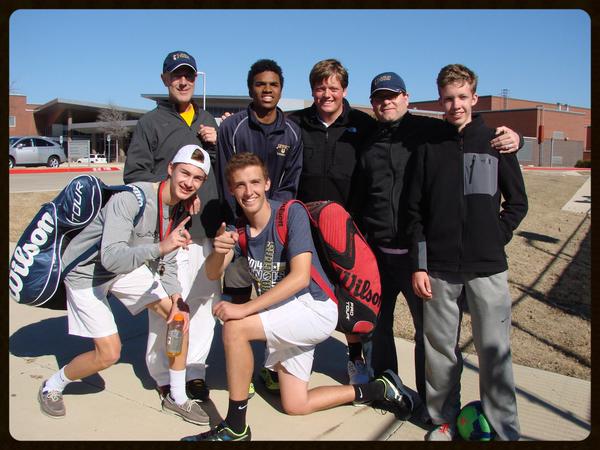 The Rangers tennis team kicked off the spring season with a bang, consistently advancing deep into both the Keller Indian Spring Invitational and the Coppell Valentine Tournament as the players returned from the winter hiatus.

Jesuit resumed tournament play on the weekend of January 16th in Keller. The newly-paired and dynamic duo of Campbell Frost ’16 and Hayden Kissee ’17 reached the semifinals of the Boys A Doubles bracket after being seeded third at the start of the tournament. The pair lost a tough match to a highly-ranked pair from Flower Mound Marcus, the defending champs, but didn’t let this phase them, as they came back to place third in the bracket, equaling their seeding.

Pierre Craig ’16, thanks to his stellar fall season in which he went undefeated, was seeded third in the Boys A Singles bracket to begin the year. He continued his dominance without missing a beat, controlling his opponents on the court and sweeping all of his matches en route to an appearance in the finals of the bracket. Unfortunately, he was unable to overcome Southlake Carroll’s Jason Smathers, who narrowly defeated him in three sets to take the title.

Pierre, although disappointed that he didn’t leave the tournament as the victor, viewed it as an overall positive experience providing him with the confidence necessary to win every match he plays and optimism for the upcoming season. “I believe reaching the finals of both of the two tournaments will help my confidence in the upcoming spring matches because I know I am capable of playing at a high level. I was disappointed I didn’t win the Keller tournament because I was up on my opponent and had a chance to do so, but didn’t. I believe I can keep this level of play up through the remainder of the season, and I expect to do so because I know can compete with some of the best players in the state.”

Head Coach Paul McDaniel praised Craig for his performance in the tournament, clarifying that “just being able to concentrate on singles for the past few months has allowed him to figure out what his strengths are. He’s certainly matured as a player.”

The following weekend, Jesuit competed in the Coppell Valentine Tournament for the eighth straight year. Although difficult to improve upon the performance at Keller, the team performed even better, finishing third in the overall standings despite not having any girls to bolster its total score, and winning the boys’ side. McDaniel called this feat “a big deal” because the tournament, a five-round tournament, is so large.

Much of the Rangers’ success was found on the Doubles side of the tournament. Continuing their torrid start, Frost and Kissee were able to come out on top of the A bracket, easily winning all five of their slated matches and even defeating the number-one-seeded team from Coppell quite handily in the process. Additionally, the duo of seniors Jackson White and Thomas Carrier won the division in the Boys B Doubles bracket, highlighting the Rangers’ array of deep talent.

Frost commented the strong relationship with his doubles partner that allows them to win matches: “Our chemistry as a doubles team is pretty much on point, we both balance each other’s emotions out on the court. I help keep him calm, and he helps keep me calm. We also give each other coaching tips during the match when either one of us makes an error in order to make temporary improvements/corrections in our strategy.”

This doubles success has also proved beneficial in practice. McDaniel described: “You know, when you’re on the court with them, you have to play at a certain level, so I think that it has particularly helped us in practices, the level of play has been higher… It’s made our practices better and crisper because both of those guys play so well.”

In Singles play, both Craig and Clark Shannon ’17 turned in admirable performances to help boost the squad into third place. In his first tournament on the big stage, Shannon advanced all the way to the semifinals in the A bracket before losing to eventual champion and NCAA Division 1 signee Dillon Pineda of Allen, while Craig once again reached the finals before also losing to Pineda. His string of finals appearances is certainly noteworthy and validates the previous claim.

McDaniel commented on the team’s solid performance to start off the season, explaining, “I feel like we are very much in midseason form… They’re still learning, and the more matches they play, it’s just gonna set them up better for this year and even more for next year.”

On Monday, February 9th, of the following week, the Varsity tennis team took on John Paul II High School. Freshmen John Lindberg and Chris Reynders performed well in their matches, while Marcelo Pier and Alex Giebler, also freshmen, provided an extra punch for Lindberg and Reynders, who were exhausted after participating in both tournaments. These performances emphasize depth of the squad this year, as the team can count on all of its members to step up rather than just relying on a couple stars to earn them victories. McDaniel expounded this point, saying, “We’ve had some unexpected injuries… so it’s allowed us to plug other people in without really feeling like the quality of play has fallen. It allows other players to come in and get some experience to play well and at least keep the level of play high.”

The team has high expectations for the season based upon its solid play so far. Frost offered some insight into the general attitude surrounding the year, saying, “We’re almost 6 deep in players who compete at the highest level of junior tennis competition, most of whom also practice outside of school. Even the JV team is incredibly strong throughout. Across the board we’ve been winning matches against the best schools, and a consecutive sweep of districts this year is highly probable. I see us going farther than just regionals this year as well, even more so next year, due to the amount of talent on our team.”

The Rangers’ next match will be against ESD on Tuesday, March 3rd. Come see if they can keep their momentum going!