More
JesuitRoundup.org is brought to you by:
Home Sports Ranger Track and Field Continues the Season at Area Meet 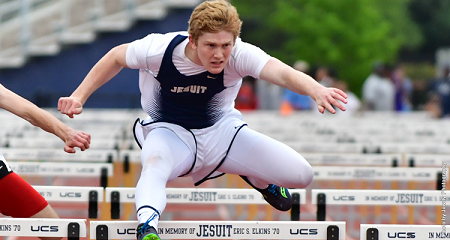 Ten athletes from the Jesuit track and field team competed at the UIL Area Meet at Williams Stadium in Garland on April 20th. These athletes qualified for this meet after placing in the top four in their respective events at the district 9-6A meet on April 11. As a team, the Rangers placed fifth out of a total of fourteen teams participating in the meet. Overall, the Rangers performed well against some of the toughest competition in the area, and five members from the team did enough to qualify for the regional meet.

Parker Towns ’18 finished second in the 300 meter hurdles, a very strong performance which was good enough to qualify him to continue his season at the regional meet.

Competing alongside Parker in the 300 meter hurdles was Will Naquin ’17, who finished sixth in that event. Will’s track career concluded at this meet, but he still had a positive experience at the meet, saying, “While I didn’t place well enough to run in the regional meet, it was still an exciting way to finish my track career.”

Will also competed in the 4×100 meter relay alongside classmates Connor Jackson and Jack Lynch, as well as Andrew Isbell ’18. The relay team met very stiff competition, as they finished eighth in the event and were unable to advance to regionals.

Isbell echoed the enthusiastic attitude of his teammates: “I’m glad that I was able to compete at the area meet, and even though we did not qualify for regionals, it was still good experience for next year.”

Connor Jackson also participated in the 100 meter dash in which he finished seventh.

Sophomores Wyatt Hummel and Collin Lark each were able to advance to the regional meet in their respective events. Hummel continued his streak of spectacular performances as he finished first in the discus, while Lark also performed extremely well, finishing second in the pole vault. These two athletes hope to continue their great success later on in their still early careers.

T. Buell ’18 competed in the triple jump, where he placed seventh with an admirable performance which he hopes to build on next season.

Vance Holub ’17 was the final Jesuit athlete to qualify for the regional meet, as he displayed his strength with a fourth place finish in the shot put. Holub also competed in the discus in which he finished in sixth, a solid performance, though not quite enough to advance to regionals.

The Jesuit track and field team’s performance at the area meet was filled with excellent performances from athletes competing against some of the finest talent in the surrounding area, and five Rangers were able to qualify for the regional meet: Connor O’Neill, Parker Towns, Wyatt Hummel, Collin Lark, and Vance Holub. These five athletes will look to continue their success at the Regional Meet, where they have a chance to qualify for the UIL state meet in Austin.