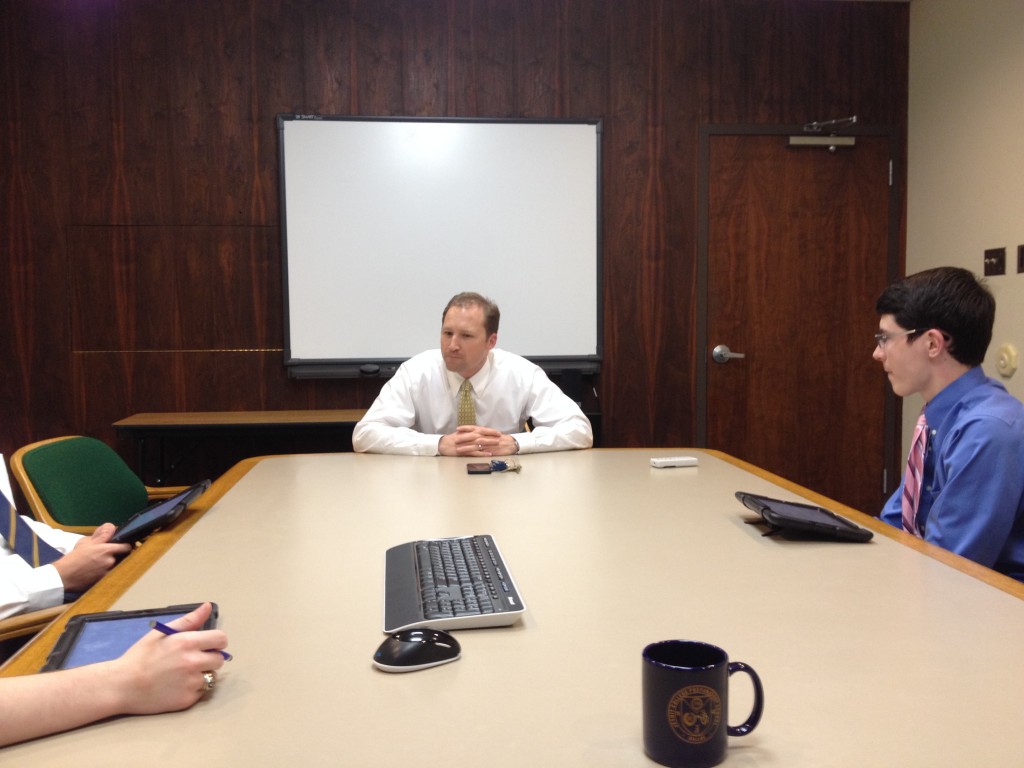 Recently, Jesuit’s The Roundup had the chance to sit down with principal Mr. Garrison. During the press conference, Mr. Garrison had only positive things to say about both the staff and the student body. This year is turning out to be truly amazing so far, and the administration really appreciates everything that the students and faculty are doing to make this year so great.

The student body this year has been exceptional. Mr. Garrison wanted to “thank all the students… [for] being great” and not causing any problems this year. With Mr. Kirby’s absence, there were some initial problems and some of the faculty and students really stepped up. Particularly, Mr. Donahue, Mr. Knize, Mr. Naughton, and the counselors have taken responsibility and addressed issues that might have previously been sent to Mr. Kirby. Their hard work and dedication make Jesuit the place that everyone loves so much.

To the football team, Mr. Garrison said that “it’s been a good, positive year,” citing the team’s positive attitude and outlook as a strong influence on the school. But his praise didn’t end with the players. “I really admire our coaching staff,” he said. The coaching staff really unites the players and sets the mood. Even if we had a bad game, the coaching staff and the players would still stay positive, and that really showed in the student body.

Jesuit has recently undergone a lot on construction. Recently, Jesuit built a new film lab full of professional grade recording and editing equipment. “The part I like the most about this I think is that the film, the content, that’s going to start coming out of this building is just going to become exponentially more and more, and I’m excited to see it get out there, and I’m also excited to see how the guys are learning to use it so quickly,” stated Mr. Garrison. To be blunt, Jesuit’s new equipment is simply better than any other school’s at this point, and that in combination with the great film program is starting to show in the videos produced. Over 100 students are now involved in theater or film production. The new updates provide these students with a way to express themselves and to hang out.

As for Jesuit’s current construction plans, unfortunately, the school does not have any immediate plans to construct new parking soon, but it is a goal for the future. The current project, the baseball field, is going to be beautiful. The plan is to hopefully have a see-through fence because “It [will open] the campus up and makes us more accessible” because people will be able to see Jesuit from Inwood.

In closing, Mr. Garrison had these words of thanks for the student body: “I want to just complement the students on the spirit of brotherhood and community. This is a place where you can just walk around and find pockets of friends. It’s all over the building. It’s very important about this place and it means a lot to me. It’s not forced; it’s just everyday life here.”  When students and parents tour the school, they often remark the sense of unity inherent in Jesuit life. The brotherhood and friendship so ingrained in Jesuit is a trait that many prospective students look for in a school, and it’s what truly separates Jesuit from the other high schools in the area.