More
JesuitRoundup.org is brought to you by:
Home Featured Powerlifting Pounds the Competition at Jesuit Invitational 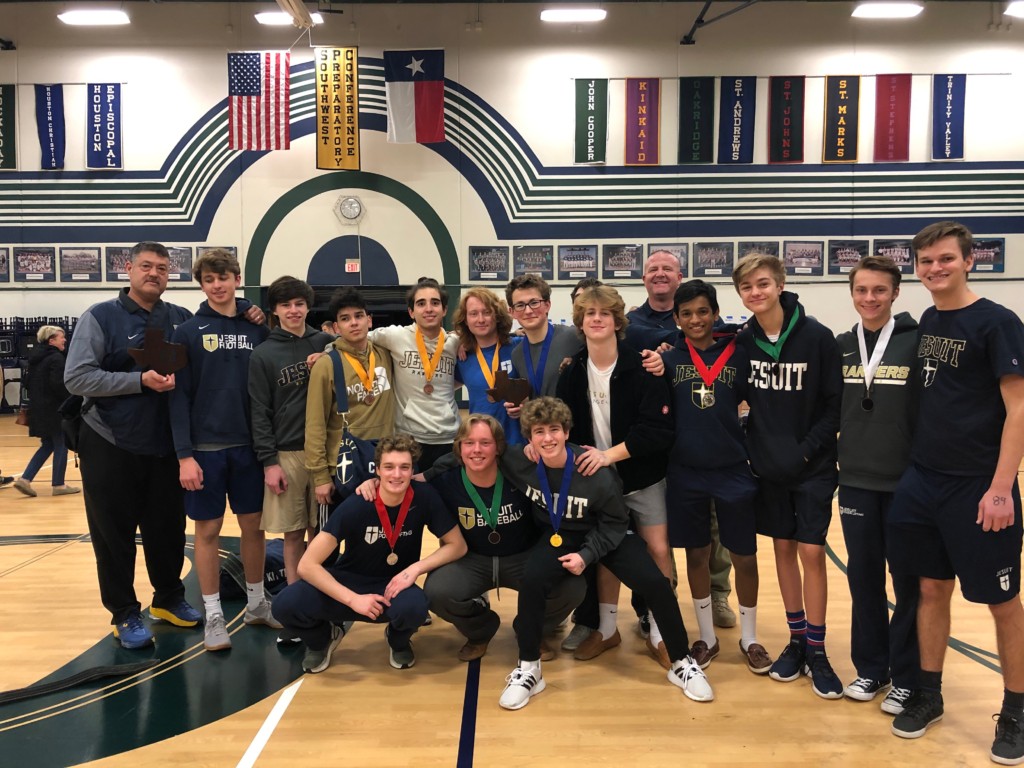 “BAR’S LOADED,” yelled the judge, staring at the 420 lbs laying right in front of him on the platform. After putting his belt on and grabbing chalk, senior Will Nickols ’20 aggressively walks up to the rack, preparing to unleash all his power. He places both his feet a few inches away from the Jesuit cross, shoelaces directly beneath the bar. He lowers his hips and reaches for the bar, ready to pull 420 lbs off the ground. He takes a few deep breaths, works to get his back straight, and… BOOM. He firmly pulls the bar up his legs, locking out his knees at the top while pushing his hips through the bar. Jesuit alumnus Emmet Halm ’19, ex-powerlifter, motivates Nickols, proudly smiling and clapping as he watches his good friend lift some big weight. “DOWN,” yells the judge shortly after, allowing Nickols to place the bar back on the ground, finishing his lift.

The lifters began the year by learning the basics of each lift: squat, bench press, and deadlift. They spent a full week on each lift at the beginning of the year to hone in their skills. Their program began mainly with volume exercises, aiming at building muscle strength, starting out with little weight and gradually adding more every week. Practicing three times a week, the new lifters were able to build a lot of muscle after the first month of training, exponentially increasing their strength. The older lifters took longer to add weight past their max, gaining strength slowly but steadily throughout the weeks. The program began to shift from volume to intensity several weeks before the meet, shifting the goal of the exercises from building muscle to increasing the lifter’s explosiveness.

After months of training in anticipation of competing, the powerlifting team looked forward towards Wednesday, their first powerlifting meet of the year. Their first meet was just around the corner, and some lifters were starting to look at the weight category they wanted to place in. Some lifters decided to cut weight, eating and drinking less to make a lighter weight class. Wednesday arrived relatively fast, and during their lunch periods the powerlifters went up to the weight room in order to weigh themselves in for the meet before eating their lunch. Right after school, they changed and went up to the weight room to warm up for their meet, practicing with no gear on. The meet started at about 5 and went till 10 at night. Some Jesuit students help out to speed up the pace. After a long day of lifting, everyone cleaned the weight room while the scores were being processed by the judges.

Many Jesuit lifters had outstanding performances at this meet, each receiving a medal for placing inside the top five of their weight category. There were four lifters who earned the gold medal for their respective weight category: Nickols, David Ritter ’20, Luke Sullivan ’21, and Ryan Fleming ’22. Three other lifters earned the silver medal for their respective weight category: Gabe DeConto ’20, Jackson Daniel ’20, and Ajay Bhavan ’22. Colin Kittleson ’21 came in third place and managed to earn the bronze medal for his weight category. The other honorable mentions who placed inside the top five are Becket Polma ’22 (4th place), Cande Narvales ’22 (4th place), and Weston Smith ’22 (5th place). With all of these amazing performances, the Jesuit Powerlifting Team placed second at the meet, falling behind only to Cedar Hill.

The second meet was just a few weeks later, getting to leave school early on Friday in order to prepare themselves for the Oakridge meet. The lifters left campus at about 1:30 pm, weighing themselves in once they got there and eating some meals right after. About half an hour before the meet began, the players began warming up, preserving as much of their energy as possible to use during the meet. This meet lasted longer than the last one since more lifters were competing. Jesuit brought two teams to this meet, allowing the younger lifters to gain more experience. Since there were more lifters competing, it was harder for lifters to place high.

Even though the team didn’t place first, Nickols managed to earn the Best Overall Lifter award at the meet, meaning he had the highest weight lifted to body weight ratio out of all the participants. This is probably the best award a lifter can receive at any meet, so it was pretty awesome that a fellow Jesuit brother was able to receive it, well deserved.

Stay tuned to The Roundup for more coverage on powerlifting!