More
JesuitRoundup.org is brought to you by:
Home Featured Powerlifting is Back! 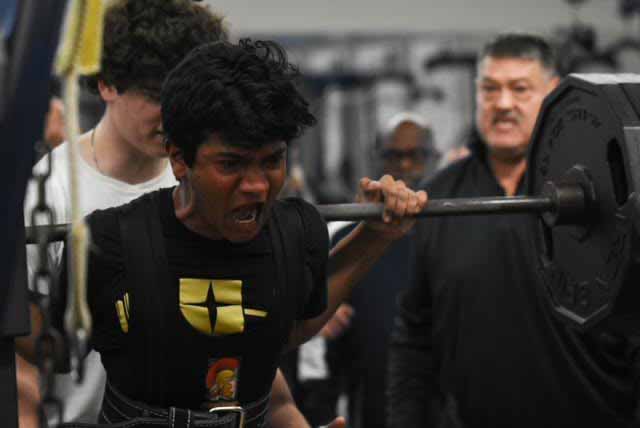 “BAR’S LOADED,” yells the judge. Senior Ryan Fleming stares at the 365 lb bar in front of him. Ryan, covered head-to-toe in chalk and compressed by a tight weightlifting suit, approaches the barbell, driving the iron into his shoulders. He lifts the bar off of the j-hooks, takes two steps backward, and braces every bone in his body for the lift. “SQUAT!” barks the judge. After a few deep breaths, he sinks to just below a 90-degree angle. Almost instantly after he hits full depth, Ryan launches back up as fast as he can, and freezes. “RACK,” screams the judge, permitting Ryan to drop the weight back on the catch rack, finishing his rep.

On February 9th in The Dell, Jesuit took on 3 teams from region 3 of THSPA: Coppell, Cedar Hill, and Crowley. Jesuit had been grinding their squats, benches, and deadlifts since August of 2021, so they were more than ready to hit some PRs.

Notable performances included Ajay Bhavan ’22,  who placed first in the 148 lb weight class. Ajay managed to squat a phenomenal 435 lbs, bench 205 lbs, and deadlift 430 lbs. Additionally, Senior Ryan Fleming placed first in the 123s, putting up an impressive 885 lbs total. Junior Christain Straffon dominated the 165 lb weight class with a 1035 lb total, including a 405 lb squat, 185 lb bench, and a 445 lb deadlift. The team placed 4th overall with 22 points accumulated, finishing behind Crowley in third with 27 points, Cedar Hill in second with 38 points, and Coppell in first with 50 points.

The full results to the Jesuit invitational can be found at http://www.thspa.us/meetdetail.aspx?passedDivisionID=5929

On February 19, the boys made an early morning trip down to Cedar Hill. The team weighed in at 8:00 AM; then the lifters were able to chow down on some PB&Js and Swedish Fish before the 8:45 start time.

6 hours later, Jesuit came out 5th overall, beating out 9 other teams for the spot. Given that Jesuit only consisted of about 6 lifters (as opposed to teams like Royce City 29 lifters), we were incredibly proud of our performance.

Notable performances included Straffon, who placed 1st in the 165 lb class with a 1065 lb total. Fleming managed to place 1st in the 123s with a 915 lb total, an impressive 30 lb increase from his previous performance. Finally, Bhavan protected his throne in the 148s, destroying his competition with an 1105 lb total.

The full results to the Longhorn invitational can be found at http://www.thspa.us/meetdetail.aspx?&passedDivisionID=6074

When a lifter manages to place top 12 in his region, they are permitted to compete in the regional meet on March 10th. Jesuit, who competes in region 3 division 1, is able to send 4 lifters to this year’s regionals, including Ajay Bhavan, Ryan Fleming, Christian Straffon, and Colin Scherp. If any of these lifters manages to finish top 2 in their weight class, they will be allowed to compete in the State meet. Being able to make states, which is comprised of the best high school lifters in Texas, is an honor in itself, and the team hopes to send lifters to represent Jesuit this year.

As a 3-year member of Jesuit Powerlifting, I have witnessed firsthand this team’s incredible progress despite a plethora of obstacles. Despite COVID eradicating our entire 2020-2021 season, and despite multiple coaches leaving our team, we’ve been able to bounce back succeed. Our team’s adversity impresses me, and I couldn’t be more proud to call myself a member.

If you have an interest in joining Jesuit’s powerlifting team, contact Coach Leal, Coach Sanchez, or either of the team’s captains: Ajay Bhavan ’22 and Ryan Fleming ’22.

Stay tuned to The Roundup for more powerlifting updates!