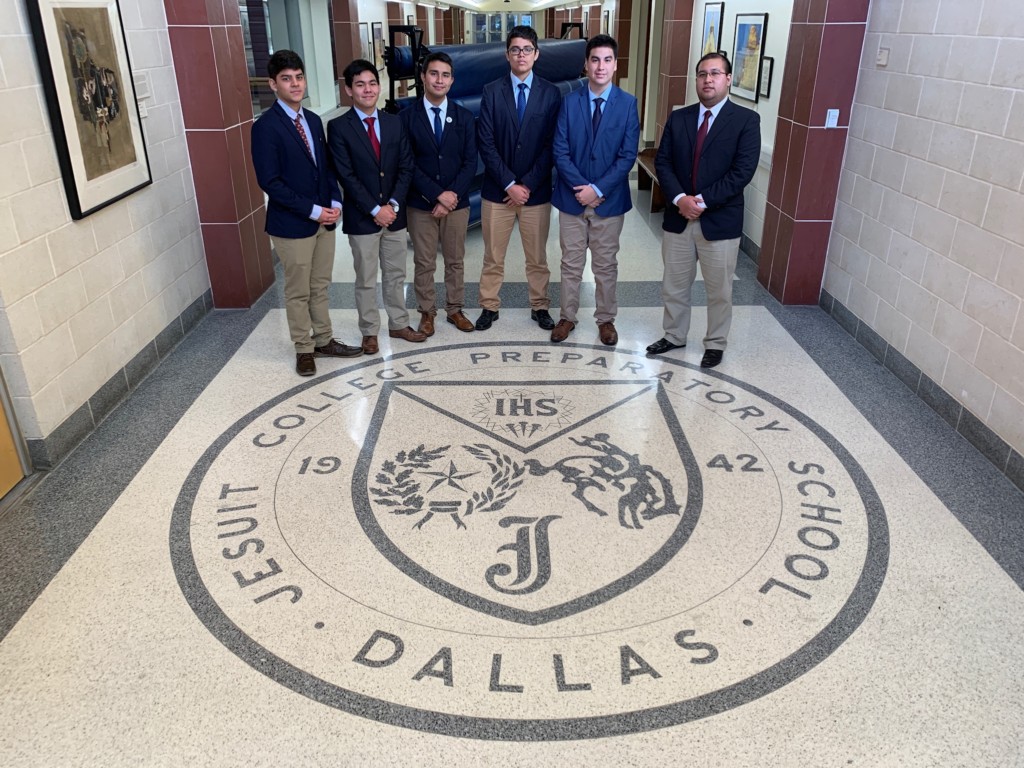 One of the unique characteristics of Jesuit Dallas and other Jesuit schools is its immersion into other cultures. Whether through a summer trip to China, Italy, or France, Jesuit students have many opportunities to experience foreign cultures. This also goes for the numerous Jesuit high schools scattered throughout the world.

From January 26 to February 9, five students from Colegio de La Inmaculada Jesuitas in Lima, Peru visited Jesuit Dallas, staying with families of current students. While they were here, the students were exposed to both American and Texan culture as well as Jesuit Dallas traditions. From attending rodeos to performing community service alongside their host brothers, the exchange students were able to take part in a truly unique experience.

While they were here, the Peruvian exchange students were exposed to many new and exciting activities they otherwise might not experience. Some notable activities the exchange students did while they were here was going to a Dallas Mavericks gave, the Fort Worth Stock Show and Rodeo, Chick Fil A, the Perot Museum, Dallas Museum of Art, and Dallas World Aquarium. The exchange students also got to see the flight museum at Dallas Love Field and also were given the unique opportunity to speak with an admissions counselor at the University of Dallas to get a taste of what college life is like inside the United States and what the process is like for foreign students to apply.

While the students were able to experience some of the noteworthy attractions in the Dallas/Fort Worth area, they also were able to experience the Jesuit mission in the United States. While they were here, the exchange students spent a day in late January at Minnie’s Food Pantry with their host brothers to allow them to feel what it is like to participate in service in the US.

Ms. Maggard, a Spanish teacher at Jesuit, was the primary faculty member that oversaw the day-to-day experience of the exchange students. Having a close connection with the program, she said that in her opinion, the exchange program with the Peruvian students has two main parts: the service and cultural sides. Ms. Maggard stated:

“Minnie’s Food Pantry on the community service side is really great because it is something the Peruvians are excited to do when they get here. They love to do it with their Jesuit brothers. It gives freshman as well the experience of shadowing seniors in a multifold perspective which is enriching and very valuable.” On the cultural side, Ms. Maggard added, “I really like taking them to Fort Worth. Not because it is something that is stereotypically Texan, but because so many people who live in DFW are not originally from Texas.”

In terms of the possible language barrier between the Peruvian students and those at Jesuit Dallas, especially host families, Ms. Maggard commented that “we have never had an issue with communication. I have to give props to Colegio de La Inmaculada Jesuitas because they require their students to test at a certain level with their English to be eligible for the trip.”

Ms. Maggard also thinks that the trip says a lot about Jesuit’s dedication to bridging cultures and bringing people together: “It says that Jesuit is about making connections. We want people to feel connected regardless of how many miles there are between each other. That is the experience that unites us.” She went on to add, “some exchange programs are about showboating what Dallas has to offer. Intentionally, I and the mission of our programs is to be authentic and keep it simple enough that you have the time to make those intimate connections. Don’t over-busy it.”

From a Host Brother’s Perspective

Morris explained: “I enjoyed hosting a foreign exchange student. Language is so often a barrier in our world today, but here he spoke great English and I was able to clearly understand him.” When asked about his favorite part, Morris said, “my favorite part was to watch his face during all the events; it was a mix of awe and wonder.” He concluded by saying, “having somebody follow you around for two weeks can be a challenge and somewhat tiresome; however, through an investment in these programs, Jesuit presents a goal of unity not only individually or within our country, but internationally. Overall, it was a great experience, and I learned a lot about the Peruvian culture and about my exchange student.”

Davis also commented on his experience: “The overall experience was exemplary. My Spanish-speaking skills immediately improved and I got to learn more about his life such as his family, his friends, and his life in general. We got to have fun activities and I think he enjoyed it just as much as I did. I would highly recommend being a host.”

Stay tuned to The Roundup for more on Jesuit exchange and immersion programs!