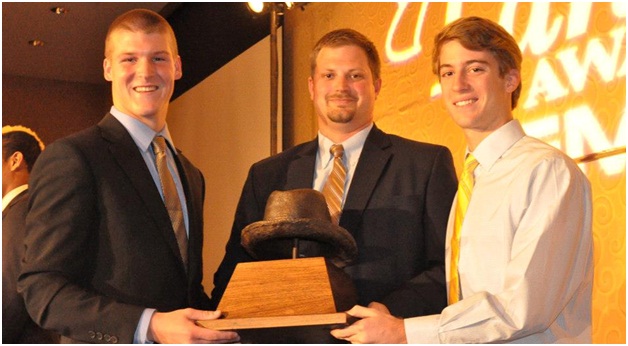 The Landry Award is named after the late Dallas Cowboys coach Tom Landry, a Hall-of-Famer who led the Cowboys to five Super Bowls and 270 wins in 29 seasons at the helm.  Landry was known “as a man of strong faith” that “encouraged his players to demonstrate leadership” every day.  Fashioned after the coach’s signature fedora, the trophy represents all that is great about football in Dallas.

Oddly enough, the presenter of the coveted award was Babe Laufenberg, former QB for the Dallas Cowboys and father of current Jesuit QB Joe Willie Laufenberg ’13.  Nonetheless, this was not an influence on Jake’s candidacy for the award.

Presented by GMC, the award ceremony was broadcasted live on CBS.  Throughout the hour-long special, each player was depicted and profiled to exhibit their success on the football field, in the classroom, and in their respective communities.

When time came for the award to be presented to only one of the five outstanding nominees, Babe Laufenberg had them swear to an oath of “honor, dignity, and pride” and jokingly, “to Babe Laufenberg and TXA 21 (the station he anchors for).”  Nevertheless, his oath demanded the athletes to stay humble in all their endeavors and wished them success in the future.  Prior to reading the name inside of the envelope, two-time winner, RB Jonathan Gray (Aledo High School/ University of Texas) was called up to name the 2012 recipient.

As soon as Gray’s lips uttered the name “Jake Oliver”, the room erupted in applause and joy for the receiver.

At the stage, Oliver reacted humbly, but happily, exclaiming, “It feels awesome; I was lucky enough to be a finalist last year, [and] I’m overjoyed to be here.  [I’m] glad to be named with some of the best in Texas.”  He was also asked to reflect on his career as a whole, to which he replied, “It’s crazy to think about when I look back on it.”  All throughout his four years at Jesuit, even in key games such as Senior Night against Lake Highlands where “[the receptions record] was kinda in the back of [his] mind, [he] was set on winning the football game[s].”

Coach Brandon Hickman also added some insight into the honor up on the stage with his franchise-caliber receiver, saying “everyone can count on him.”  Hickman has been with Jake since his sophomore year.  Oliver has learned a lot from him, and vice-versa, as “Jake is a guy we’re really going to miss.”  All in all, the award, which will be displayed in the trophy case at Jesuit, “is a huge accomplishment for Jake and [the Jesuit football] program.”

In addition to hauling in some gold for the trophy case, Jake Oliver played in the 2012 U.S. Army All-American Bowl on Saturday, January 5, 2013 at the Alamodome in San Antonio.  The bowl is sponsored by the U.S. Army and features the best 90 players in a classic East vs. West match-up.

The game was played on a Saturday, and Jake reported to San Antonio during the week for practices, meetings with teammates and coaches, and other activities. Throughout the week, his activities varied from signing 2,000 trading cards to meeting current servicemen in the military.

On Saturday, Jake, clad in yellow jerseys and camouflage pants, lined up against the East Squad, and while the West fell to the East 15-8, his athleticism and football IQ shone bright.  Jake ended the game with no catches, but on multiple occasions, he was wide-open and overthrown by the quarterback.  He was the wide-open target in the end zone on a potential game-tying touchdown, but the passer wasn’t able to get the ball in the hands of Jesuit’s former pride and joy.

After the game, Jake (@joliver_6) tweeted, “So thankful for being a part of the @ArmyAllAmericanBowl, and also thankful for what our troops do for us #blessed”

Everyone here at the Jesuit Roundup wishes our best to one of the greatest football players in the history of Jesuit Ranger Football!