More
JesuitRoundup.org is brought to you by:
Home Featured Nuts and Bolts 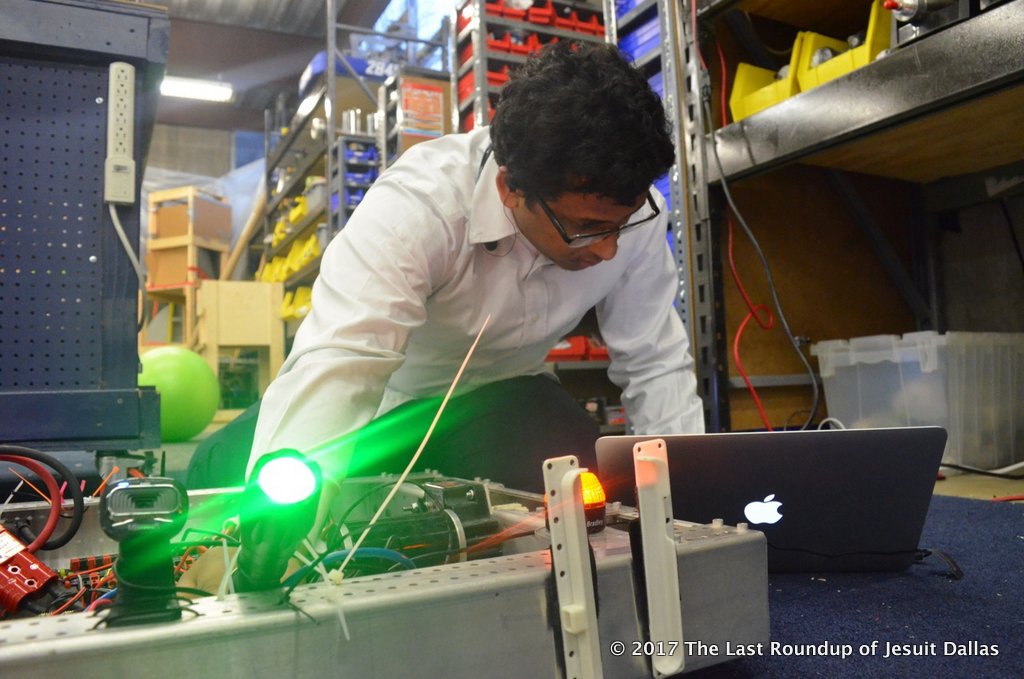 In the seldom-visited bottom floor of the Terry Center, home to the thudding mats of the wrestling room and symphonic music of the band, a workshop bustling with whirring machines and spare parts comes to life after school. This is the Jesuit robotics lab, where the Rangers’ extensive robotics program develops engineering, science, and technology skills in students through a variety of programs and competitions.

The Jesuit robotics team, nicknamed “The All Sparks,” had a busy summer, completing two major off season tournaments. From June 30 through July 1, Jesuit robotics stayed in Houston to participate in the Texas robotics invitational (TRI). From July 28-29, Jesuit Competed at the Texas Robot Roundup (TRR), competing among 24 other teams to take first place (along with two other teams) in the challenge.

According to Noah Santoni ’19, winning an off-season competition is “something [the All Sparks] have been wanting to do for a long time to show that [they’re] a big, prominent team in the region.”

These events, though they do not affect in-season rankings, help rookie team members and veterans alike train, gaining valuable experience, whether it be building the robot or completing a challenge in the field.

Jesuit Robotics also offered a freshman boot camp over the summer during the first full week before school began: August 7-11 from 1-5 pm. During the camp, 21 interested freshman learned the basic processes, game tactics, and software involved in the creation of a functioning robot in the ring. During the camp, they split into teams, each team building its own bot that would go on to compete in a tournament on Friday.

In addition, The All Sparks completed a group service project on August 19th. The project “Feed My Starving Children,” connects volunteers and supplies across the United States to severely malnourished children, and children who are threatened with death from starvation all around the world. Roughly 20 Jesuit robotics members volunteered to pack food and pray over meals before their shipment, working along with hundreds of other volunteers to package and send thousands of meals to those in need.

The summer off-season is now over, but with Junior Noah Santoni and Senior John Barone in the student leadership positions, the robotics team has a bright season ahead of them. According to Santoni, “[the summer season] went really well. We had a lot of interest generated in the program by the camp, interest meeting, and activities fair, and the incoming freshmen really […] learned a lot. We have definitely made an improvement from last year, and we plan to continue growing.”

Looking forward, the robotics team has only a small amount of time before the game is revealed later this September, so be sure to wish your Jesuit All Sparks good luck as they work to build the perfect problem-solving machine!