More
JesuitRoundup.org is brought to you by:
Home Viewpoint Culture Nice Try Neil Young, but We Like Rogan more- 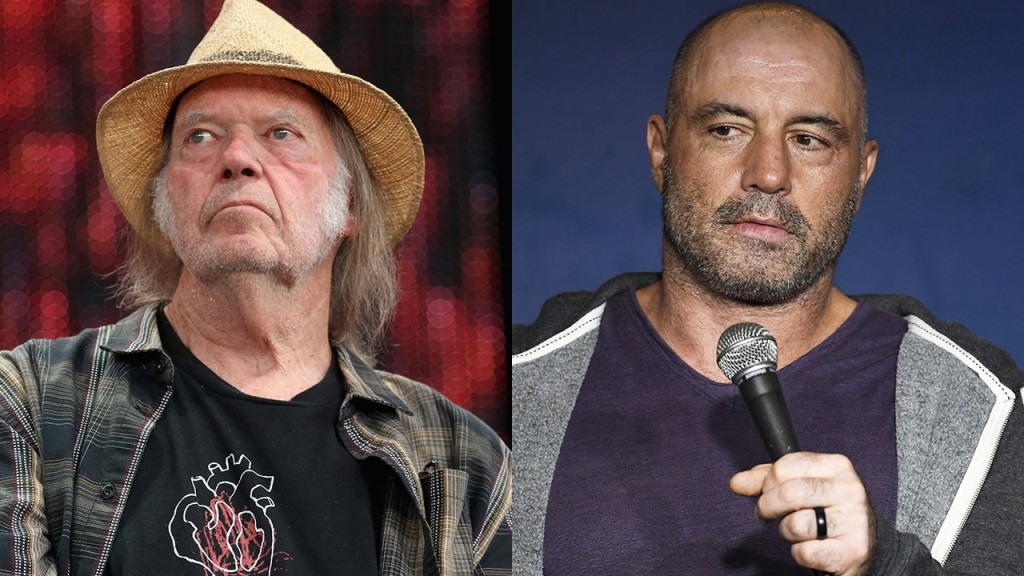 Neil Young hasn’t hit the headlines in quite awhile, but he got his short-lived moment after making some confrontational claims against Rogan and Spotify.

Neil Young expressed his outrage with Joe Rogan’s criticism of COVID-19 vaccines, among many other COVID-19 related matters. In Young’s own words, he protests “because Spotify is spreading fake information about vaccines – potentially causing death to those who believe the misinformation about them.”

For example, Joe Rogan’s guests have claimed “you can’t get [the coronavirus] twice” and “the virus is not spread asymptomatically.”

Young’s greatest threat occurred shortly after: “[Spotify] can have Rogan or Young. Not both,” he said.

“They can have [Joe] Rogan or Young,” Neil Young wrote in a letter to his manager and label, “Not both." Young demands Spotify remove his music over "false information about vaccines" https://t.co/f1u4bDAu1L

Many conservative podcasters, YouTubers, and talk-show hosts quickly called the confrontation the silencing of anyone who dissents with CDC and WHO guidelines. Ironically, this household name, who has advocated for “rockin’ in the free world” and limiting government outreach, is not concerned about the attempt to de-platform Rogan and suppress free speech.

Some political commentators, like Michael Knowles and Ben Shapiro, believe this is a leftist attempt to expel Rogan from the podcasting scene altogether.  Because Rogan has hosted figures unfavorable to the political left, including Jordan Peterson, Ben Shapiro, and Dr. Robert Malone, and Rogan himself has questioned the legitimacy of gender ideology and large government spending, he too is unfavorable.

But Rogan’s political leanings are scattered. On one hand, he hosts conservative thinkers on his podcast; on the other, he voted for Bernie Sanders (D-VT) during the 2016 presidential primaries and smokes marijuana on and off the set. His podcast also invites a broad array of perspectives onto his show: Demi Lovato, Dave Chapelle, and Tulsi Gabbard (D-HI) are a few examples of politically left-leaning guests. In no way is Rogan living in a bubble.

Regardless, publishers like Variety claimed Young’s protest caused Spotify to lose over two billion dollars. However, the cause of the loss is unclear: is it Young’s protest or Spotify’s decreasing market value ever since the easing of the pandemic?

Young has sparked some movement amongst artists, but nothing substantial enough for Spotify to remove Rogan’s podcast. Some might recognize the names of Joni Mitchell and India.Arie, but many young music listeners don’t. What about David Crosby, Stephen Stills, and Graham Nash, Young’s former bandmates? Not ringing a bell – me neither. Well, you can’t forget about Nils Lofgren, guitarist for Bruce Springsteen’s band. Never heard of him.

But Young’s efforts weren’t completely fruitless. Spotify took down a few of Rogan’s past podcasts designated as misinformation, but that wasn’t enough for some. Days after the conflict seemingly faded away, a video compilation of Rogan using the n-word was published, re-sparking outrage.

Importantly though, every clip in that video consisted of Rogan using the word in the context of a direct quotation or with no intention to hurt. Examples range from directly quoting a rapper’s lyrics to discussing the mystical charge the n-word exerts in society compared to other racial pejoratives.

The attack follows a popular pattern used amongst self proclaimed “social activists”: search through your enemy’s history, find something you deem offensive, then use that historical event to obliterate their influence by portraying them as a villain to society. Interestingly, there’s a double standard for anyone who openly supports the Left; you won’t see President Biden, who, like Rogan, has directly quoted others using the n-word being canceled anytime soon.

Unfortunately, the good-willed effort to eradicate racism has unjustly harmed our ability to say certain words, regardless of context. It doesn’t matter if we’re singing a song in the car, reading from a book or script, or describing why certain words are taboo – all those examples are equivalent to inciting racial violence, according to cancel culture.

The few who want Rogan canceled are the same few who believe deleting a word from the English language will solve racism – but it won’t.

What they don’t understand is that we, a society, need examples of the bad if we are to distinguish the good. It’s hard to imagine anyone canceled for quoting the n-word fifteen years ago; that’s why schools read To Kill a Mockingbird and The Adventures of Huckleberry Finn. In those pieces of literature the authors used the n-word to exemplify what racism is and why it should be avoided. However, if we eradicate the examples, we eradicate the evidence and the conversation of why racism is a plague to society.

Rogan’s podcasts are no different from the books. He used the n-word to exemplify our current culture, not to insult someone. And in regards to him quoting rap lyrics, his intentions were not hateful. Anyone who is offended by a non-black person quoting the n-word in a lyric is simply offended by an auditory stimulus, which disregards intention. Intentions matter.

But regardless of everything thrown Rogan’s way, none of it is his biggest enemy. That designation falls onto himself. What Rogan mistakenly did was apologize. He somewhat apologized after Young’s initial tantrum but stayed firm on his beliefs. He promised to better “research these controversial topics, and have all the pertinent facts at hand.”

After the n-word compilation surfaced, he apologized for doing “the most regretful and shameful thing [he’s] ever had to talk about publicly.” And though some people consider any use of the n-word unjustifiable, apologizing to a mob unwilling to forgive is a quick way to get kicked off Spotify. For one, his fanbase isn’t abandoning the podcast. And those who are so sensitized to any utterance of the n-word despised Rogan long before this controversy.

My favorite quote from those commenting is the following: “Apologies are an exercise in futility. They have no intention of forgiveness.” In short, this encapsulates the entire agenda of people who are only using Rogan’s words as an excuse to silence another free-thinker.

Joe Rogan still stands today being just as successful prior to the confrontation; the only effect seems that he’s more agitated toward the political left. Most recently he stated “I will quit [Spotify] if I . . . have to walk on egg shells,” bringing this controversy to a bitter close.