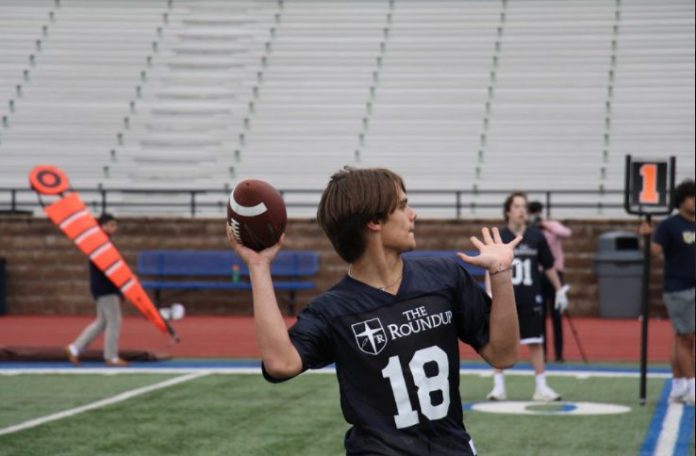 Jesuit had an incredible season for athletics this year, with athletes from the class of 2021 all serving as captains who lead their teams to victory. Rugby won state. Lacrosse won state. Basketball went to the regional final, making their best run in history. Hockey went to the national quarterfinals. Soccer went to the regional semifinals. Baseball went undefeated in district. The list goes on and on.

The game was slightly adjusted to make it more fair and fun. We played in a 60 yard field with only three downs and 15 yard first downs. Regardless, the newspaper staff put up an outstanding game against this year’s senior class. Our staff produced the best result in Expository Bowl history. The underdogs only lost by one touchdown in the dying seconds of the game. A fast-paced, back-and forth 7 on 7 game, the game was close through every quarter with the football team narrowly escaping defeat by winning 63-56.

After winning the coin toss, the varsity football team, on their first possession, threw an interception caught by lunchtime recruit Connor McSorely ’22. This really set the tempo for the entire game. A highly offensive game, both teams went back and forth throughout the first half, as the game looked very even. The Roundup came energized and ready to play, showing they had more to offer than just words typed on a screen. Touchdowns from Ajay Bhavan ’21, Luis Osorio ’21, Connor McSorely ’22, and both captains Major Kent ’21 and Ryan Schurr ’21 set the tone. But the football team used their experience and sheer ability to edge the Roundup’s intensity. Touchdowns came from Jake Taylor ’21, Charlie Cook ’21, Jack Judson ’21, and Charlie Clements ’21 slowed some of The Roundup’s game.

Towards the end of the first half, it began to be a little bit more difficult for the newspaper staff. The football team capitalized and went into the half with a 14 point lead down 42-28.

Down by 14 points, The Roundup was ready to fight back and go for the win, using a rehearsed trick-play to get Ryan Schurr ’21 a 60-yard touchdown. The game continued to go back and forth throughout the third quarter with the football just holding on to their one touchdown lead. But luck turned the page…

Throwing an interception to Diego Elizondo ’21 with 7 minutes left in the 10 minute quarters, The Roundup had the chance to tie the game up, failing to do so. It seemed to be game over, before the newspaper held the team on lockdown, receiving the ball with only 2 minutes left in the game. The crowd cheering them on, the team rallied to the red zone with important catches by Bhavan and McSorely to get them within three yards of the endzone. Finishing off the drive, quarterback Logan Thompson ’24 was rushed by the players before throwing a nice low pass to receiver Jason Davis ’21, who tied the game at 56-56.

It seemed to be all said and done, with the game being tied at 56-56 with only 1 minute left in the game. But the football team made one last push to win it all. With a final catch by Charlie Clements ’21 in the dying seconds of the game, the seniors crushed the Roundup’s dreams to win the game once and for all, finishing the game at 63-56.

Despite the tragic ending, the game was fun for everybody involved, and a great experience for both the football players and the newspaper staff. With the best performance in history, the Class of 2021 seniors really led the way for this great game. It was a fantastic way to end off the year, and we want to say thank you to Coach Hickman, Coach Short, and Coach Maturi for making this happen!

Check back to The Roundup for more coverage of the Expository Bowl!