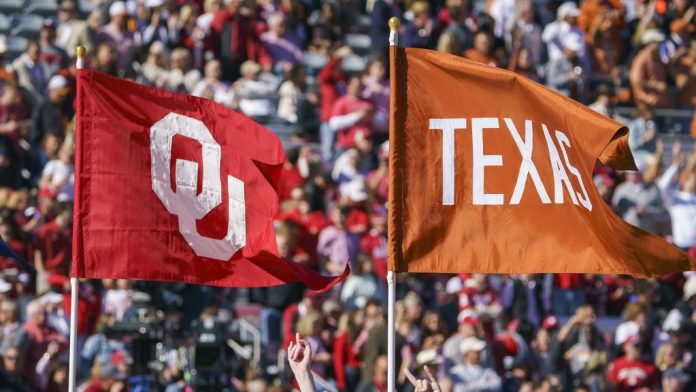 If the college football world isn’t crazy enough, this right here takes the cake: Two of the biggest names in college football are leaving their conference to join a new and more beneficial conference. They plan to give themselves better competition, and of course, we can’t forget about the money. Here we go.

One of the biggest controversies of college football history just began with the two biggest teams in the small but deadly Big 12 football conference. The University of Oklahoma at Norman and the University of Texas at Austin decided their reign in the tiny 12 team conference would cease to exist. They announced on Monday that they won’t renew their TV media agreement with the Big 12. They have established to the college football world that they will be joining the notorious SEC conference, known for their intense and powerful football teams.

Turns out these two powerhouses were actually authorized into the SEC later that week.

Even though the two blue-blood teams of the Big 12 are divorcing from the conference they still plan to “honor their existing agreements” through the 2024-2025 term of their enrollment into the new world of football.

The SEC is Gaining Two Powerhouses

Since the two teams are divorcing from their previous miniature conference, they decided to join the biggest conference in college football.  The two teams plan to play in the South Eastern Conference and compete against the top teams in the country for their dreams of a national championship. This means going up against the best of the best teams in the country. Teams like, Alabama, Georgia, Clemson, Florida, Auburn, LSU, and many other National Championship contenders.

The two massive colleges informed the Big 12 Conference committee that they will not be renewing their media rights by the expiration of 2025 of their surprising admission into the new conference. The two enemies have decided that they will begin their reign in the SEC in the fall of 2025 to test their luck and skill to have a chance against the top dawgs of college football.

In Need of Similar Competition

There are countless reasons why these two powerhouse football schools have decided to depart from the other conference. These two teams strive to have the best players in the country so joining a more popular and more competitive conference would be ideal and insanely advantageous for the programs. OU is always tired of winning the Big 12 championship and playing trouble-free teams that would not assist them in getting ready for a National Championship which is what their ultimate goal is. If you follow college football, you most likely know Oklahoma is the king of the Big 12, and they, typically, absolutely demolish any team that stands in their way. The Sooners are “sick and tired” of playing boring, no-effort teams and so they end up filing for divorce from their lifelong era in the Big 12. The current top 10 team in the nation begins their quest for a national championship at the hands of the SEC in a few years.

I interviewed a few members of the Jesuit staff and their opinions are surprising.

Our first individual is Don Woods. A legend in the football coaching industry who is also our head defensive coordinator here at Dallas Jesuit. Here are his combined thoughts on this controversy, “it is an inevitable thing that would have happened eventually.” This is very true regarding that Oklahoma and Texas would kick anterior every year. “It will also renew some rivalries that we haven’t gotten to see between schools over the last few years with OU and Texas playing Alabama, Clemson, Georgia, and many other giants on the college football island.”

We have also received information on the matter from the famous English teacher Ian Berry ’07 (UT alum of 2011) shaking his head ruefully, “It will ‘kill’ the Big 12.”

The two colleges received an invitation from the SEC to join their conference which would end up making the two schools more money and the SEC more money, so everyone pretty much wins; well except for the Big 12 of course. The two bosses of the Big 12 would be granted their wish on encountering harder and more intense competition rather than all of the unranked teams of one of the smallest conferences in college football, so for these two teams to finally get their chance to fold from this league is extremely beneficial for the players and the program. Even if OU and Texas wanted to commence their SEC debut in 2022 they would have to owe up to $80 million to the Big 12 as a penalty for leaving before their initial TV contract expires, so the two decided to stay in their home for the next 4 years until they are obliged to appear in the next level of college football.

That’s it for this piece, but stay tuned to The Roundup for more college football and sports news!