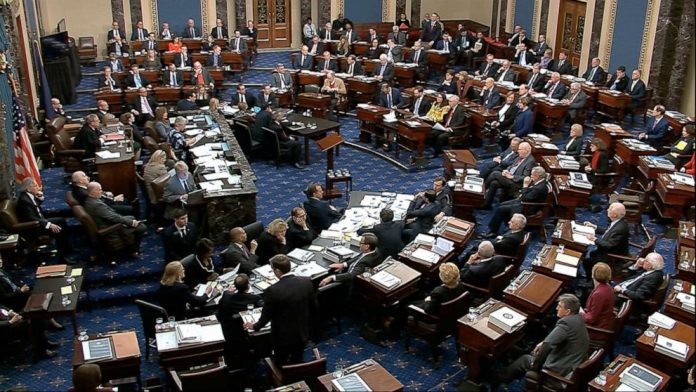 In the shortest impeachment trial in U.S. history, the Senate voted 57-43 to acquit former President Donald Trump, finding him not guilty of inciting riots on Capitol Hill. It was Trump’s second impeachment trial, and seven Republicans joined all fifty Democrats in an attempt to convict the former president. 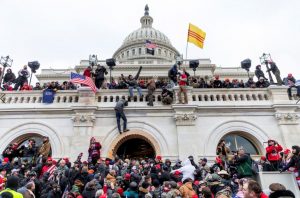 On January 6, 2021, riots erupted at the United States Capitol in Washington D.C. As Congress convened to certify the electoral votes of the 2020 elections, President Trump held a rally nearby, publicly opposing Democratic Nominee Joe Biden’s victory on the basis of supposed election fraud. President Trump then advocated that his supporters march to Capitol Hill to protest the certification. Fueled by accusations of an illegitimate presidency, many of Trump’s supporters took to protest, ultimately storming and successfully breaching the Capitol. The rioters violently broke in, loitered around, looted, and vandalized the Capitol, even reportedly searching for certain members of Congress in an attempt to potentially take them hostage.

The House of Representatives Trial

Motion to Dismiss the Senate Trial

The prosecution and defense debated the constitutionality of the Senate’s jurisdiction in trying a former president, leading to a Senate vote of 56 to 44 in favor of proceeding with the trial. The Senate’s verdict was largely supported by a precedent: the 1876 impeachment of war secretary, William Belknap, whom the House impeached following his resignation. This precedent supported the legality of an impeachment of a government official even after removal from office.

Both the House prosecution and President Trump’s defense presented each party’s case over the course of three days. 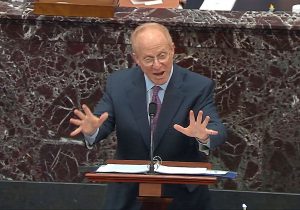 On February 9th, President Trump’s second defense attorney, David Schoen, argued that the trial stemmed from “the insatiable lust for impeachment in the House for the last four years.” Schoen then presented a montage, compiling many of the lead House prosecutors’ public statements calling for Trump’s impeachment even at the start of his first term. Such Representatives included lead impeachment manager Jamie Raskin, Representative Maxine Waters, Representative Alexandria-Ocasio-Cortez, and Representative Elizabeth Warren, among others. 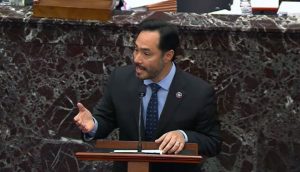 On February 10th, House prosecutor and Representative Joaquin Castro addressed the Senate jury, stating, “Senators, you’ve seen all the evidence so far, and this is clear, on January 6, President Trump left everyone in this Capitol for dead.” To buttress claims of Trump’s indifference to Capitol violence and illustrate the true threat of the Capitol riots, the prosecution presented its own video evidence, never-before-seen footage documenting the evacuation of the Senate. The video shows Senate Majority Leader, Chuck Schumer, nearly escaping oncoming rioters. As Representative Eric Swalwell claimed, Schumer’s close proximity to the riot mobs was within “just yards.” 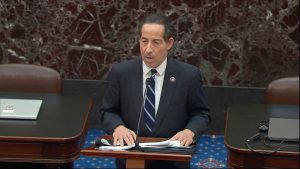 On February 11th, lead impeachment manager Jamie Raskin claimed, “The insurrection was the most violent and dangerous episode so far in Donald Trump’s continuing pattern and practice of inciting violence — but I emphasize ‘so far.” Raskin suggested that Trump’s previous behavior of “inciting violence” indicated a premeditated attack on the Capitol, one that had been gradually suggested to his followers for years leading up to the riots on January 6th.

On February 13th, the House called for a surprise Senate vote to allow witnesses in the trial. The Senate voted in favor of calling witnesses. However, House prosecutors ultimately dropped the call for witnesses in a compromise with Trump attorneys.

Had witnesses been called to testify, House Minority Leader Kevin McCarthy may have given incriminating evidence against Trump. Numerous legislators confirmed a CNN report claiming Representative McCarthy had reportedly called Trump in a panic during the Capitol riots. According to Republican Representative Jaime Herrera Beutler, “When McCarthy finally reached the president on January 6 and asked him to publicly and forcefully call off the riot, the president initially repeated the falsehood that it was anti-fascist that had breached the Capitol.” McCarthy reportedly corrected Trump, insisting that the President’s supporters had breached the Capitol. Representative Beutler claimed that Trump responded, “‘Well, Kevin, I guess these people are more upset about the election than you are.’” This suggests that President Trump made little to no effort to stop Capitol rioters.

On February 13th, in a vote of 57 to 43, the Senate acquitted Trump, falling short of the two-thirds majority needed to convict him. Seven Republicans voted against party lines in an attempt to convict the President, marking the largest number of Senators to vote against their party in an impeachment trial.

The seven Republican senators were:

-Bill Cassidy of Louisiana (just won and not up for re-election until 2026);

-Susan Collins of Maine (just won and not up for re-election until 2026);

-Benjamin Sasse of Nebraska (just won and not up for re-election until 2026); and

Speaker of the House, Nancy Pelosi, who had initially sparked calls for Trump’s impeachment, issued a statement regarding Trump’s acquittal. Pelosi stated, “Donald Trump’s incitement of insurrection against our Democracy put Senators, Members of Congress, staff and heroic law enforcement officers in mortal danger. It is the most grievous constitutional crime ever committed by a president and is clearly deserving of conviction… Tragically, Senate Republicans who voted not to convict chose to abandon the Constitution, the Country, and the American people with this vote.” 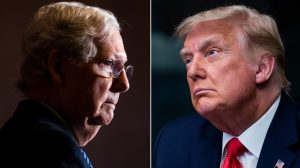 Senate Minority Leader Mitch McConnell reflected on the verdict, stating, “the best constitutional reading shows that Article II Section 4 exhausts the set of persons who can legitimately be impeached, tried or convicted. It’s the president, it’s the vice president and civil officers. We have no power to convict and disqualify a former officeholder who is now a private citizen.” However, in an incisive dig at President Trump, McConnell continued, “We have a criminal justice system in this country. We have civil litigation. And former presidents are not immune from being accountable by either one.”

Following his acquittal, President Trump issued an official statement in which he thanked “all of the United States Senators and Members of Congress who stood proudly for the Constitution we all revere and for the sacred legal principles at the heart of our country.” Trump continued, “This has been yet another phase of the greatest witch hunt in the history of our Country. No president has ever gone through anything like it, and it continues because our opponents cannot forget the almost 75 million people, the highest number ever for a sitting president, who voted for us just a few short months ago.”